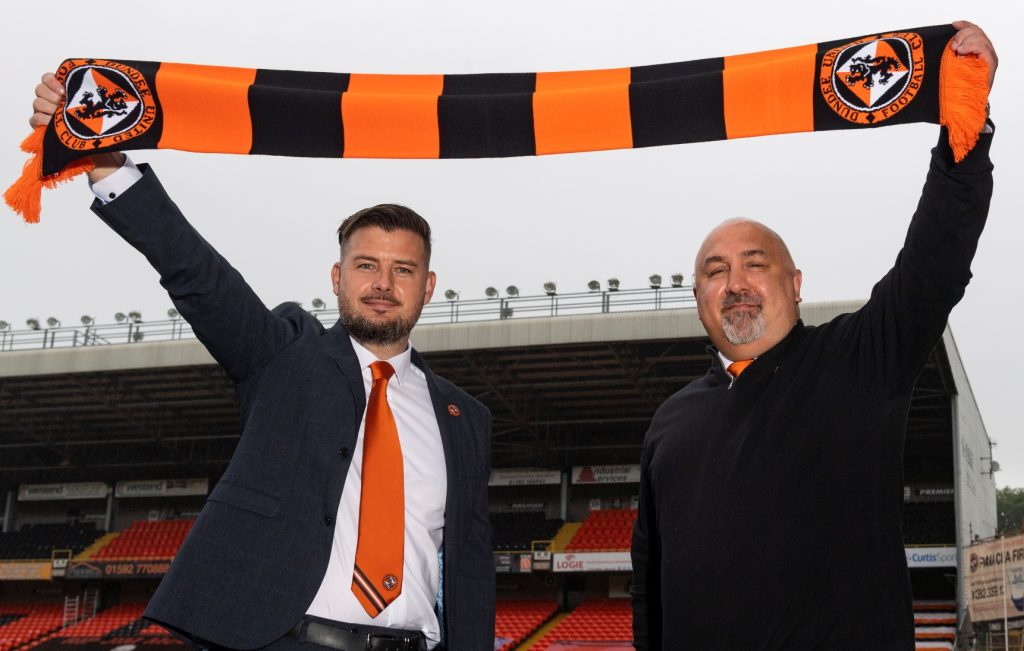 If Tony Asghar’s playbook only had one word written in it, it would be innovation. It is the phrase which summarises all the decisions and achievements the Dundee United Sporting Director has made since pulling one of the biggest names in Scottish football from second-tier mid-table mediocrity to qualifying to play European football next season.

“We are constantly looking at what’s new out there to make us better,” he said. “If you don’t, then you’ll be left behind. We are a club that wants to be innovative. Some things we have brought in haven’t worked, some will. But the most important thing is we are always growing, we are always learning.”

It is a philosophy which has permeated through the club since he joined owner Mark Ogren in 2018. They set a five-year plan to get the club back to the glory days of European football and producing names gracing the world’s biggest games – from Duncan Ferguson to Andy Robertson.

It is not only what the owner wanted, but what the fans wanted and staff who were already at the club. They wanted a refresh of the strategy to get them there. And Tony is proving that by sweating the small stuff, you can change the bigger picture.

“I don’t think we were thinking big,” he added. “I think we simply think like a top-level, high performance football club. That’s what Dundee United should be. Nothing we are doing now is any different from what the successful Dundee United teams of the 80s or 90s. We are trying to work smart to keep up with Joneses, if you like.

“A lot of people get hung up on being data-driven. We are data-informed. There is so much technology out there now that if you don’t use it, you will miss out on the small margins that help you win games.

“All departments work together. There are no silos of ‘that’s the academy’s job’ or things like that here. We all sit around the same table and support each other.”

The creation of a unified United had to start at the top if it was to succeed. Tony’s role sees him take a holistic overview. He leads strategy and delivery at all levels at Tannadice – from the First Team to the potential future stars at the academy. He hires all the key staff, including current First Team manager, Tam Courts.

Most did a double-take when unknown Courts was given the job after well-knowns Micky Mellon and Robbie Neilson. But Courts was on the new Arab adventure already, working as an Academy Analyst, which shows innovation can come from inside. Tony’s hands-on approach in recruitment has helped accelerate that journey, as he knows which tap to open and when to fuel the extra 1% required.

Two challenges were in his in-tray when he arrived. Get United back in the Premiership and rebuild a once-renowned academy. But you can’t ‘bring on the kids’ straightaway, as that would put too much pressure on the academy which needed time and fresh faces to build. So, Tony turned the tap on external recruitment and their first transfer window saw 12 players in and 10 out.

“When we came in, I met Brian Grant the Academy Manager at the time. He’d been there 11 years and had overseen quite a lot of the positive young players that came through before. When we spoke, we knew right away the foundations of a great academy were still there – we just needed to be innovative to get it back to its potential.

“I brought in Andy Goldie from the SFA as Academy Director to support that team and we made a significant investment in kit to supercharge the growth potential. We knew if Dundee United was to return to its full potential, we had to make the academy a success again.

“But, we knew we had to recruit senior players straight into the side. Not only to bring some results in, but also to take that early pressure off the redeveloping academy.”

Now, however, the academy’s tap is turned on to contribute to the pool of talent at Tannadice – and also to the wider benefit of football.

Aside from 15 Academy graduates who have played for the First Team, United starlets have also shone for other SPFL teams from Kilmarnock to Cove Rangers, and been sold on to English sides, such as Northampton Town’s recent purchase of Louis Appere.

“We instantly had the challenge of coming out of the Championship. We then had Covid after we’d established ourselves in the Premiership. It’s now probably the right time to identify players that are going to formulate a successful Dundee United side for the future,” he continues.

“Now we are asking what type of players we can look at from a development stand point, ones we can pick up and develop into our way of thinking.”

The cheque book is not being put away yet, though, and external talent is still being scouted – but with the same laser-focused thinking on what each player holistically brings to the future football philosophy of the club.

“We want to work with good people at our club and people who are winners that we can go on a journey with. The manager and I speak about a lean and versatile squad with players who can play in more than one position.

“We want strong characters; we want players with the belief they can win things. Charlie Mulgrew and Tony Watt are examples of this. Whilst others might have found it odd that we were signing a 36-year-old in Charlie – he’s proved he’s hungry to achieve much more. And Tony has had the second-highest shot accuracy in the league right now. “

On paper, the recruitment philosophy sounds like a fan’s dream, but it is also founded in the economic reality of the market football operates in.

“I want the players to identify with this club, whether they are here for a long time or a shorter period. Some may come here because they think it may be a stepping stone to the English Premier League or the English Championship.

“We have made it clear that we must sustain the club as a business model. But make no mistake, my job as a Sporting Director is to get success on the pitch and make sure we are winning games.

“If those players we bring in are of benefit to the here and now, yet there is a chance we can sell them on at the right time where they won’t make our squad lighter then we will do it. Players are ambitious. There’s such a big pot of gold at the end of the rainbow for some of them.

“We are the club that can help them realise that ambition – and we have the results to prove it. We’ve had four or five players leaving this season and they moved at a time where we felt it worked for us all.”

And it is innovative horse-whispering like that from everyone involved in player development that gets deals over the line.

“Player Welfare are buzzwords you hear a lot about in football. But it happens here and that’s why we often find players here we supposedly would not be able to go for budget-wise,” says the club’s Recruitment Co-ordinator, Sean McGee.

“That’s either showing before they’ve joined that we have worked out how we can help them with those higher goals or ensuring they have no personal worries and supporting life’s challenges, like admin and settling into the city.”

And it is that hunger for the extra one percent which drives Tony’s desire for future growth.

“We brought in a Head of Football Research,” Tony states. “Fans will say ‘what do you need that for?’ But we need to look at everything we do to get the best out of our young players, coaching or analytical staff.

“One student came in wanting to research some concepts around Fan Engagement. We said yes and now we have learned so much that will feed into our work.”

“Football is a simple game. But now athletes are asking for more. They want to know how they’ve trained down to the small margins – so we make sure we have the tech to do that. They’re talking about what’s in their food; we brought in a chef who had worked at five-star hotels and wanted to get into football and provide nutritional advice.

“We talk a lot about the 1983 [title-winning] team. Jim McLean was doing some of these things then. We are taking that and adapting it with new words, a new narrative.

“Small margins make a difference and can win you football matches.”