In the latest instalment of Managing in the Modern Game, a series of interviews looking at specific elements of football management through the eyes of those involved, Dean Eldredge of Oporto Sports Management speaks to former England manager Sven-Göran Eriksson about the importance of correct logistical preparation for a major tournament at international level, managing media and supporter expectations, and what he would have done differently during his five-and-a-half years in the Three Lions hotseat…

Sven, who has had the biggest influence on you in football?

I would have to say, in my coaching career, there is no doubt that it would be Tord Grip. I learned basic skills from him as a player, before he took me as his assistant, and some years later I took him as my assistant. I learned a great deal from him and we worked well together.

What are the main challenges for a manager when preparing for a major tournament at international level?

Especially for England, the big issue I feel is how tired the players are going in to the tournament. Ahead of the Euros, you have two English teams in the Champions League final, one in the Europa League final, and a long tiring season for all of the Premier League sides. There is too little time between the end of the season and the tournament, and I feel it has a big effect on the England team. English players play more games than other European nations, as the league is bigger, and you have two domestic cup competitions, plus European football and internationals. I think it is a big issue. When I was in England, I was fighting for years for a bigger rest period, for a winter break, to help the national team. I think with the small break in January it helps, but to play European finals and then a couple of weeks later to play in the Euros, it’s not fair at all.

I remember for my first World Cup, with England in Japan, I took a physio with me from Holland, and I asked him, after he’d spent some time testing the players, ‘How shall we start the physical work?’ and he answered, ‘Sven, send them to the beach and let them do nothing, as they are already dead.’ Of course we couldn’t do that, but when you start your preparation with players physically exhausted from a long season, it is far from ideal. It was more or less the same when I was managing Ivory Coast as well, as many players played in England and in Europe. I am sure that Gareth Southgate and his staff will do their best to ensure the players are in good condition.

You have managed four different countries in your coaching career; England, Mexico, Ivory Coast and The Philippines. What were the main differences between those roles?

Well, you cannot really compare England with the other three countries. Mexico is okay and reasonably organised, Ivory Coast was okay, but with The Philippines, with all respect to them, the organisation was not at the same level. England, on a scale of 1 to 10, is 12. The organisation from The FA of England is absolutely incredible. They are top, top class, working for the players, the coaches, the manager, for everyone. During my five-and-a-half years with England, they did nothing wrong, and I suppose you could say they are the best in the world at what they do.  All the qualification and friendly games were perfect.

There was little pressure on me with Ivory Coast and The Philippines, but with Mexico they want to reach the quarter-finals of a World Cup, that is their target. It is hard to compare to England as the expectation is to win every game and every tournament, or at least it was when I was in charge. It has changed a little now.

How hard was it to manage the expectations of supporters and the media during your time as manager of England?

It was very difficult. We won the qualification groups with style more or less, and with some great performances, perhaps apart from Northern Ireland away of course. Winning our groups, beating Germany away 5-1, the results against Turkey just added to the excitement and the expectations.  I think that today, a quarter-final or semi-final may be regarded as okay, but in my time it was not okay. It depends largely on how the press treats the team. You hope that they will be honest on how good you are and how good the other sides are. Remember, football is not only played in England.

Do you have any regrets from your time as England boss? Three quarter-finals, two defeats on penalties, how close were you to reaching a final?

The first thing I would have changed would have been to take a sports psychologist with me to the tournaments, which would have helped with preparing for penalties perhaps. The longer I am outside of the England job, the better my record as manager looks. We had a good chance in all of the tournaments, and I felt sure we would reach the final in 2006, but that’s all history now. I think England will have a good tournament this summer, and they have a chance of going far. You need your key players though, and Harry Kane is the match-winner for England. He is a big goal-scorer, a fantastic footballer, and he is the man that could lead England to winning a trophy. 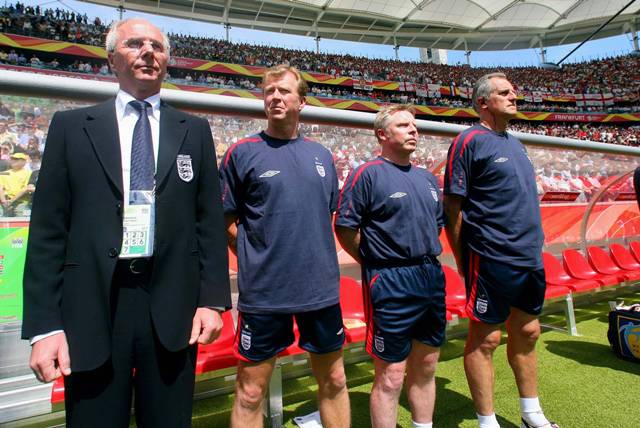 Looking at the logistics of a tournament, can you talk to us a little bit about some of the people behind the scenes and the work they do to ensure that everything is organised well such as travel, accommodation, and care for the players and staff…

As I’ve said, the organisation at The FA was first-class. I had three secretaries who worked for The FA, and they went out to see the bases where we were staying during the tournaments, along with other staff, and they didn’t see one, I think they saw possibly ten venues. They narrowed this down to two or three, and then I viewed the shortlist in person, in Portugal, Germany and so on. Then we decided together which was most suitable. After this, you have to consider how well they equipped the hotels, the food, the facilities, everything tailored to the team perfectly. We would take the whole hotel, and that was a huge job to get right.

At club level, you don’t travel to see all of the hotels, as you only really stay one or two nights. You want a nice hotel, not a lot of noise, good standard of accommodation and something for everyone to do in their social time. The FA always did a good job of providing the best surroundings for us.

Ahead of this summer’s Euros, what are you most looking forward to about the tournament?

We have no other occasions to compare with for this tournament, regarding Covid-19. The pandemic has put the whole world on hold, more or less. We all hope that supporters will return to the games and we look forward to that. Even if you watch games on television, the difference between fans and no fans is huge, so what it is like at the stadium itself, it has such an effect on everyone involved.

I watch too much football! I see the Premier League, Swedish, Italian and Spanish leagues. I watch three or four games a day some days. Many people in football haven’t enjoyed watching the games without the atmosphere and the emotion of the fans. I find it a little disturbing to hear all of the screaming and comments of players and managers during the game too.

You have your own podcast in Sweden called Svennis & Bjorn. What else do you have planned for the future? Would you still like to coach or work within football?

If something came up which interests me in management or coaching, or within a club structure then yes, I would love to work again. I still feel I have plenty to offer and can still do the job, but if that doesn’t happen then I am fine. I have a good life, and to have that you have to be healthy, and I have my health. I walk and run regularly, and I look after myself. I am lucky. I am very busy still, watching a lot of games, offering advice to people, doing lots of media work, and I am enjoying the podcast too, it has been good fun and has created some interest in Sweden. When it is safe to travel again, I will go around Sweden and do some talks about leadership and sport. Of course though, to sit on the bench is something I would love to do.

You know how life is, you are sitting in front of the television, watching a game and looking at the manager thinking, ‘What the hell are they doing?’ But, it is much easier to be a good coach from your sofa, than it is to be on the bench. When you are a manager you have to make decisions before something happens, but from the sofa, you can speak and criticise after something has happened.

In England, Sven-Göran Eriksson may be remembered for the Golden Generation, penalty heartache and tabloid headlines, but in reality that tells us nothing of one of the most decorated managers in the game’s history. Winning 22 trophies across three different leagues, managing four nations, at three World Cups, and sitting on the bench for over 1000 games is simply remarkable.

Sven’s obvious influence can be shown through the number of players inspired by him to go in to management, including the likes of Roberto Mancini, Diego Simeone and Sinisa Mihajlovic to name just a few.

At 73, and still actively involved in Swedish football, alongside his extensive media duties, Sven is keen to utilise his extensive experience to work in the game he is still so clearly in love with, the game which has given him so many opportunities and memories, with time left to create a few more.

I would have to pick out three times in my career; Gothenburg in the 1980s, winning the UEFA Cup, that was why I had the chance to travel the world for professional football, then in Italy, winning trophies  with teams who are not Juventus, AC Milan or Inter Milan, that was very big, and they treat you well then. The biggest job I had was England. It was and still is the biggest job in football, I feel. You are proud to have the job, and I am still proud now to have managed England; a lot of good games and incredible memories, which I will never forget.