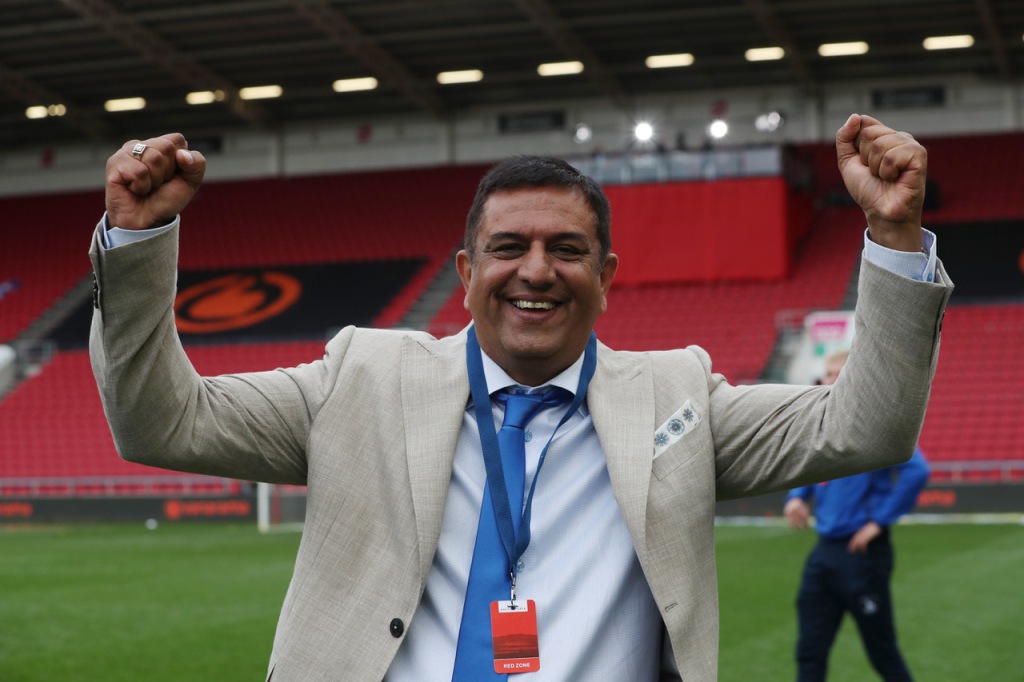 How Raj Singh is using the lessons from his first foray in club ownership to give Hartlepool United a second chance.

Born on Teesside, Raj Singh’s first taste of football was at Ayresome Park watching Middlesbrough in 1978 which would start a love affair that has seen him take the helm of two North East clubs with differing success.

Singh’s journey to club ownership started like most do by experiencing the highs and lows of the game from the terraces before developing a successful business in building and property investments. And it was through this business that led him into his first, and rather unforgettable, stint as a club owner.

A business deal with Darlington FC’s then chairman, George Houghton saw Singh invest £1.2m into the troubled club in November 2008, but by January 2009, the club had gone into administration.

“Straightaway, I was involved as a director for two months but my name was tarnished because the club went into administration,” he recalls.

“I had a choice of either forgetting about the £1.2m after a few months and write it off or try and take over the club. I started talking to the administrators and in August 2009, we ended up, a day before the new season was due to start, taking over the club.”

That was the start of what would be a baptism of fire in club ownership and despite his best efforts, the club was eventually relegated from the Football League into the Football Conference.

Away from the game, a banking crisis was unfolding which was effecting Singh’s core business as he recalls: “2010 was tough, but in 2011 we [Darlington] managed to get to Wembley and won the FA Trophy Final. However, strain was showing in my business so I had a tough call to make – do I keep pumping money into the club or do I lose the business I’ve built up over the last 30 years?

“That’s the bit I think Darlington fans have never understood but I had to walk away, I was up against it from day one.”

In 2012, Singh decided to pull out and the club fell into administration and eventually, despite the best efforts of the club’s fans, was expelled from the Football Association and wound-up in the High Court.

It would take Singh a few more years to get his core business back on a firm footing but his experience at Darlington always played in the back of his mind. But despite the vitriol that was directed towards him and the losses he incurred at Darlington he never quite lost the drive to get back into football and when Hartlepool United’s honorary President, Jeff Stelling came calling for investment in the club he famously supports, it was hard for him to turn down.

Investing an initial £1m, Singh had a number of issues to overcome that had put off many potential buyers for the club that had been relegated from the Football League and were in serious danger of relegation from the National League.

After over 3 years in charge, Singh’s investment in Hartlepool now stands at around £3m, but there are signs that things are getting better under his tenure, however, he is still open to welcoming further investors into the fold. In the meantime, he is working through a plan that is starting to bear fruits with Hartlepool staging a revival both on and off the pitch.

The club won promotion back to EFL League Two at the end of the 2020/21 season whilst showing their competitive edge in the FA Cup and Papa John’s Trophy competitions this season, all of which is helping to build the club’s commercial base back up.

“We’ve taken our time and there has always been a plan to get the club on a sound financial footing,” he continued.

“When you get back in to EFL, the money helps massively. When I first came in to the club I was putting around £100,000 in every month and you wonder when it’s going to stop. Now we’re on a good sound footing and when you’re winning matches you are reminded that this is exactly what you’re in it for.”

So are Hartlepool benefitting from the lessons he learnt at Darlington?

“I was in the same situation that the club was in a financial mess, but I wasn’t in the same position that I had no one around me to help. I made sure that I got football people around me, so in came Mark McGuire as CEO, he had knowledge at this level and had contacts in the game to help.

“Ian Scobbie was also involved at the time who was a massive non-league football man and had great knowledge of the game at that level, as well as Craig Hignett who had links with the club. All those people allowed me to get my feet under the table. It was still an uphill task but it was a little bit easier as we didn’t allow the position get any worse.

“Like in any business, when you go on a downward slide the first thing you’ve got to do is try and slow and stop that, then you can start thinking about going up. We managed to stop the rot unlike at Darlington where it just kept going and going. Since then we’ve slowly bettered ourselves and our position.”

One of football’s hardest jobs is managing expectations and in order for Hartlepool to rebuild, Singh has had to ensure that whilst the club remains competitive on the pitch, it is done so in a sustainable manner.

“As much as fans understand football, they always want to see big signings, they always want to be ambitious but that is dangerous. When you get relegated you can’t just throw a bit of money at it and hope you’ll come straight back up. That’s the cardinal sin in football because it never works like that.

“We had guys on £13-14k a week in the non-league who just weren’t good enough. That makes the job immediately harder because you have to deal with those contracts and try and get them out. That was the difficulty we had to manage in the first year.

“In the second year we steadied the ship a little. Dave [Challinor] came in and despite how it ended, was the main reason why we managed to turn things around. He took a lot of the work away from us on the football side by bringing in good quality players who were value for money or who wanted to come and play for us. He identified the right type of players for that team, the environment and league and who were right for the challenge.”

Whilst things started looking better for the club on the field, in the business there was still the need for a further shake-up to revive the club’s commercial base which has included a number of key appointments.

“In the non-league your revenue goes down,” Singh states. “Your sponsorship levels go down, your advertising and your crowds often go down. We didn’t know if we would get promoted in 3 years or 6 years so we had to gear ourselves up to survive no matter what.

“It’s really really tough when you decide to make a change. We knew there was a lot to do. There was a lot of misuse of season tickets, abuse of the concessionary tickets and misuse of the facilities so we had to do something about it. Unfortunately after a year to 18 months we were still talking about it so that’s when I decided to change at the top once again.”

Key appointments would be made to shake-up the business structure which included hiring former Carlisle United commercial director, Phil King on a temporary basis. Steve Hobin joined as chief operating officer and Rose Stoker as head of operations along with former Club England managing director, Adrian Bevington joining as a non-executive director in 2021.

“In the non-league you don’t want to saddle the club with wages but at the same time you need people in to save you that money so there’s always the question ‘how much do you need to spend to save how much?’”.

Those decisions are starting to pay off it seems with the club recently announcing a new multi-year stadium sponsorship deal with Suits Direct, one of many new commercial deals, which has seen some key improvements and vital updates to the club’s home ground, Victoria Park.

But there is still further investment needed with the club assessing the value of a full modernisation programme across the stadium which would include the installation of new wifi systems, new EPOS and electronic ticketing and card readers.

However, those improvement rest on plans that have been submitted to redevelop the site of the stadium, which is owned by the local council, and will see the Mill House leisure centre which sits to the west of the stadium demolished and moved to the town’s marina opening up a wider space to develop a new 15,000 multi-purpose community stadium.

“We’re making slow progress with the council with the plans for the stadium but the plan is that the council will put in the additional land out that back that will become available with the closure of the leisure centre. That will allow us to redevelop that land with our stadium being the focal point. It will also feature office facilities and hotels.

“The stadium is dated now. It’s a lovely compact stadium but there’s a lot of money needed to bring it up to standard. But the council own it, not us, and we don’t want to get into a stand-off so talks are ongoing.”

Singh is clearly ambitious and has learnt a lot during his time in football club ownership. With Hartlepool there are lots of opportunities to further progress and despite the turbulent two years since the start of the pandemic, things are definitely looking brighter for the club that, like Singh, has been given a second chance.