The Changing Role of the Media: Paul Dickov 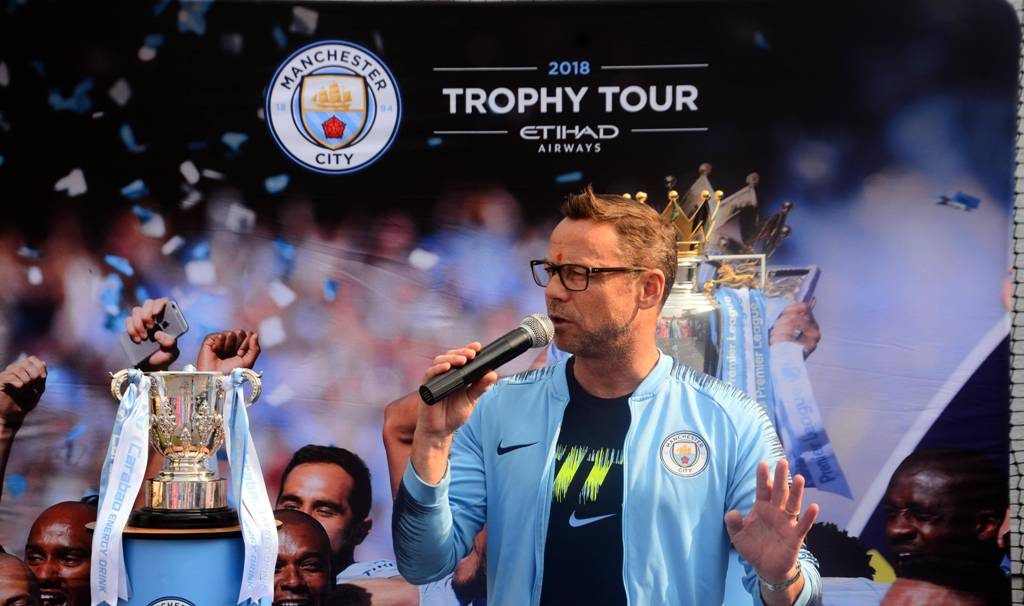 In the latest instalment of Managing in the Modern Game, a series of interviews looking at specific elements of football management through the eyes of those involved, Dean Eldredge of Oporto Sports Management speaks to former Oldham Athletic and Doncaster Rovers manager Paul Dickov about how the media has evolved from his time as a manager to his current role as a respected pundit and global ambassador for Manchester City…

What have you found to be the greatest difference between your media duties as a manager and in your current role as a pundit?

When you’re a manager, it can be tough to control your emotions straight after a game. I was excitable to begin with if we won, and so down if we lost, which would then impact on the mood of the team and the staff. I learned to be level headed and balanced in my view, and to be consistent in the build-up to games too. I stuck to my principles and to the philosophies we were trying to follow. As time went by, I became better at speaking to the media, but the demands on managers after a game are huge, no doubt about that.

In my role now, I tend to have more time to prepare, even if you don’t always know the questions you’ll face, you have a good idea of the subjects. I’m experienced enough to bring the theme back to what I want to speak about, while still giving the public some insight. I think it’s important to take your time, take a breath and think about what you’re going to say.

What do you enjoy about being a pundit and what are the main challenges you face in the role?

I’ve had situations such as a week or so ago, when a breaking news story happened while I was live on air. You can’t really prepare for that. A bit of anxiety can seep in, and the topic could be football related or it could be anything from the rest of the world. You just have to stay calm and take a moment to think about what you’re going to say. I do love my media work though, as I have the chance to talk about football, and I really do love the game. It’s what I’ve always known as a player for over twenty years and a manager for five. I’ve felt fortunate, particularly during the pandemic, to watch football matches and to be paid to talk about it. It’s a job I simply never take for granted.

How important is effective use of the media for a manager? Do players take notice of what a manager says in the media?

Well I did. I was always very conscious of what my managers said when I was a player. I know some players don’t, and players can be fickle and only watch interviews or highlights if they’ve played well or the team has won. I found Joe Royle and George Graham so clever in their interviews. They would reveal something, or send a coded or a deliberate message to a player, to get a response. I tried to take that in to my own management style when speaking to the media. If a player was struggling, I would offer them my public support and try to give them reassurances that they were on the right path. I used to make it clear that mistakes were okay, we all make them, as long as they recovered from them. I wanted to try and take the pressure off them and let them perform without the fear of failure.

Were there any particular managers who you looked to for inspiration or feedback to form your own approach to speaking to the press?

Probably the best bit of advice I received, and this doesn’t just cover the media side, but covered management in general, came from Sir Alex Ferguson, who said to take bits and pieces from managers and listen to advice but don’t try and imitate them, be Paul Dickov. He urged me to be myself, whether it was in front of the players or in front of the media, authenticity was really important. I often took advice from the managers I played for, or from those around me who I respected, but I knew I had to do it myself. Players are clever and they can pick up on things straight away. If they see you doing something different, not being yourself, they will know and immediately you’ll lose a bit of impact or respect.

If I had a problem player, or needed some advice, perhaps if we were on a bad run of form, the managers I looked up to would always help me, and I was grateful for that. As soon as you step away from that though, you have to act as you and trust in your own judgement as it’s your reputation on the line.

You work across television, radio, online, print and social media. How has your own style evolved since being a manager and embracing contemporary media formats?

I try to be light-hearted about what I do with mainstream media work and social media, provided it’s appropriate to do so. I was working for Manchester City for the UEFA Champions League final in Porto, in the Fanzone on stage doing a Q&A, before then working for the club’s partners all around the city. I think this kind of work has actually helped my media work, as I’ll have to jump from talking about football, to business, to general conversations, having to think quickly on my feet. I always do my research and ensure I’m prepared for those chats, to keep things relevant. It doesn’t matter who you are speaking to, it could be a viewer on Sky Sports News, a listener on BBC Radio 5 Live, or a partner of the City Football Group in Shenzhen or Mumbai, and you need to make it clear what you are talking about, and keep it relevant to them, so you can engage their interest. I feel as if this work has given me another string to my bow, and helps me to be prepared for whatever comes at me.

Would you be active on social media if you were a manager?

I think if I was back in management I would probably be a lot less active on social media. Funnily enough, my kids were badgering me to go on Twitter and after a few months of being away from football after my time managing Doncaster Rovers, my daughter persuaded me to join. More recently, I only opened my Instagram account during lockdown. I’ve found social media to be a positive way to promote myself, and to share my work, which has kept my profile out there and helped to build my media portfolio too.

What does the future hold for you, Paul? Would you consider a return to management?

I am asked a lot if I would consider going back in to management, and the answer is the old saying, ‘never say never’. It may be that I’ve been out for too long, but you never know. I am proud of what I’ve done as a manager. At Oldham, the finances were very tight. When I joined, Dale Stephens was loaned out, but we started to play him and then he earned his move to Southampton and did very well. I had a similar experience with James Tarkowski and look at him now. At times though, it felt as if I was banging my head against a brick wall, because any time we produced someone and developed them, you would lose them. We had Matt Smith who got the goals against Liverpool in our FA Cup win, and Dean Furman who went on to captain South Africa too. We’d lose these players and be promised that the finances would be reinvested in the side, and they weren’t. That was hugely frustrating for everyone at the club.

During the two-and-a-half years at Doncaster, people won’t necessarily realise this, but we had two potential takeovers which fell through just before the season started. We couldn’t sign anyone because the takeovers were about to happen, and then I’d be working to three different budgets, so it was challenging to say the least. When I consider all of that, I felt as if I did a good job. Producing players, bringing youngsters through, being on the grass coaching and the buzz of a matchday is something I will always miss, but working in the media and being a global ambassador for Manchester City are roles I am very proud of. The Manchester City role has taken me to countries I could have only dreamed of visiting; from Mumbai to Bangalore, to New York, to Melbourne, to Houston, to Jakarta, the list goes on. Representing the club and the group at major events is a fantastic privilege, alongside the media work, I enjoy talking about City, but also Leicester and other clubs I played for. I suppose you could say there’s a great deal more longevity in this work than in football management, but if a project came up that interested me, I’d have to consider it.

Paul Dickov gave nothing less than everything as a player, enjoying a successful career littered with outstanding moments; from a UEFA Cup Winners’ Cup with Arsenal in 1994, to that play-off equaliser at the old Wembley for Manchester City in 1999 and a brace of promotions with Leicester City, he was as hard-working and as prepared as they came.

That meticulous approach still applies as he researches before a media appearance, in his role as a knowledgeable and versatile pundit, and as a global ambassador for Manchester City, a club he will forever be intrinsically linked.

Dickov’s passion for the game, and his love of coaching and developing players, is something that will always be there, and given that elusive winning mentality he has nurtured over nearly three decades in the game, there may yet be the chance to get back in the dugout once more.

Image: IMAGO / Hindustan Times – Paul Dickov addresses Manchester City fans in Pune, India, as a part of their Centurions tour, for amassing a record-breaking 100 points in the league 2017/18 season.