The Foundations of a Success Story 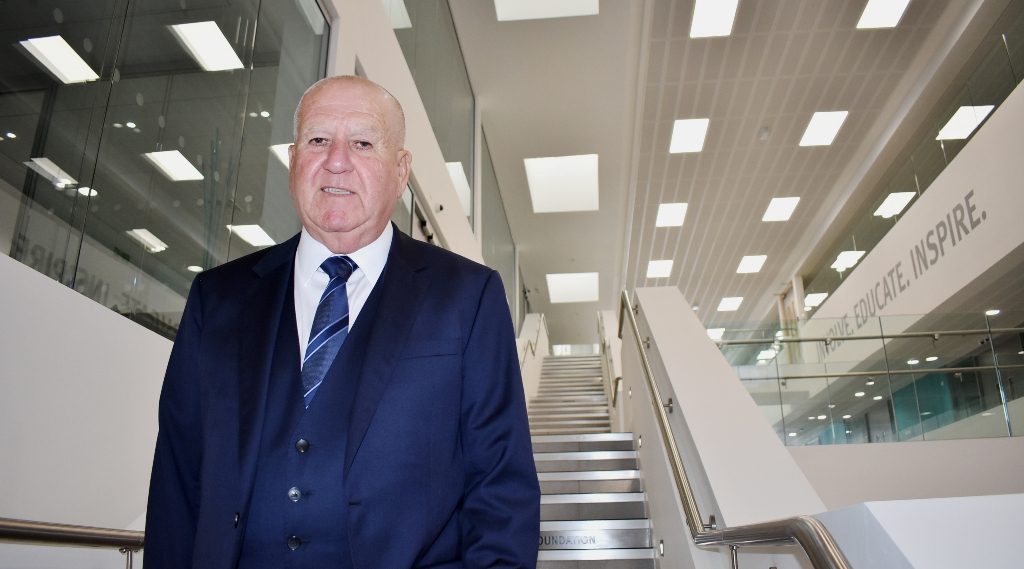 Football As A Force For Good / Presented By Geoff Wilson Consultancy

Sir Bob’s lasting legacy of hope for his homeland.

For a lad who left school at 15 with no more than a dead end job in the local steelworks as a prospect Bob Murray has done pretty well for himself – and for many people in Sunderland and the surrounding area as well for that matter.

Now, 60 years later, he’s SIR Bob Murray CBE, who cherished a seemingly impossible dream at the time, and is still living a dream now. Only this one doesn’t look so impossible.

When bosses at those steelworks near his home in Consett, County Durham, told him he would have to wait at least a year – living with hardly a penny to his name at his parents modest council house – before they could even consider offering him any employment, Bob the boy didn’t need any qualifications to realise he had to do something; and quickly.

That something was education at the local college where he learned the lessons of life, and accountancy in particular. Those lessons, and the value of education, have stood him and many others in good stead ever since.

Fast forward six decades – during which he built and sold a successful kitchen company as well as getting his knighthood from the Queen – and you’ll see a shining example of what ordinary people can achieve in life if they are given the help and opportunities. A real Beacon Of Light you could say.

The Murray story might not exactly be one about rags to riches, but it does tell a tale of a local boy who made good. Very good.

You won’t find too many youngsters, especially in the North East, who leave school with little but a slim hope to cling onto but then go on to own and sell a football club the size of Sunderland, build a magnificent new home called the Stadium Of Light for them to play in, and launch a Sunderland AFC Foundation that has grown to become one of the most pioneering sports charities in the world, built on four main pillars. 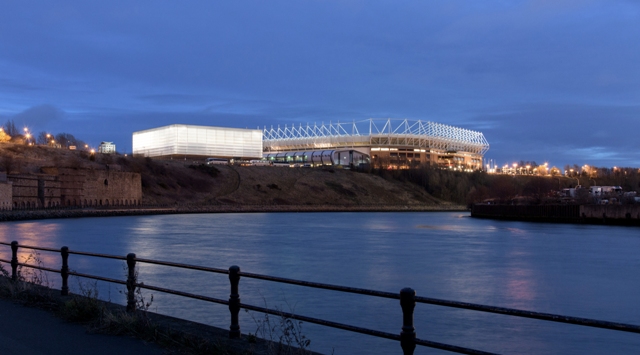 Pillar 1 is based on sport and play. Pillar 2 concentrates on education. Pillar 3 is all about employment and skills; and Pillar 4 is designed to help with health and well being

Success invariably requires someone and something special to be its main ingredients, and without wishing to make Sir Bob blush he was that someone special in this particular success story. Helped, of course, by major support and funding from business giants like Nissan, Arriva, Caterpillar, Barclays and Tesco banks, Barrett Homes, Livin, Karbon Homes, Springboard, as well as the Football Association and the Premier League.

It’s fair to say that the sort of future Sir Bob dreamed of ON the pitch has eluded him so far as his beloved Sunderland now languish in League One while bitter rivals at Newcastle dream of world domination under their new Saudi owners.

OFF the pitch it is a very different story. And as Sunderland’s Foundation of Light charity celebrates its 20th anniversary this month the words Sir Bob launched it with back in 2001 continue to come true.

At the time he said his aim was to inspire people to change their lives for the better through education and sport. Twenty years later the dream is being realised with the help of professional teachers, health workers, coaches, family learning officers, youth workers and support staff based at offices and classrooms within the Beacon of Light and outreach centres throughout Sunderland, South Tyneside and County Durham.

Sir Bob is the first to recognise that they could never have achieved what they have without the brand that is Sunderland AFC and what that team and club means to the community. As he says: “Even the NHS recognise that people are more likely to seek help from the football club than primary care places like hospitals.”

And so they have; more than half a million aged between 2 and 80 over the last 20 years, seeking help of all sorts from the ‘house’ that Bob built, so to speak. Help that starts with play groups and carries on through the ages with guidance on employment and skills for those who have become unemployed for whatever reason. There is also an amazing free school which helps youngsters who have fallen by the wayside in mainstream education – some of whom have been expelled from other schools – to get the sorts of qualifications that will help them get jobs.

And that’s just a little bit of the story in which the common denominator is Sunderland AFC. Experience has shown that people turn to the football club for help because it is an organisation that almost everyone in the city has an affinity with, even if the game itself isn’t necessarily their cup of tea.

As a result the Foundation, which costs around £4m to run every year, is able to engage with communities that wouldn’t necessarily welcome the intervention of other ‘traditional’ social services. Also, anyone can walk into the Beacon building and help will almost certainly be on hand from staff and volunteers who now dedicate their lives to helping others.

So far that help has included support for 1,500 socially isolated people with care packages and weekly phone calls. Staff  have voluntarily worked 250 hours at food banks which collected and distributed 6 tons of food last year alone. And when Sunderland won the Papa John’s Trophy at Wembley last March a total of £212,000 was raised for The Foundation selling ‘virtual’ tickets. Another £100,000 was also raised last month at a grand ball in The Beacon building to celebrate the Foundation’s 20th anniversary.

Along with Sir Bob, HRH the Countess of Wessex was the guest of honour at an event which showcased two decades of wide ranging service and which served to illustrate what their unstinting support, along with the power of football, can achieve.

Credit for much of that has been given to the Foundation’s CEO, Lesley Spuhler, who was awarded an OBE for her efforts and who, according to Sir Bob, “has changed a lot of lives for the better.”

The lives, for instance, of hundreds of Armed Forces veterans whose mental health has taken a hit during stressful service for their country. It’s a fact that 20 per cent of Armed Forces recruitment comes from the North East, and those ‘veterans’  who face personal crises when they try to return to ‘normal’ lives at home have a special complex in the Beacon building to help them.

Another statistic reveals a strong working relationship between The Foundation and The Salvation Army, working together with food banks to help alleviate food poverty and hunger.

Meanwhile Sir Bob is now based in Jersey, but his heart will forever be with Sunderland – and in the garden of a home he still has in North Yorkshire where he transplanted a third of the pitch from the club’s old home at Roker Park. “It’s still there today,” he says. 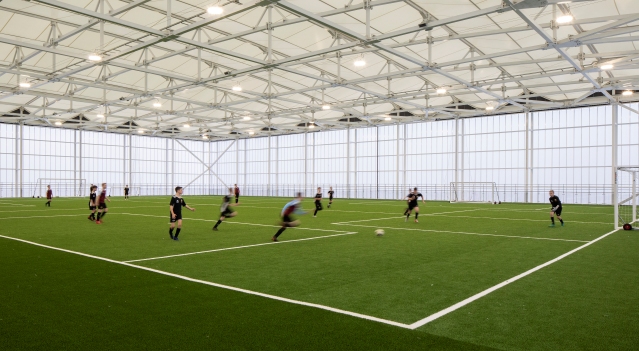 His love affair with Sunderland Association Football Club, and of course his Beacon Of Light, means the Murray success story will continue long after he’s gone to another Heaven. So on this particular occasion it’s appropriate that he delivers the final words.

“I’ve gone from being an unemployed Geordie lad with no benefits for a year to what I’ve got and where I am now,” he says. “And education did that for me.

“I didn’t know what I was going to do in the steelworks, but that was where I was going. But when they told me to come back the next summer I looked at my parents and thought I’ve got to do something about this.

“Now, all these years later, I’ve helped provide something that changes the lives of people of all ages for the better.

“We have a new wave of serious issues now. Children are suffering enormously through Covid and many people here are deprived and suffer more than normal in this region.

“They’re not sitting by the Thames looking over the river; they’re locked in huge apartment blocks. We have to help these people.”

No one can accuse Sir Bob Murray of not doing that.

It’s the heart-warming success story that has gone from strength to strength – and with Royal approval. This is how it unfolded:

Foundation founded by Sir Bob and is granted charitable status.

Family Learning Through Football is launched to bring parents and children together through education.

Kickstart buses launched in the community, heralding beginning of work with teenagers.

HRH Countess of Wessex GCVO opens the Centre of Light at the Stadium of Light.

Pitstop education programme is launched, working with ‘at risk’ youngsters.

Winners: Kicks Club of the Year.

Winners: High Sheriff Award for Great and Valuable Services to the Community.

Launch of Little Dribblers programme working with children as young as two.

High Sheriff Award for Great and Valuable Services to the Community.

Learn Where You Are Award for Family Learning.

Planning application for Beacon Of Light.

Employability programme Back in the Game wins National Project of the Year at NIACE Adult Learners’ Week.

Beacon of Light opens within the Stadium of Light and construction to start on the £20m building is approved.

Sir Bob joins pupils from Southwick Primary School to bury a time capsule at the Beacon of Light site.

Foundation of Light’s Ministry of Food Family Learning programme is given the royal seal of approval at Festival of Learning’s 25th Anniversary.

Winners: ‘Education/Training Organisations up to 150 staff’ category at the North East Equality Awards.

The Beacon Of Light opens its doors to the public.

Foundation of Light hosts a Beacon of Light fundraising dinner at Buckingham Palace attended by the charity’s Royal Patron, Her Royal Highness The Countess of Wessex.

Tanni Grey-Thompson, one of the country’s most successful ever Paralympians and a leading campaigner for the development of sport in the UK, joins the Foundation’s Board of Trustees.

Foundation of Light receives The Equality Standard ‘Gold’ Award for commitment to equality and diversity.

Foundation of Light’s educational centre in the heart of a Chester-le-Street estate gets new look thanks to Karbon Homes.

The Countess of Wessex, officially opens the Beacon of Light.

The Beacon of Light wins Project of the Year and Community Benefit awards at the 2019 RICS Awards.

The Foundation and Beacon of Light described as “highly impressive” by the DCMS Select Committee in its report into Changing Lives: the social impact of participation in culture and sport.

Find out more about the Foundation of Light: www.foundationoflight.co.uk