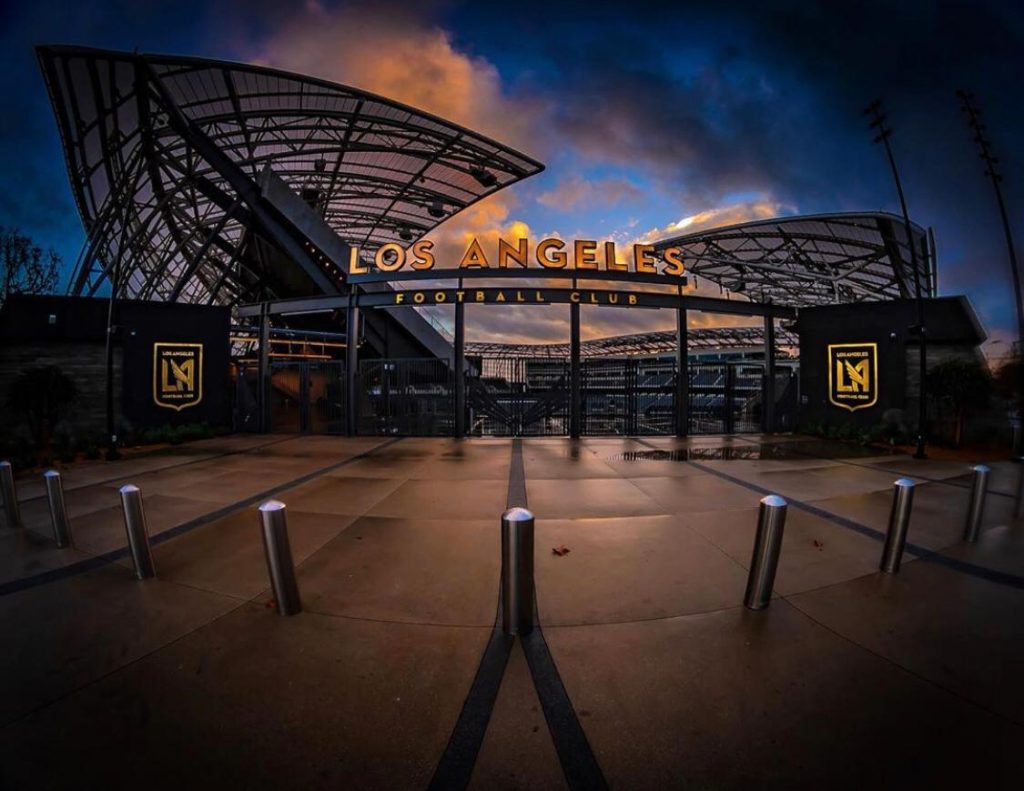 Chief Technology Officer, Christian Lau explains how Los Angeles FC’s forward thinking technology innovations at the Banc of California Stadium has seen them create an touch free environment that will be essential for watching live sport in the post-covid world.

FC: Our chat was to be about the digital and technology implementations at the Banc of California Stadium. However, with the subsequent postponement of the MLS after just two matches and the future of live sport being played in front of fans looking distant I’m interested to know how these innovations will work to your favour as we go forward in a post-Covid world?

CL: The reality for us is a lot of the technology that we’re introducing this season we were already working on before the pandemic but it just happens to align with the whole post-pandemic guest experience strategy – but it wasn’t planned that way.

We were already working through a number of initiatives this season to get ready for 2021 when we were going to completely re-imagine our concession stands, focus on mobile ordering and all those things that now align perfectly in response to the pandemic and that has been an interesting development.

There are a number of things we’re working on such as crowd intelligence. This is something we’ve been really keen to pursue, primarily because we wanted to eliminate friction where we can in the stadium. The idea behind it was a crowd intelligence platform that’s got multiple tenants in it.

Armoured Things are someone we’ve signed up recently. We want to understand the volumes of people that exist in our spaces, whether that’s on the concourse or in the rest rooms and other public areas. Understanding these volumes help us to eliminate massive crowds and long lines, which was more for operational efficiency but will now help with physical distancing measures in response to the pandemic. We’ve been working on that since December last year.

In addition we’re looking at a number of big areas specific to our traditional day to day operations – concessions and merchandise sales for example. In the past you usually waited in line to order food and beer and other things, now it’s all, for the most part, mobile. We have multiple versions of that such as Apple Business Chat which is AI (Artificial Intelligence) driven that you can interface with through imessage on your phone.

We’ve also got a web-based version of mobile ordering so you don’t have to download our app to order. That’s really helpful and convenient and eliminates friction. And then we have our in-app mobile ordering experience but they’re all basically the same with the same menus but we give people options.

Now we’re finalising what the concessions stands will look like physically, because we will have the mobile ordering queue. We’re going to put a time stamp on those orders so we don’t have a back up. In addition, we were already heavily focused on contactless payments and that will continue as we focus on creating a touch free customer journey.

Coming into the stadium, we’re installing new access controls via our partner Axess Control based out of Austria. We’ll be adding a thermal scanner to check people’s temperature along with mask detection. So upon arrival visitors will have their tickets scanned, temperature checked and checked if they have a mask on before the turnstile opens up but that will be a very short lived innovation, we think by about 12-24 months and then we can re-purpose those cameras.

We were working to add the Clear identity platform to our access control systems which provides facial recognition ticketing. We had two matches this season before we had to shut down in response to the pandemic. The facial recognition technology has been really well received. We want to normalise that with our fans so we’re adding that component to our turnstiles directly. That’s stuff we’ve been working on for two years so it’s not like it’s new, it just happens to work really well within the confines of our new guest experience. We want people to be comfortable. 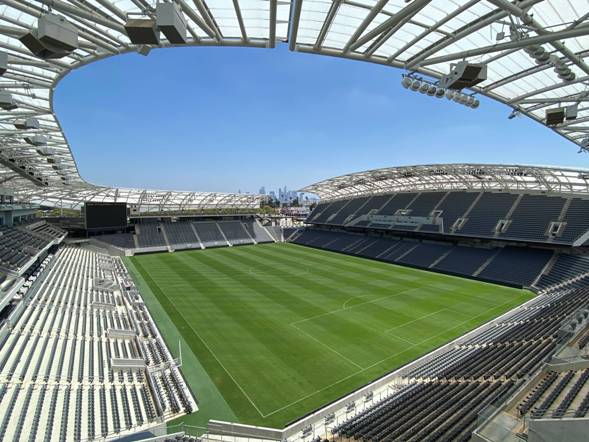 All of these innovations are going to crucial in attracting as many people as you can within the restrictions in place and are going to be required going forward to help bring fans back safely into the stadium environment. It’s almost as if you have pre-empted this.

It’s interesting for us because our stadium has 22,000 seats, 18,500 of which are season tickets, so from the perspective of bringing our fans back into the building we’re not really that concerned because we know that if we could open up tomorrow they’d all show up.

But we don’t know when we’ll be able to open the venue back up and then we don’t know if we can have 100% of our audience. We’ve done all the modelling to understand that even if we had a proportion of our audience we would have a lot of challenges in the fact that we’d still have to have the same operation rate – so the same number of staff on site to be open. It will be interesting to see how that plays out because you end up losing a lot of money in those situations.

As a football club can you monitor human behaviour and use it to your advantage – understanding how people behave around the stadium environment when they can return?

We’ll have to see how it plays out. Requiring masks and taking temperatures and potentially other remediation measures will be in place and can help. Ultimately LA County health dictates what venues like ours have to do, so they may have testing in the future but we don’t know yet. Overall our fans are very dynamic; it’s like a big family. When you think about how people act overall I think it will be fine.

We’ve never stopped communicating with our fans and our level of engagement has been very high during the shutdown via social media and digital/virtual experiences. When required, we have communicated with our season ticket members to help them understand where things are at. We have a new campaign coming called Embrace the Space which is a whole document around the new stadium experience which we’re going to start promoting. But we didn’t want to do it too early because if we started promoting two months ago it wouldn’t be relevant to anybody because we’re not opening the stadium and we likely won’t have any fans in until 2021 at this point.

Slowly but surely we’ll start to tease with things but what you’ll find is the customer doesn’t really care a whole lot about what we just talked about. Facial recognition ticketing is cool for the user but it’s not something that they’re thinking about. And mobile ordering at a concession stand is not something that they can’t wait to get back into the stadium for; it’s just something that will take place. I always have to temp my enthusiasm because I know just because we’re delivering it doesn’t necessarily mean that people are generally excited about it. It just becomes routine. And that’s kind of what we want. We don’t want anything to be in front of the customer that makes their head explode, it just needs to be very subtle introductions to the technology.

How do you think your fans will adapt to these technology changes?

The key to its success is to not force it on anyone. You can opt-in to it or not, we’ll get you in the building one way or another and it’s going to be a digital experience regardless. And I think that’s the key to it. When you think about bio-metrics in general, our demographic is pretty young – about 65% of our customers are between 18 and 34 years old. Then when you go from 18 to 44 it becomes 75% which gives us a really young demographic. They’ve grown up with social media, they’ve got their entire lives on Instagram, on Twitter, or somewhere so they don’t have the concerns that an older demographic will have around bio-metrics.

Was the demographic profile of the club’s fans one of the key drivers for having these innovations as part of the stadium experience?

When we opened the stadium back in April 2018, and when we were building up the technology, we knew what the demographic was going to look like because we had focused on that research since 2014. We had a really good idea of what their expectations were going to be. If you look at our wifi network, for example, it’s been over-engineered because we needed to have what has turned out to be the benchmark in the industry for wifi activity. We built a network for 22,000 people that could service 72,000 easily, so our upload/download speeds are ridiculous for all of our customers.

However, the true test for our network was not in soccer, it was an Ariana Grande concert in 2018. We were monitoring the network and when she came on stage we had almost 17,000 simultaneous live streams over Facebook and Instagram, but the utilisation of the network, even at that high point, was only 15%, so were really happy with that.

Now we’re starting to look at our next generation. Everything is fibre right now, connected to a PON (passive optical network) and now we’re working on the next generation – wifi 6. We’re going to start that probably early to mid 2021, and have the next generation up and running in 2022. We’re bringing on 5G with Verizon at some point later this year or next. Then of course T-mobile and AT&T will follow. Connectivity is key. With the connectivity demands of today’s customer and a fanbase reliant on social media it’s a complete failure not to have proper internet access.

On a matchday what level of utilisation do you typically get for the network?

On any given match it’s about 44% utilisation of the wifi network and everybody else is on the DAS. The DAS is really strong. People just show up and they don’t even think about wifi because the connectivity on their phone is pretty strong, which is good. We don’t have any portal, there’s no data that you can give us from the customer connecting to our network that’s worthwhile. An email address – which is generally fake – is totally useless so we don’t do that, you just come and connect to the network and that’s where you achieve 44% utilisation. If we didn’t have the DAS we’d have 100%. Luckily we have the two and they offset each other.

And finally, what are the main technology points that will take LAFC forward?

There’s a lot of back of house things that we’re working through that use AR that fans will never see and are more to do with maintenance of the business management systems and other types of engineering solutions that they already use in aerospace for example. We’re pursuing a lot of things and being ambitious where we can.