AC Milan and FC Internazionale have today unveiled the shortlisted concept designs for the new Milano Stadium together with plans for an urban redevelopment project for the surrounding San Siro area.

“The Rings of Milano” by Manica/Sportium consists of two iconic rings, interlocked and set apart in perfect balance, symbolizing the story of how two clubs, forever in opposition, and now united in their cause to preserve one of Milano’s most storied traditions.

The stadium’s iconic linked rings accommodate both LED and architectural solutions for branding and team changeover between matches.

The new Stadium of Milano is carefully integrated into a broader masterplan development that will revitalize and transform San Siro into a park and entertainment district for the people of Milano to experience year-round, preserving the original pitch’s location and reimagining it as a gift to the community for all to enjoy. 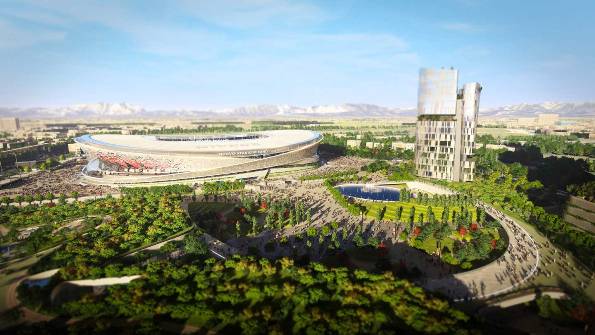 “The Cathedral” by Populous draws inspiration from two of Milano’s most iconic buildings; the Duomo and the Galleria. In fact, a sunlit galleria encircles the stadium enveloped by an elegant glass façade.

The Cathedral has been designed to create a unique home for the fans and supporters with bespoke installations. The stadium is designed to be the most sustainable in Europe: the galleria is naturally cooled and passively heated, photovoltaic panels line the stadium roof, and all rainwater is collected from the roof and reused. The stadium is surrounded by 22 acres of green space, which reduce water runoff. 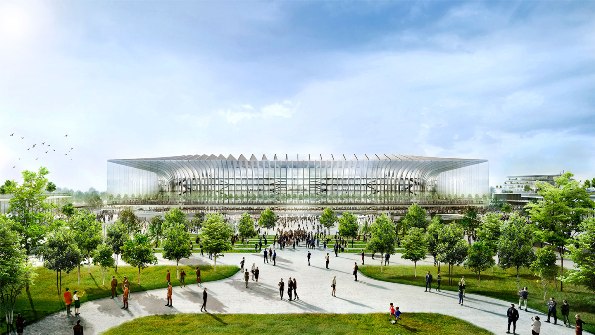 “The new stadium of San Siro,” stated Alessandro Antonello, Corporate CEO of FC Internazionale, “will be located in the heart of a highly modern, green and liveable area which will be accessible all year round.

“The project reflects the DNA, made of innovation and progress, which is historically embedded in our city, and the recent progress which has brought Milan back to being an avant-garde, attractive and international city.

“The Multifunctional District will be built to the highest standards of eco-sustainability in order to allow the San Siro district to once again re-establish itself as a destination of European and world excellence for sports and entertainment.”

Paolo Scaroni, Chairman of AC Milan, added: “AC Milan and FC Internazionale have shared a stadium in San Siro for more than 70 years. The Project’s strength is the two club’s commitment together for the new Milano stadium.

“It means increased investments and a common goal to give the City a sports and entertainment district which is alive all year round thanks to events involving both teams and creating jobs for more than 3,500 people.”

With today’s presentation the clubs intend to start, in parallel with the institutional process, a collaborative consultation with the City of Milan, families and fans alike: a survey will soon be launched on www.nuovostadiomilano.com.