When Aberdeen FC originally submitted plans to consolidate and renovate its stadium and training ground they committed to embark on a journey of modernisation and digitalisation.

Since then, the club has been through quite a transformation, embracing digital media technology to enhance the match day experience while creating a seamless communications platform for players and staff.

One of Scotland’s leading clubs with a proud history that spans over a century and nineteen major trophies Aberdeen has always recognised the importance of investment and leadership, whether that’s in the team, the stadium or in the community that supports it.

It was crucial for Aberdeen FC to move away from its existing, outdated analogue TV solution, and embrace a more feature-rich IPTV and digital signage platform where both its stadium and training ground content could be centrally managed.

David Bowman, IT Manager at Aberdeen FC commented on the endeavour, stating: “Simply, the main objective for Aberdeen FC was to improve experience by driving new technology, not only for our fans but also our players and staff on site.

“We were looking for a holistic, utility system approach that could serve as a communications tool at our training ground and an engagement platform at the stadium. We also wanted the potential to grow further if we needed it to; our existing system couldn’t offer us that.”

Ultimately the decision to work with Tripleplay was a strategic one, with David and his team not just looking at functionality on day one but focusing on the longer-term benefits of choosing an agile, software based and integration-rich platform.

“Many manufacturers that we investigated were hardware centric, something we wanted to avoid as we found it restrictive.” Bowman continued.

“Tripleplay being software-based was ideal and meant we weren’t tied down to legacy hardware. Tripleplay allowed us to futureproof our investment and the fact they were already well established in the sports market and understood our challenges gave us a lot of confidence.”

Aberdeen FC has used Tripleplay technology to unlock its venue. Integrated digital signage and IPTV in the new training ground provides players and staff with clear and engaging content, whilst also reinforcing club brand and ethos.

In the stadium, the solution helps drive revenue opportunity through digital advertising and engages the many fans and visitors who come to the Pittodrie Stadium. 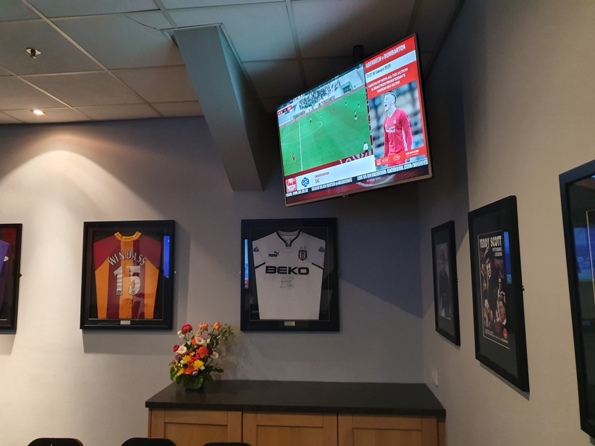 Tripleplay’s solution is built on HPE infrastructure hardware which already existed at the club, with the breadth of supported endpoint devices available meaning that there was a genuine flexibility when it came to deployment. Both LG webOS screens and set top boxes on site were leveraged to work with the Tripleplay platform.

Aberdeen FC has installed digital signage and IPTV screens across the stadium, in-bowl, throughout the concourse areas and in the hospitality and event spaces.

“Scrapping static boards and embracing digital displays is a game changer in a public venue like Aberdeen FC. We can work with local and national advertising partners and create a real return on investment through digital promotions,” added Bowman.

Furthermore, during matches Aberdeen FC can deliver a live feed of the match to concourse and public areas around the stadium.

Bowman said: “Integrating high quality IPTV streaming functionality is vital. We can deliver HD streams to concourse areas which helps encourage people to leave their seats during play to buy food and drink without the worry of missing any of the action.”

As the club hosts a lot of external corporate events, it was extremely important to be able to adapt and change the content on screen depending on who is using the facility. The team at Aberdeen FC can easily create layouts that include welcome messaging for guests, as well as scheduling relevant TV feeds to broadcast to specific screens, creating a unique and personalised experience.

Another challenge was managing both the stadium content alongside the content needed for the training ground. User profiles and permission structures were established in the Tripleplay CMS, with a granular user approach used to ensure that the right content ends up on the right screens. This was a key control the club needed to prevent private and internal content for players and staff ever being broadcast to public facing screens; offering peace of mind for the club.

Technology for now and in the future

Bowman stated: “In just over a year of working with Tripleplay we have already seen some great new features that we can utilise, such as social media integration, SKY Brightbox integration and intuitive theme change options.

“The platform has come on leaps and bounds and the fact Tripleplay has numerous clients in the sports market, in the UK and internationally, highlights how they really are the leader in their field.”

Aberdeen FC is already planning the next phase of its project with Tripleplay. The club is preparing to install digital screens in the club shop as well as utilising existing EPOS integration capabilities to create digital menu boards in the food and beverage kiosks in the stadium’s Richard Donald Stand.

“There were many factors which ultimately led to the Tripleplay solution being specified and why they are our go-to for digital media technology solutions. We had seen their solution in action at Brighton & Hove Albion a few years prior and were impressed with the technology, however, when we went to market a few years later, the solution had grown and developed extensively.

“This innovation and development was something I could get behind. I wasn’t just excited about what it could do for us now, but what the solution would do for us in the future as well,” he concluded.