Everton Football Club’s proposed designs for its iconic new stadium which would be built on semi-derelict dockland in North Liverpool and deliver a £1bn boost to the city’s economy have been revealed.

World-renowned architect Dan Meis revealed the images at an event for the club’s fans held in a former warehouse at the Titanic Hotel just yards from the proposed Bramley-Moore Dock site which is part of Peel L&P’s wider Liverpool Waters development.

The concepts show a brick, steel and glass design which takes its inspiration from the historic maritime and warehouse buildings nearby. The structure combines the historic and the modern, with the brick base of the stadium incorporating a subtle nod to Goodison Park’s famous Archibald Leitch lattice work while the dynamic roof structure made from steel and glass gives the stadium a modern finish. 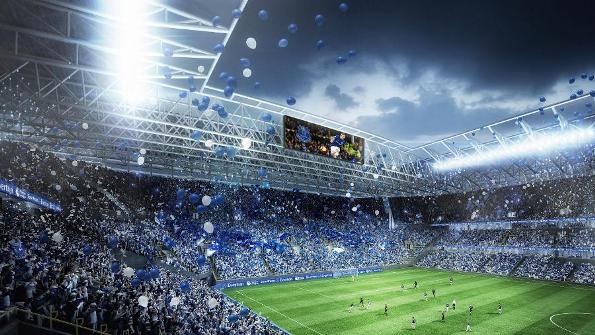 The stadium is made up of four distinctive stands including a large steep home stand to the south that will house 13,000 fans on matchdays.

The design of both North and South stand lower tiers will make it easy to adopt rail seating and, should legislation change in the future, they could also be converted into areas for safe standing offering supporters optionality and flexibility in the future.

The event was also used to reveal plans for the redevelopment of Goodison Park which includes a range of community assets such as homes, health, education and enterprise amenities as well as the introduction of public space which will include a lasting tribute to the club’s current home of 127 years.

The event marks the start of a month-long public consultation into the plans – which have been badged as The People’s Project – with the results of the consultation informing further refinements to the proposals.

Prof. Denise Barrett-Baxendale, Everton’s Chief Executive Officer, said: “Today marks an incredibly important milestone for us as we seek to build a new stadium which will act as a ‘game changer’ for the club and our city region.

“Our proposed stadium design takes its inspiration from both our city’s maritime history and from our club’s rich heritage and traditions. 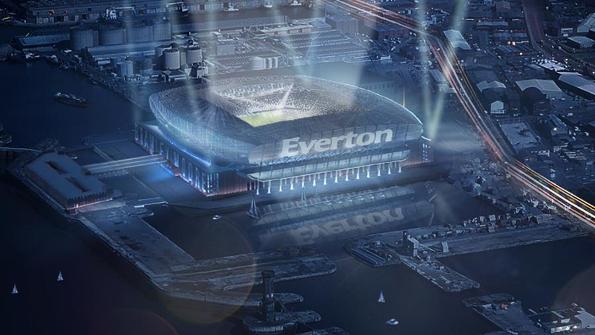 “It is, first and foremost, a stadium for football, for our passionate fans and for our players. A stadium that gives Everton Football Club a platform for growth both commercially and socially. But it is also a stadium for the entire city and a development which will deliver transformative benefits in terms of regeneration and inclusive growth for the whole Liverpool City Region and for North Liverpool in particular.

“Our plans for Goodison Park, although much more outlined at this stage, fulfil our promise to our neighbours in Liverpool 4 to work together to create something that will benefit the community for generations to come.

“There is still much work to be done to deliver both the stadium and the community-led legacy in Liverpool 4 but we remain on track to deliver these amazing transformational projects.

“I’d like to thank everyone who has supported us so far and especially would like to thank our fans, the residents and businesses around Goodison Park and the people of this city for listening to us, for sharing their ideas with us and for backing us on this journey.

“It is important that people continue to give us their views during this public consultation, so I would urge everyone to visit the exhibition as it tours the city region or go to the project website to take part.”

ABOUT THE STADIUM PLANS

The club’s proposals include extensive, high quality public spaces for use on both matchdays and non-matchdays, the creation of a waterway to connect the docks and a new multi-storey car park next to the river, with a footbridge linking it to the stadium. The car park would be low enough that it did not block views of the stadium from the river or views of the river from the stadium.

The stadium would be built on a north-south orientation. This is the best approach in terms of the impact of sunshine and shadow on the fans’ experience and on the televising of matches. It is also the best approach with regards to prevailing winds, retention of heritage assets and provision of public space around the stadium.

Everton is proposing a stadium capacity of 52,000 with the potential for that to rise to 62,000 in the future, subject to further planning permission.  The stadium will also be future-proofed for any changes in regulations in relation to safe standing. The design of two of the stands (north and south) will allow for rail seating and in future, should the law change, a safe standing solution.

The designers are proposing to build the stadium and the car park using traditional brick, glass and steel. The dominance of the brick is designed to ensure the development looks at home in the dockland setting and takes its inspiration from the brick used in the nearby Stanley Dock complex. The current proposals show a nod to Goodison Park’s Archibald Leitch architecture with a subtle reference to the stadium’s famous lattice work in the brick.

Inside the stadium, fans would be as close as five metres to the action with all stands offering unobstructed sightlines. The overall design will also help amplify the noise within the stadium ensuring the best possible atmosphere. The home stand would be the South Stand and would consist of a single steep tier of seats, with a super-riser to factor in any future changes in legislation to accommodate safe standing.

The Fan Plaza would be to the east of the stadium and would be about the same size as Liverpool’s Pier Head. It would be the focus for pre-and post-match entertainment and activity. Within the Fan Plaza, the top of the original dock wall could be revealed within the paving, maintaining the outline of the former dock.

Bramley-Moore Dock sits within Liverpool’s World Heritage site but is inaccessible to the public and sits next to a United Utilities waste water treatment plant. The club plans to breathe new life into the site, open it up for year-round public use and ensure the stadium becomes a destination both on matchdays and non-matchdays.

Preservation and restoration of a number of the dock’s key features are planned.

– Preserving the dock wall – innovative engineering would ensure the dock structure is protected, preserved and where appropriate exposed for visitors to understand the city’s dockland heritage. If the club were to ever move again in the distant future the stadium could be deconstructed and the returned into a dock.

– Hydraulic Tower – The grade II listed building is currently inaccessible and disrepair. The club plans to repair and restore the Hydraulic Tower and make it a visitor attraction.

– Retaining a water channel – The club plans to maintain a water channel between Bramley-Moore Dock and its neighbouring Sandon Half-Tide Dock and Nelson Dock. Connectivity forms part of the Outstanding Universal Value that was part of the dock’s World Heritage Site designation and although boats cannot navigate through any of the three docks the club has committed to maintain the channel and retain the Outstanding Universal Value.

ABOUT THE GOODISON PARK PLANS

The club’s proposals for Goodison Park are unique and have been designed in conjunction with local people to ensure a legacy for the area, with the proposed development of homes, health, education, community and enterprise facilities which will improve wellbeing and opportunity for local residents.

The proposed development would include significant landscaped areas, including trees, private garden space and public space. A large publicly accessible open space is proposed at the centre of the masterplan, where the Goodison Park pitch currently sits, as a lasting reminder of the club’s footballing legacy.

A mix of housing (up to 48) and apartments (up to 160) could be developed to create a choice in housing size, type and tenure. This could include new family housing developed under a scheme that would explore new ways to make them available to local residents.

The creation of facilities to encourage business start-ups could be provided at the site. This could support young people in particular or focus on a specific sector, for example within the creative and digital industries.

The masterplan proposes the development of an education facility which could accommodate the expansion of the Everton Free School or could provide a new facility for children or adults, with the potential to also build a new children’s centre for community use.

A multi-purpose centre could be delivered to address health and wellbeing issues for people of all ages to access advice, care and support. The club is currently engaging with the NHS to understand the nature of the need.

Everton is proposing the creation of small-scale community-led retail, food and beverage and leisure facilities, which complement the area’s existing offer and meet the needs of the community.

Current proposals include approximately 4,000 sq m of office floorspace. It is anticipated that some of this would be occupied by the club’s award winning official charity Everton in the Community.

The Club is considering the retention of key features of the public art such as the Dixie Dean statue and the new Holy Trinity statue to ensure Everton’s historic role in the community is celebrated and to continue to attract visitors to the site.

ABOUT THE PUBLIC CONSULTATION

The plans for Everton’s new waterfront stadium and proposals for the redevelopment of Goodison Park will be shown across Liverpool City Region as part of the club’s second wide scale consultation with the public.

The People’s Project public consultation takes place from Friday 26 July to Sunday 26 August and will also involve a Virtual Reality interactive exhibition, visiting 12 locations across all six city region boroughs until 18 August. The consultation is available online until 25 August.

More than 20,000 people took part in that consultation, with the overwhelming majority backing the proposed move to Bramley-Moore Dock, part of Peel L&P’s Liverpool Waters site, and the redevelopment of Goodison Park.

Both the People’s Project App and the campaign website will carry all the information on the consultation programme as it is finalised and will be updated through the month of consultation and the lifetime of project.

The consultation will ask members of the public for their views on a range of issues in relation to both Bramley-Moore Dock and the Club’s intention to leave a legacy at Goodison Park.

The consultation is an essential part of the planning application process and it follows previous engagement by the Club with its fans, Goodison residents and senior business, cultural and public sector figures in the Liverpool City Region.