Football continues to be a huge draw for fans of sport with 66.7% of total attendances dominated by the game with live UK sports events set to reach over 74m attendees by the end of 2018. 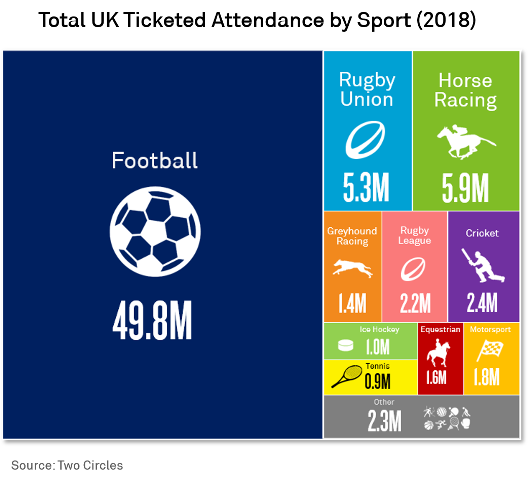 In 2012, when the UK entered the current period of major-event hosting with the London Olympic and Paralympic Games, the total attendance for regular annual live sports events (not including the Games) was 63m. This means UK sports attendances have grown 2.8% year-on-year on average between 2012 and 2018 not including one-off annual events – representing 11.5m more attendances in 2018 than in 2012.

Buoyed by differentiated propositions and products, more young people are coming to watch sport: the proportion of ticket-buyers aged 16-24 has increased from 15% in 2012 to 23% in 2018.

The number of Millennials**** attending sport has also increased across the period – growing from 16% of the total number of UK sports ticket-buyers in 2012 to 21% in 2018.

Speaking of the figures, Two Circles CEO Gareth Balch, said: “Sport has always been a popular leisure choice due to our cognitive bias for unscripted human drama. However, across this Golden Decade, the quality of experience has improved with sports rights-holders increasingly investing in the stadia, the stars, and the service.

“And so despite a huge increase in the amount of available media, sport continues to cut through like nothing else. In a world of smartphones, on-demand TV and short attention spans, it remains one of the few sources of ‘Instagrammable’ entertainment that we can experience with friends, family, or on our own.

“The sports rights-holders prospering most are those who have understood what their audiences – and increasingly younger audiences – want from a live experience, adapting their product where required to ensure fans return, or creating new events to grow their fanbase.”

Demand for live sports experiences is insulated and will continue to grow: Two Circles’ modelling tools, powered by machine-learning, show that attendances will exceed 77m in 2019 and continue to grow into the next decade.

Figure 1: Total Ticketed Attendance for Live Sport in the UK

Figure 2: Total Ticketed Attendance for Live Sport in the UK by Sport (2018)

*Only paid ticketed events for professional sports events held in England, Scotland, Wales and Northern Ireland are considered. Attendance figures used are those declared by the hosting rights-holder, which include the number of tickets sold and other relevant attendees granted access to the venue

****As per the Pew Research Center definition, Millennials are classed as those born between 1981 and 1996.