Fashion in football has often been a source of derision. Those of us who saw Liverpool’s ‘white suits’ in the 1996 FA Cup final or David Beckham’s ‘sarong’ in 1998 bore witness to this. So often is it bad you’d be forgiven for thinking the fashion world is somehow making a deliberate attempt to undermine its own industry as well as that of football.

But these are extreme cases and more often or not today’s footballers are dressed as sharp as the Hollywood glitterati – with the exception of Messi’s elaborate Ballon D’or ceremony collection.  Footballers are hot property, however, and the attention to what they wear off the pitch is analysed in as much detail as their on-the-pitch displays.

The relationship between football and fashion hit heady heights with George Best and Mike Summerbee’s boutique in the centre of Manchester, opened in the 1960s. Fast forward to mor modern times and Freddie Ljungberg’s designer pants, people have followed the trends set by the stars of the football pitch.

It’s been a long and winding road in the realm of fashion. In 1928, an argument between former Manchester City winger, Ernie Goodwin and a hardy coalminer called Walter Smith led to the formation of Goodwin Smith, the luxury menswear brand whose focus on quality and style makes them the leaders in men’s footwear. And their links to football continue to this day.

“Goodwin Smith’s connections to football go all the way back to 1928, when then brand was founded by co-founder and former Manchester City right-winger, Ernie Goodwin,” said Jack Dyson, Brand & Marketing Manager at Goodwin Smith.

“Fast forward to today and our links to the sport are just as strong. Over the last few seasons we’ve collaborated with a whole host of football clubs including Huddersfield Town. We reach out not only to clubs across the English football leagues but also to overseas clubs. It really resonates with our customers and allows the clubs great coverage in a competitive retail landscape.”

The growing popularity and the global awareness of football’s top stars only serves to magnify this and the explosion of social media means more and more people are able to peek into the lives of this group beyond the pitch.

The social followings of some of football’s top stars reaches tens of millions alone and the boom of image sharing platforms such as Instagram with over 1 billion users means footballers and their fashion are more visible, and influential, than ever before.

Indeed Cristiano Ronaldo commands over 140m followers on his official Instagram page alone whilst David Beckham, despite his 1998 fashion faux pas, captures the attention of over 50m followers. Beckham is now seen as the optimum of style, an icon with a celebrity wife who, coincidentally, has made a name for herself as a fashion designer.

It could be argued that Beckham’s equivalent these days is Paul Pogba, the France World Cup winner and Manchester United playmaker, who, to the frustration of his club manager, Jose Mourinho, seems to spend most of his time in the salon working on his latest hairstyle than on the training pitch practising his already silky ball skills.

However, Beckham has served his time on the pitch and when steps out in public these days, he doesn’t get it wrong; the former footballer now cuts a suave figure as a club owner with his newly launched MLS expansion franchise Club Internatcional de Futbol Miami.

And this highlights another marked change in football and it’s all consuming growth. Club owners and executives are just as much in the public gaze as the players and what happens in the boardroom is everyone’s business. Sharp suits and big watches are the norm but let’s not forget that football is all about the feet.

At the sharp end of football, image is everything, and a reason why many in the game spend fortunes protecting it. Fashions come and go, but quality is earned and that is why fcbusiness has partnered with Goodwin Smith. We share their passion for style and quality and we share their ethos of setting the agenda and being a leader in our field. 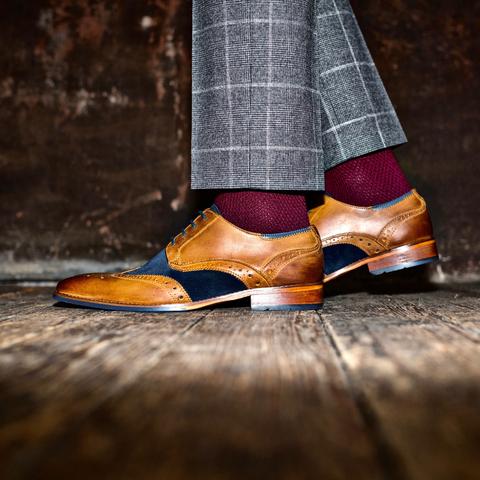 Based in Rossendale, Lancashire, every Goodwin Smith shoe maintains the highest standard in footwear construction, because the two founding partners, despite their differences hatched a plan to create superior footwear. And, four generations on, that ethos is honoured and upheld.

Our partnership is built on solid foundations of hard work, true northern grit and a shared goal of bringing the very best to the world of football. Like our motto suggests…football is no ordinary business!

To celebrate this partnership we are giving one lucky reader the chance of winning a £300 gift card to spend at www.goodwinsmith.co.uk.

To be in with a chance just send us a picture of you in your current footwear in or around your club stadium to @goodwinsmithuk & @fcbusinessmag on Instagram with the #FootballFootwear and we will choose a winner.

Based in Rossendale, England, Goodwin Smith is a fresh, unique and luxury menswear brand offered at highly competitive (we say “charming”) prices.

By selling our footwear almost exclusively online Goodwin Smith saves its customers an average of over £100. One can compare the quality of Goodwin Smith shoes to £220+ shoes found in famous high street stores.

The Goodwin Smith raison d’etre is to offer our customers high quality at a lower price.

The origins of Goodwin Smith date back to an argument between two shoemakers, Ernest Goodwin and Walter Smith, in a Lancashire pub in 1928. Each was convinced he could make the best shoes. Ultimately, the men joined forces to form one company.

Today Goodwin Smith shoes are worn all over the world by high-profile celebrities and sportsmen who often post images of themselves wearing their Goodwin Smith footwear proudly on their social media channels.

The Goodwin Smith brand has a unique tone of voice that mixes British charm and whit with style and sophistication.

Goodwin Smith now has over 1 million combined social media followers/customers and has created a cultural movement with them – we call this our ‘GS CLUB’.

The Goodwin Smith targeted demographic is principally 25 to 45 year-old male professionals that want to look good and value quality.

The latest Goodwin Smith range has been developed by John Kirk, Product Development Director, who has a vast experience in footwear design and technology and has been with the company for nearly 30 years.

We are passionate about producing quality menswear and developing Goodwin Smith into a unique and successful brand.

Please visit our website and official social media channels to learn more about the brand and what we represent. www.GoodwinSmith.com