It’s the epilogue absolutely nobody asked for. Dive into the numbers behind Footy.com’s Top 100 Shirts countdown, as we find out what makes a shirt popular.

What makes the perfect football shirt?

It’s such a subjective subject, there’s probably no definitive answer to that question. Every single one of us is drawn to different designs, forging our own opinions on a specific colour, pattern or template. In all honesty, it’s these differences in opinion which make talking (and arguing) about shirts so much fun.

Of course, it just wasn’t possible for us to rank the Top 100 Shirts of 2020 without gauging some of these opinions. So, we brought together a panel of shirt experts and collectors to tell us their favourite designs of the year, coming up with a list bursting with all kinds of different flavours. It’s one of the most diverse menus you’ll ever see.

You probably already know that Bristol City’s outstanding goalkeeper shirt came out on top, just pipping the likes of Red Star FC, Inter Milan and Nigeria. But now we wanted to look into what makes these shirts so popular and, above all, finally crown our official  Brand of the Year.

Home vs Away Shirts

Right, the first thing we wanted to do was answer a very simple question – do people prefer home, away or third shirts? Or, at the very least, did our panel of shirt connoisseurs, obsessives and geeks (I’m running out of things to call them) have a particular preference.

The short answer is a resounding, earth-shattering “no, not really”, finished off with a fairly bemused shrug of the shoulders. Get ready, internet, you’re about to be broken once and for all. 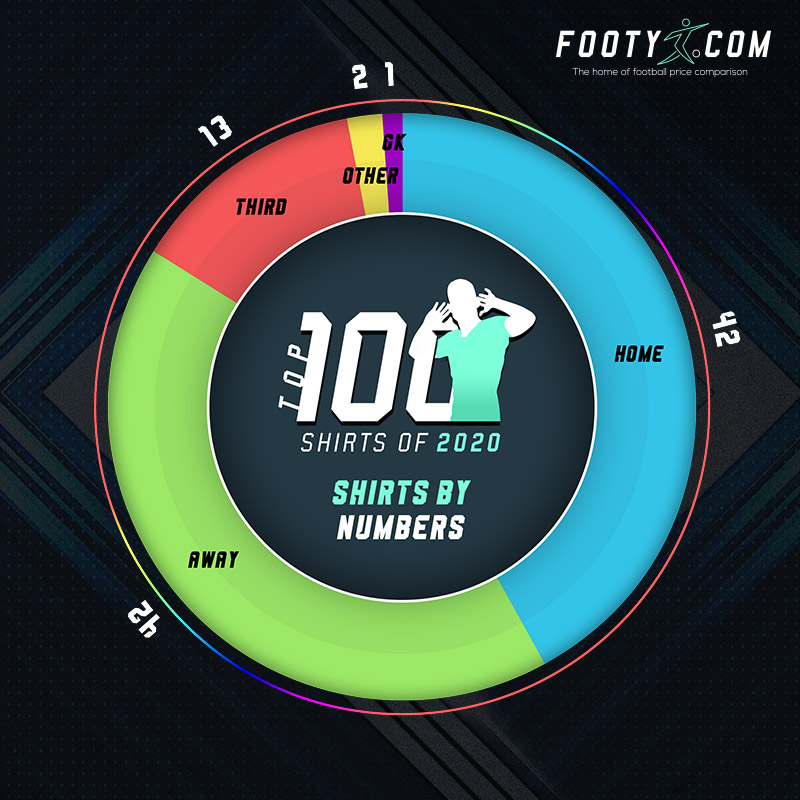 In fact, we’ve been completely robbed of any headline whatsoever, because our Top 100 list features exactly the same number of home and away shirts. There’s 42 of each, a number which won’t seem entirely coincidental to any other fans of The Hitchhiker’s Guide to the Galaxy out there. Anyone?

Fortunately, our fancy pie chart isn’t completely wasted, because it’s at least confirmed that the hype around third kits has died down a bit this year. This might be because the designs aren’t quite as good (looking at you, United), but it also points towards a growing number of clubs simply coming up with much better home shirts.

Thanks to some absolute gems in the lower leagues, it definitely feels like more clubs are trying to invest in bespoke – not to mention beautiful – kits right now. This is, of course, pretty disastrous news for our bank accounts, but it’s also a big reason why there are more home shirts compared to last year. I tip my hat to the designers.

Studies in the past have shown that teams playing in red tend to win more matches, but that doesn’t mean to say they have the best shirts. We’ve separated our Top 100 list by colour, and fans of “red” clubs will be disappointed to see they’ve been soundly beaten by their neighbours in blue. 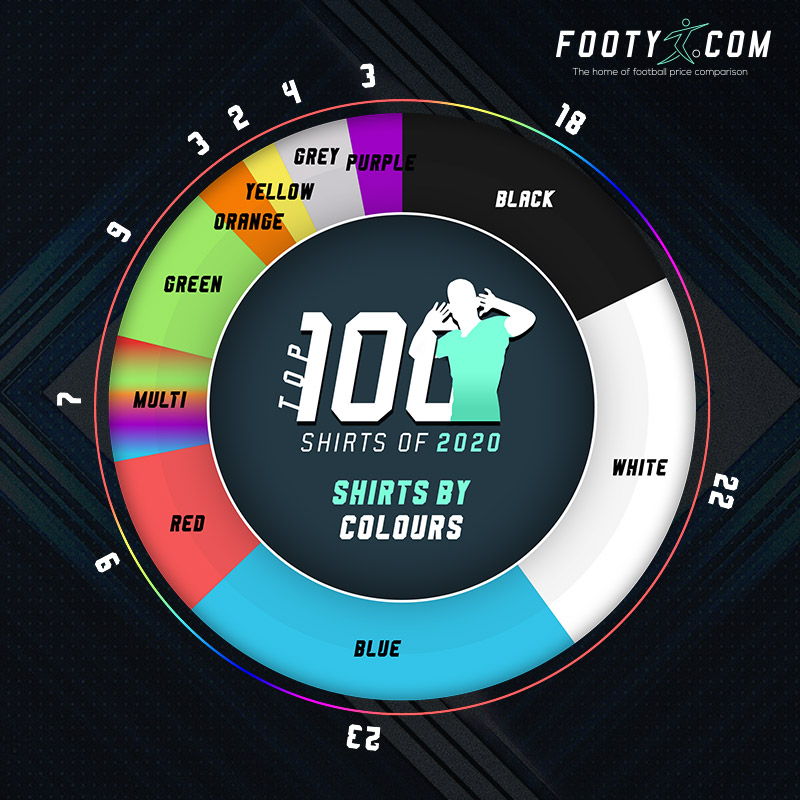 Yeah, I guess you could say the city is quite clearly blue right now. They haven’t just beaten their red rivals, however, because blue football shirts have actually proven more popular than any other colour this year. Sorry, white and black, you’ll have to make do with our silver and bronze medals this time around.

Southend United’s away shirt was the only blue kit to feature in the top 10, but there were 22 other stunners to be found further down the list. At the other end of the scale, only a handful of yellow or orange shirts made the list, while 7 (including our number one shirt) were classed as being multi-coloured.

Personally, I love an obscure shirt from a club I’ve never heard of before, but then I’m also drawn to the classic appearance of some European giants. This had us scratching our heads, as we pondered whether shirts from a certain country or league are typically more popular than others.

The beauty of Top 100 Shirts is that it brings shirts together from all over the world, starting them on a level playing field and then pitting them against each other. Like I said earlier, our list is a pretty impressive continental menu, and there were shirts from 16 different countries in total.

But which country produces the best shirts overall?

Just like last year, shirts from English clubs are typically more popular than anywhere else. Of course, FOOTY.COM is a UK company, so some kind of location bias has possibly come into play here. Although many of us are less likely to buy a shirt from another English club, our judges were obviously exposed to much more marketing hype than, say, if they lived in Yemen.

NOTE: I’d like to take this moment to sincerely apologies for any fantastic Yemeni shirts we’ve missed off our list. 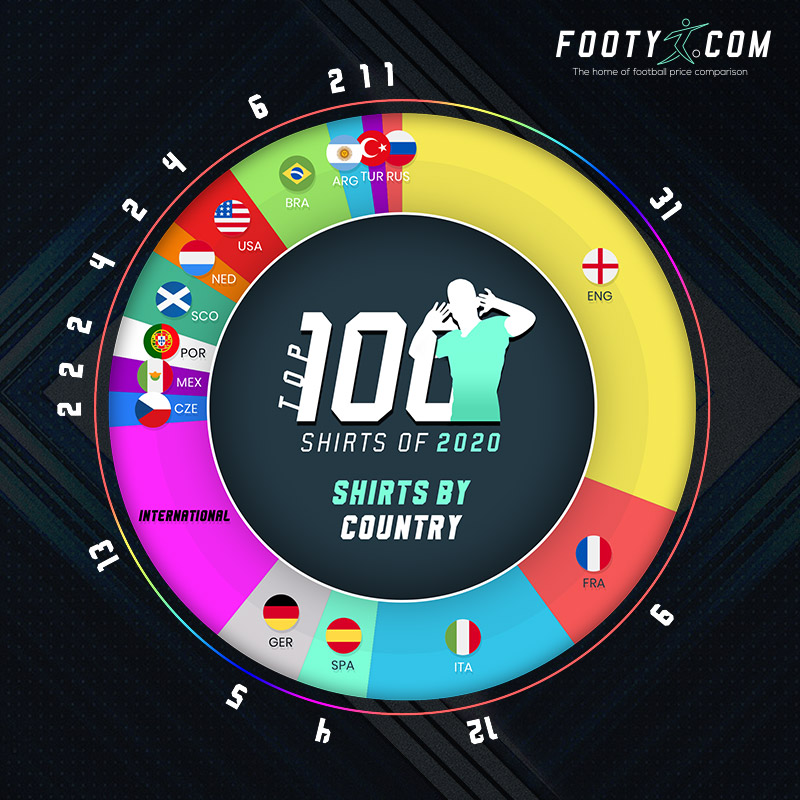 However, it’s also fair to say that loads of English clubs simply happen to have cracking kits, and there was unsurprisingly plenty of love for Italian shirts. Germany, France, Spain and Scotland also featured multiple times, but there wasn’t much to separate them from Brazilian, Mexican and American shirts this year.

Ah, you’ve probably also noticed that we’ve grouped international shirts together as a single group, simply because we wanted to see how they stacked up against the clubs. The likes of South Korea, Norway and, of course, Nigeria have ensured it’s been an incredibly strong year for national strips, and they actually rock up into second-place here.

From dazzling mosaics to swirling brushstrokes, there have been some insane shirt patterns this year. There was obviously a meeting over at Brand HQ where they all unanimously decided to go a bit nuts, and the end result has been nothing short of mind-blowing. Seriously, it’s a good time to be a shirt geek. 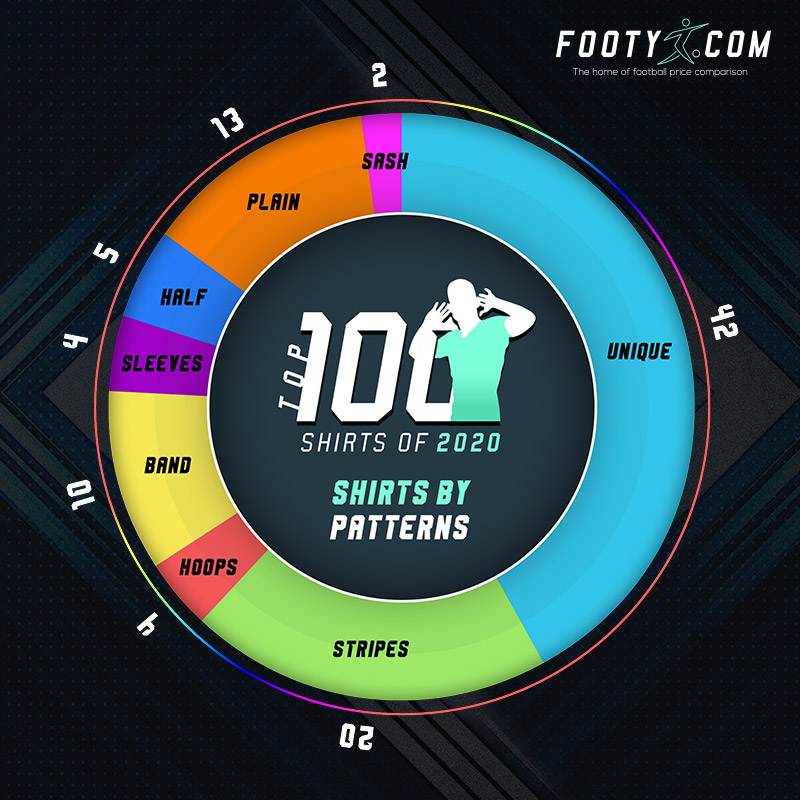 Although some of these *ahem* exuberant designs inevitably sailed wide of the mark, others fell into the category quite clearly labelled “bangers”. Bristol City, Red Star and Forward Madison are the teams which immediately spring to mind, and it’s not surprising to see that such unique, inventive patterns are by far the most popular.

Not every great shirt needs a bespoke graphic, though, and it would kinda ruin their appeal if they did. In some cases, glorious simplicity is the way to go, with AS Roma giving us the best example of a gorgeous “plain” shirt this season, while stripes were clearly more popular than any other type of pattern.

I guess this is hardly surprising since so many teams play in stripes, but some brands have done an outstanding job of freshening things up here. Nike, in particular, have done great things with the classic Inter, Barca and Atletico looks, while the return of PSG’s Hechter stripe has also gone down an absolute treat.

Puma’s Slavia Prague kits were the pick of the half-and-half designs, and it seems there’s still nothing wrong with a good chest band, hoop or intricate sleeve pattern. Man, shirts are awesome.

Battle of the Brands

Think of this as our Football Shirt Constructor’s Championship, just without any screeching car noises. We already know that Bristol City have the best shirt of 2020 (congratulations, once again!), but now it’s time to officially crown our Brand of the Year.

Before any head offices or designers start biting their fingernails, I should probably explain how we’ve actually done this. After all, it isn’t enough to simply count how many shirts each brand had in our Top 100, because the shirt in 98th obviously isn’t as good as the shirt in 1st. No offence to Fleetwood Town.

Instead, brands have scored points based on where each shirt finished in our table. For example, Nike received 1 point for their Brighton kit (which finished 100th), while hummel got 100 points for the Bristol City goalkeeper shirt (which came first). Yeah, I should really have called this the Eurovision Shirt Contest.

After dishing out all the points, our Battle of the Brands table looks like this…

That’s right! Our fairly complex points system was rendered pretty much useless, because our Brand of the Year was never in doubt. Featuring a whopping 31 shirts in our Top 100 of 2020, the guys at Nike have absolutely knocked it out the park. I believe some applause and champagne uncorking may be in order.

Along with hummel, Nike dominated the top 10 with their stunning designs for Inter, Nigeria, Roma and Portland Thorns. In fact, they dominated most of the list in general, following up their template-less vows with a sensational collection which has already cost me a lot of money. I regret nothing.

Compared to last year, Umbro and Puma have essentially swapped places, with the Big Cat pulling some incredible patterns out of the bag this year to take second place. adidas just about edge out hummel in third, but we really need to take a moment to acknowledge the incredible work done by the Danish brand.

Alongside the triumphant Bristol City kit, hummel have also come up with insane shirts for Forward Madison, Southend United and so many others this season. Their stature is growing exponentially in the shirt world, and it’s great to see them firmly knocking on the door of the “big three”. 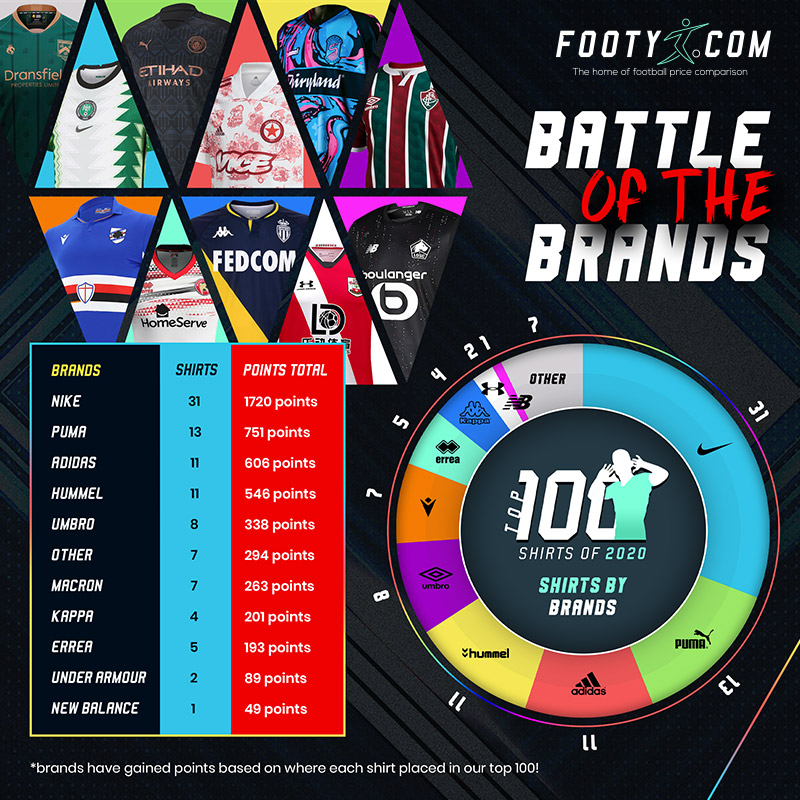 It’s been yet another incredible year for football shirts, and we’ve got all these brands and designers to thank for it. Many have gone bigger and braver than ever before, and that’s something I sincerely hope continues in 2021.