Gareth Southgate has called upon parents and coaches to support The Football Association’s Respect campaign, having led the contributions to a ‘We Only Do Positive’ handbook.

Research from The FA has shown that 90% of young players perform better with positive encouragement and the insight has shaped the Respect campaign’s new mantra [having been originally launched in the 2008/09 season] ‘We Only Do Positive’.

The campaign aims to improve touchline and on-pitch behaviour in youth football across the country by raising awareness and the importance of Respect among a new generation of parents, coaches, volunteers and players.

Released to grassroots youth coaches across the country to reinforce the importance of the campaign, the ‘We Only Do Positive’ handbook focuses on Gareth Southgate’s five positive principles of coaching:

‘Build a positive team around you’

‘Instil an anything is possible attitude’

Grassroots youth coaches are encouraged to implement the principles in order to benefit the development of young players on and off the pitch. The book features four youth team coaches in boys’ and girls’ football who successfully implemented ‘We Only Do Positive’ at their clubs.

This season’s Respect campaign has coincided with impressive results in affiliated youth football across the country with nine in 10 club officials stating that on and off-pitch behaviour is a positive match-day experience for players, spectators and coaches [data captured at 114,000 fixtures from U7 to U18 clubs in September to November]. These statistics will be tracked and reviewed quarterly.

The ‘We Only Do Positive’ handbook was launched with a mock press conference held at St. George’s Park. The England manager fielded questions from eight to ten-year-old children from Willesley Primary school.

Gareth Southgate said: “I’m hugely supportive of The FA’s ‘We Only Do Positive’ mantra as I’m a big believer that positive encouragement is vital to young people’s development.

“As coaches, our job is to help give young people confidence, the same is true for parents. Youth football has to be about fun and enjoyment. It is so important that children are encouraged to develop, flourish and grow their love for playing football. That should be the priority for all coaches.” 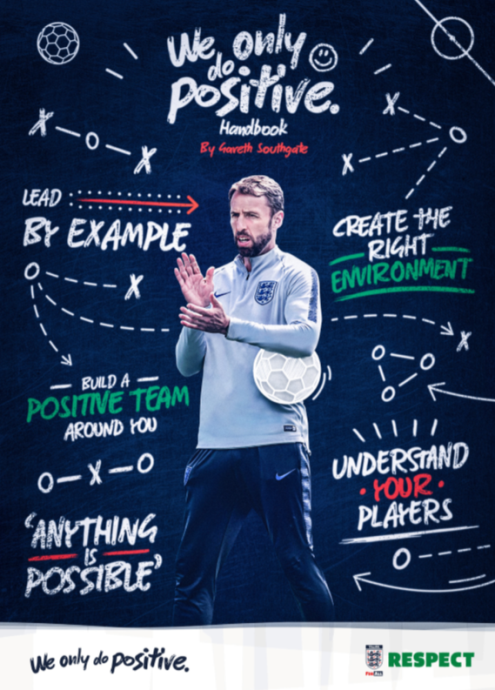 Parm Gill, Head Coach at Guru Nanak Under-14 girls’ from Kent and a contributor to the handbook, said: “I’m proud to feature in such a positive and encouraging handbook for youth coaches around the country.

“Our role as grassroots coaches is extremely important in ensuring we are encouraging youth players to fulfil their potential on and off the pitch so it’s great to see the positive impact that The FA’s wider Respect campaign is having on grassroots football clubs. It’s fantastic that a coach of Gareth’s calibre is contributing to grassroots football.”

The FA’s ‘We Only Do Positive’ Respect campaign will continue throughout 2019, with a variety of England players featuring in an exciting campaign to support The FA’s initiative at the start of the year.