fcbusiness speaks to Lee Hyde, director of retail operations at Ipswich Town about the club’s recent investment in its online and in-store retail technology platforms.

The world of retail has undergone dramatic change in recent years and with shopping sites like Amazon and Asos redefining the rules and increasing expectations amongst consumers, not least in terms of ease of use and speed of delivery, the rest of the retail world has had to wake up and catch up.

Whilst this has seemingly left the high street in tatters with some clear losers, football hasn’t been bitten quite so hard, but it has had to keep with the times and adjust its retail business practices accordingly to stay apace with the expectations of its fans as consumers.

Whether you like it or not, fans expect to be able to shop and purchase items with the service and delivery terms that are as favourable as those in the retail world and all on the device of their choosing – mobile, tablet or desktop. But it’s not just online where expectations have risen.

In-store they expect speed of service and contactless payment options, as well as a retail experience that is visually pleasurable and offers a wide choice of items. Aware of this continually changing environment and beginning to feel the restrictions within the confines of a retail legacy system that was no longer fit for purpose, Ipswich Town has invested heavily in revamping its online and in-store retail technology platforms. 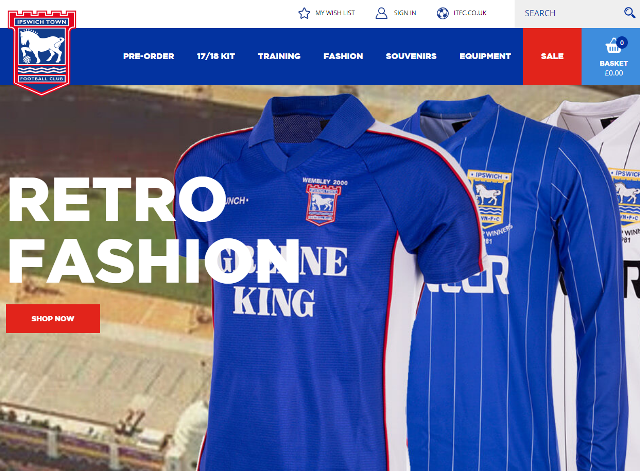 “We basically had a legacy system throughout retail,” said Lee Hyde, the club’s director of retail operations. “Everything from our tills and ecommerce software, to logistics and warehousing – it was all powered by a system that was 15 years old.

“The modern expectation of a customer is to provide that immediate functionality, access to promotions and sufficient payment and delivery options which we were struggling to do with our legacy system.”

Having identified the need to invest in the retail side of the business, Lee spent the next two years identifying new partners which would enable them to fulfill their project needs and create an environment that would match their fans’ expectations.

“It’s been a long winded project but we really did need to revamp everything. What we had was old and it didn’t have the flexibility to do what we would like it to do – create a true omni-channel experience.”

Creating an omni-channel retail environment was crucial to the project and would allow the club to combine its online and in-store retail experience giving fans access to promotions and special offers in both environments.

To achieve this it was essential that the club developed a website that was compatible across a range of devices including mobile, tablet and desktop. But it was also crucial that the new system allowed total flexibility across devices that Lee described as “game changers” for the club.

“Previously, our fans couldn’t go on mobile and tablet and do things like put names and numbers on the back of shirts. We used to have a high number of calls into our offices from people saying they couldn’t do something, how do they add a name and number on a shirt? It became an everyday occurrence but the expectation is that you should be able to do it.

“Now, thanks to a retail site developed by Reading Room, that’s all been taken away and we’ve a fully responsive, fully compatible website across all mobile, tablet and desktop devices which is a major move on for us. It’s eradicated that old, dated legacy functionality that was restricted on certain devices.”

Ipswich Town’s current club website is hosted through the EFL Digital template and so the retail site has been built as a standalone website which meant it was important for them to get the layout and visuals aligned to the club’s brand as well as create a good online experience for customers.

They also spent a lot of time researching the online retail environment looking at functionality and navigation, drawing inspiration from some of the leading sites such as John Lewis and JD Sports.

“We took inspiration from a wide range of businesses in the retail sector. We looked at those that were selling services and not necessarily consumer goods too. There were certain elements of their layout or navigation that we thought were really fresh, looked really good and were easy to use,” he added.

In addition to the look, compatibility and functionality of the site, payment gateways and the security of customer data were also elements of huge importance during the development.

“Security is the one thing that’s going to stop the older generation from ever wanting to shop online because of all the horror stories that go around. It’s also the one thing that concerns the younger generation, those that have grown up with the internet. It’s probably one of the main concerns about shopping online – having your data stolen or cloned and accounts hacked, etc. It’s definitely been one of the major headlines.”

To address those problems, information is stored on a cloud-based system across multiple data centres. “We’re hosted on the AWS platform (Amazon Web Services), so it’s as resilient as it gets. Our CIO has been working with Reading Room to ensure that is as locked down as it can be. We can never say never as attacks come from all sides of the globe but we’re as confident as we can be that personal data is absolutely 100% protected.

“In terms of payment, in addition to a new partner, we’ve also included PayPal which is the first time we’ve ventured onto this platform. So we now have PayPal express check-out and that’s another advancement fans can see. But I think there’s an expectation now – look across most of the major retailers – there’s a reason they all have it on their sites.

“A lot of it is behavioural. If it’s an option they’ll use it because it’s so easy. They don’t have to go get their wallet and credit card, maybe they’re not at home with their cards on them – it’s opened a doorway within the site and, although it’s really early to say at the minute, around 40% of our revenue so far has gone through PayPal, which speaks volumes.”