When Liberia was faced with the Ebola outbreak in 2014, football became a tool for changing raising awareness and helping change people’s behaviours in the face of crisis.

“We were serving as ambassadors. We were all footballers and something like local celebrities, so people listened to us. I would say: ‘Look at me, I’m not playing football for fear of contracting the virus,’ and they might say, ‘Oh, I have to listen to him.’ That was how it started.” 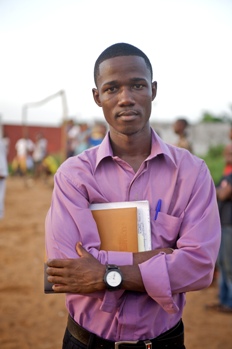 Back in 2014, it was dark times even for a country that had recently gone through 13 years of civil war. The Ebola epidemic would kill more than 4,000 people out of a population of just over 4 million in two years. The first cases were reported in March 2014 and by early August, the country was in a state of emergency that wouldn’t be lifted until November. Liberia was reporting 300 to 400 cases a week in August and September, 2014. Schools stayed closed for seven months. Football of all kinds was suspended on July 29 and it would be a year before the national team was cleared to play at home.

Nusee lived in the Sinkor district of Monrovia in 2014. He said: “My house was in a slum, where the houses are near each other. One house will affect you, because it’s a close neighbourhood. There was a curfew from 9pm to 6am. Everything was closed because everyone was afraid any other person might have the virus. People were stuck in their homes, living in fear. It was really really tough.

“Even family members didn’t come in close contact; Ebola broke that bond. We didn’t move from home. We didn’t visit.

“It was one of the worst times we have ever had in Liberia. It was worse than the war, because during the war you knew some safe zone, but with Ebola you couldn’t run away; you’d take it with you.”

Millennium Stars was formed in 1997 during the civil war by a group of football-mad teenagers. The team became a model way for boys to avoid being forced into the fighting as child soldiers. There was safety in numbers.

The teenage Millennium Stars toured the UK with their story of peace in 1999. They went from grassroots team to the Liberian second division in consecutive seasons as players grew and improved. Most went on to represent the biggest teams in Liberia, winning medals and golden boots and even representing their national side. They continue coaching local kids every week up to the present day.

Even when rockets were falling and bullets were flying, Nusee would still play, but that behaviour had to change in 2014.

He said: “There were people still taking risks to play football for a few minutes for excitement. I saw some guys playing football one morning. I didn’t know them, but I approached them. ‘There’s no need for you guys to practise because you don’t know how you might have contracted the virus and football is a contact sport. You could infect up to 21 other persons in a game of football, and not just them but their families and friends.”

When the government announced a ban on sports and mass gatherings in July 2014, Millennium Stars informed parents personally that practice was suspended.

“The most difficult was the kids. There were no facilities to keep children indoors – no TV, no play station – the only source of entertainment was to go out and play. You can tell them don’t go and play football or the smaller games they play, but it was very difficult to stop them. And you don’t know where their friends have come from. For parents, it was very very difficult, because you had to keep your eyes on your children all the time.”

As they toured the community, Millennium Stars found that they were answering other questions, so they began taking piles of the official guidance on Ebola, especially those printed in graphic form for those who couldn’t read.

“People didn’t want their relatives cremated – it’s not part of our culture,” Nusee continued. “But Ebola victims were not being buried safely. They were going under the water table, and the government decided they had to be cremated. So people were trying to bury on their own in secret.”

The team organisers kept in touch via mobile phone or in the open air under palm trees and discussed using their status in society to do more. They saw a need to go beyond Ebola education and prevention to direct aid – even though that would be putting their own lives at risk.

Through an online fundraising campaign, they raised £1500 to buy buckets and taps, chlorine and disinfectant, soap and hand sanitizer, and food – and headed off to distribute them at a number of communities and orphanages. 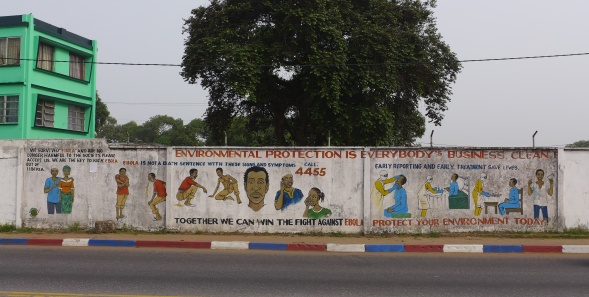 West Point – a sandbar jutting into the sea and covered with higgledy-piggledy shacks – had a reputation as the most cramped and lawless slum in the country. Now it was the epicentre of the epidemic, its overcrowded lanes and alleys the perfect breeding ground for Ebola. It was thought at the time to have only four toilets between an estimated 70,000 people.

West Point went under quarantine in August 2014, with the sudden appearance of barbed wire, barricades and military patrols. Soldiers fired tear gas into an angry and disbelieving crowd. The quarantine lasted 17 days, until the government bowed to pressure and the need to deal with the dead bodies going unattended within.

In January 2015, Millennium Stars visited the still suffering West Point community. Maintaining their own protocols of hygiene by frequent handwashing and walking the few miles to the slum, and with Nusee driving the items in his ancient Toyota Corolla (168,000 miles on the clock when he bought it), the footballers set up a makeshift distribution centre at West Point’s muddy heart, announced their intentions and handed out their items to community elders they had managed to contact in advance.

Next they went to Cape Mount, a rural county six hours drive or more from Monrovia. The community of Zubah Town – despite its name, a village of only 10 or 20 families – had also been quarantined. The virus had caused huge devastation, leaving a large number of orphans to be looked after by grandparents or merely foraging for survival.

No-one in Zubah Town knew the team was coming, so when the car stopped in the centre of the few mud-and-straw huts, they were greeted with fear and suspicion. Gradually, people appeared. They looked thin, ragged and badly cared for. Millennium Stars handed out their aid, including a 60kg bag of rice and a jerry can of cooking oil. Then everyone relaxed and began to talk.

On June 9, 2016 – after two years – Liberia was finally declared Ebola-free. Nusee believes now that the value of their efforts was as much in solidarity as in aid and awareness-raising.

“The call for us was not to be complacent,” he stressed. “It was the right time to step up the fight. We are proud of what we did.

“We wanted to go beyond Sinkor, to those people that were less fortunate, to those who couldn’t afford the necessary items, and help them prevent the spread. We did it with great caution. We would come and talk to them and present the items to them and just do our own part.

“We were extremely happy to see our brothers and sisters smiling again and to be part of the joy-making.”

In March 2020, coronavirus reached Liberia and safety measures are in place again, but Millennium Stars are ready. They are now part of a network of grassroots teams for boys and girls called Onside. Once the government ordered all sports activities and gatherings to be suspended, the organisers switched to community education.

Nusee added: “A parent came to us and said his son told him practice is still taking place, but we know we suspended ours more than a week ago. So we went to search in the community and found a game taking place. We informed them of the rules and sent them home. After that, we went round the community and informed all parents what had happened and that whatever the children say, sports gatherings have been suspended.

“We are experienced now because of Ebola. Everyone is on watch. Everyone is now taking serious precautions. As a community team, we know what we have to do.”