More than 550 guests attended the black-tie event, hosted by BBC’s Dan Walker at The Point at Emirates Old Trafford, Manchester. Winners were named in nine player categories, as well as in a raft of other honours – including the highly sought-after Goal of the Season, as voted for by fans from around the world. 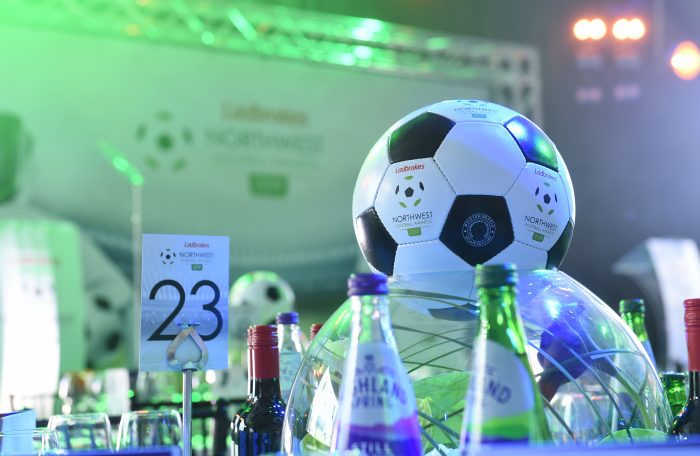 Champions League winners, Liverpool FC walked away with three awards with manager Jurgen Klopp scooping Manager of the Season whilst Virgil Van Dijk landed Premier League Player of the Season, and Trent Alexander-Arnold named Rising Star of the season for the second year running, in unanimous voting and judging decisions. Club legend, Ian Rush (pictured below with host Dan Walker) was on hand to collect the awards on behalf of the trio. 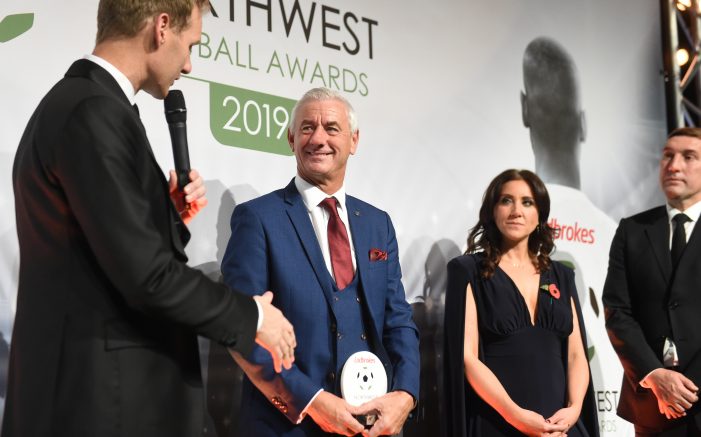 The highly anticipated Goal of the Season was awarded to Preston North End’s Alan Browne for his incredible strike against Bolton Wanderers as voted for by fans on Twitter.

The Lifetime Achievement accolade was awarded to Joe Royle for his achievements throughout his playing career for Everton, Manchester City and England as well as his managerial work with Everton, Oldham Athletic and Manchester City. 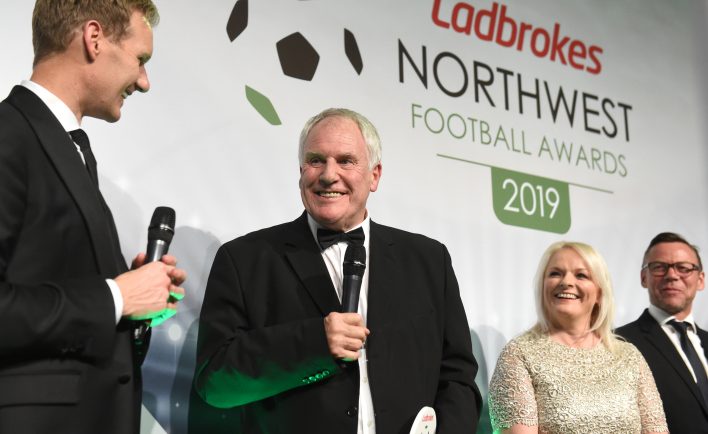 It was also a successful night for Manchester City’s women’s team with England Captain Steph Houghton, MBE being awarded the Women’s Player of the Season and Georgia Stanway receiving the Women’s Rising Star.

On collecting her award, Steph Houghton (pictured below), said: “I would like to say a huge thank you to the fans for voting for this award. Last year was an unbelievable season for me as well as my club Manchester City. To be able to lead my country to a World Cup semi-final and win two trophies with my club was an incredible experience.” 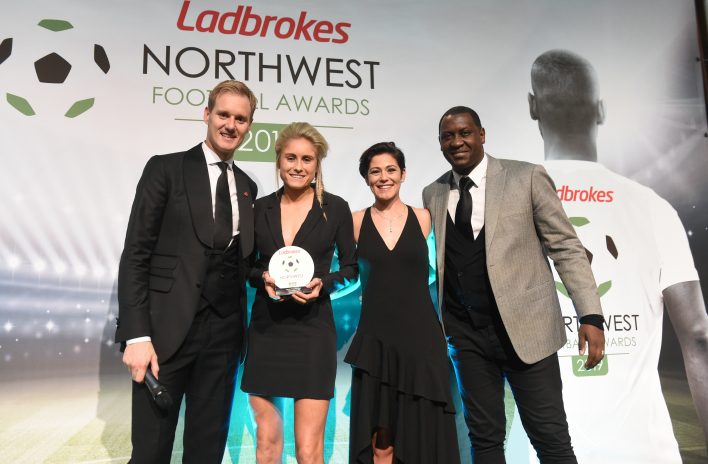 Laura Wolfe of the Ladbrokes Northwest Football Awards, said: “The quantity and quality of entries continues to rise year on year and the effort that the clubs put into their entries is truly humbling.  The array of footballing talent across this region is second to none and I congratulate each and every winner and thank everyone who submitted entries that made the job of our judging panel so demanding, but hugely inspirational.

“As soon as one year is over, we start planning for the next and we are excited to be working with our title sponsor, Ladbrokes for a second year running in 2020.”

During the night, tributes were also paid to the crucial role football clubs carry out in the community, with Manchester City’s City in the Community winning the hotly contested Community Club of the Season for the Premier League and Bolton Wanderers Community Trust winning the Award for clubs from all other leagues, for the incredible work that the Trust did for the community and its own staff during Bolton’s difficult season.

Burnley FC took home the accolade for Community Initiative of the Season for its hugely successful ‘The Leisure Box’, which has seen 29,000 visitors since it opened to the community in March.

The Promoting Inclusion Award, in association with Kick it Out was another hugely impressive category, with the non-league award going to Mid Lancashire Colts Junior Football League and the League honour being scooped by Manchester United for its #allredallequal campaign.

Business and Professional Services to Football went to Mills & Reeve, while the Best Club Marketing, Sponsorship and Engagement Campaign was awarded to Everton Football Club for its 2018/19 home kit launch with Umbro: Built to Last.

The Fabrice Muamba Award for Outstanding Service to Football Medicine and Performance was awarded to three medical professionals who saved the life of former Premier League referee Eddie Wolstenholme, who suffered a critical heart attack and collapsed in the tunnel just an hour before Burnley’s kick off with Newcastle United.  Dr Simon Morris and John Moorhouse of Burnley FC, and  Dr Paul Catterson of Newcastle United FC were all there to accept their recognition award.

The ‘Unsung Hero’ accolade was presented to the staff behind the scenes at Bury FC for their tireless work and effort to save the club as it was facing expulsion from the Football League and ensure that Bury has a football club competing next season.

The Impact Award, which honours and recognises an individual who has made a significant positive impact on football in the region, was one of the night’s special awards. It is awarded to someone who has obviously delivered success on the pitch, but additionally, and just as importantly, given of their time off the pitch and used their position to contribute to and positively impact the wider community.

Premier League Player of the Season

Championship Player of the Season

League One Player of the Season

League Two Player of the Season

The National League Player of the Season

Women’s Player of the Season

The Pie at Night

Community Club of the Season – All Other Leagues, in association with the PFA

Tranmere Rovers in the Community

Community Club of the Season – Premier League, in association with the PFA

Burnley FC in the Community

City in the Community – WINNER

Everton in the Community

Community Initiative of the Year, in association with the PFA

Burnley FC in the Community – The Leisure Box – WINNER

City in the Community – City Play

Everton in the Community – The People’s Place

Kick it Out Promoting Inclusion Award

BE THE BEST COMMUNITY C.I.C

Burnley FC – One Club for All

Everton FC – All Together Now

Business and Professional Services to Football

Northwest Football Journalist of Broadcaster of the Season

Simon Hughes, The Athletic (formerly of The Independent)

Manager of the Season