Managing In The Modern Game: Sean St Ledger - Recruitment – The Key To Success

In the latest instalment of Managing in the Modern Game, a series of interviews looking at specific elements of football management through the eyes of those involved, Dean Eldredge of Oporto Sports Management speaks to Republic of Ireland assistant manager and Leicester City senior scout Sean St Ledger about being thrown in the deep end of management, his extensive knowledge and experiences of football recruitment and how he balances that with his coaching aspirations… 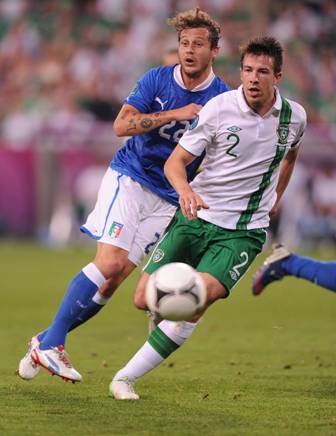 After your playing career came to an end, you were thrust straight in to management in a caretaker role with non-league club AFC Guiseley. What did you learn from the experience?

I would say managing a squad of players and everything that comes with that. We had around 30 players, and I’d gone from just looking after myself, to trying to look after all of them. It was a culture shock. The second major challenge was to manage a budget, which is something I’d not experienced before. This was at a time when the club was keen to reduce the wage bill and were facing the prospect of relegation too. There were a lot of negatives to face up to, with players realising they weren’t needed, again, that was a huge change from my playing days in terms of what was expected of me and the responsibilities I faced.

I had help and support from the academy manager, but he had to run the college programme for the club as well, so there were occasions where it was just me at training, and then I was also involved in the logistics for away games. I would be planning the route, working out where best to pick up players on the way, doing the video analysis of the opposition. I’d completed my UEFA B Licence, but nothing can truly prepare you for such an all-encompassing role and challenge. Most nights I was falling asleep with my laptop in front of me. The long hours, and the management of players is such a huge challenge. I can always remember telling a player he wasn’t playing two hours before a game. I saw the energy just drain from him, and it emphasised that players are the most important people, and how you manage them will determine how successful you are.

You currently hold two roles; assistant manager of the Republic of Ireland U15s and senior scout for Leicester City. How do you balance your commitments and do the roles help each other in any way?

The club have been very good with me and understand the benefits of me working in both roles. I am able to see and work with the best Irish players at that age on a day-to-day basis, whilst working out their character, something which is a key element of recruitment, and is probably the most difficult factor as you’re often relying upon other opinions or reports for that information.

When we play in a tournament, perhaps against Spain or The Netherlands for example, I’m able to track how a player progresses from an early stage, through to them making their first-team debut, monitoring their development on a path and I can return to my notes, building a database of talent and trajectory.

In latent terms, could you provide some detail about how recruitment processes have changed from your playing days to the present day?

The biggest difference has to be the data element. When I was playing there were scouts watching games in the stands, and there still are today, but now with the help of data, which speeds up the initial process of identifying players, and then can also be used as supporting evidence for the eyes watching games and making their observations.

Platforms such as WyScout and InStat allow you to watch players all around the world, making the process much smoother and quicker. This certainly benefits scouts themselves and the clubs. I do still believe that live scouting is vitally important, but having data access, alongside a talented analyst who can see if the numbers back up your judgement, is also crucial in the modern game, at all levels.

What are the key lessons you’ve learned in identifying players and how do you apply this to your daily work?

I would say that being open-minded is crucial. I’ve learned to not make quick decisions, not to be too hasty, as a player can always have a bad game on the day you watch them and you don’t know the full details of why they’ve performed like that. Monitoring players over a longer period of time gives you a better assessment of them, while lessening the risk for signing them and them being able to perform to the standard you need for the first team. It’s also important to consider other opinions, and share information with your scouting colleagues and analysts, in order to make an informed decision.

Returning to coaching, were there any managers or coaches from your playing days who have influenced your style? If so, how?

I’ve been very fortunate to work with some excellent managers during my career, with different attributes and character. One that would stand out would be Gareth Southgate. I was very happy at Preston North End working under Alan Irvine who was probably the best coach, in terms of working on the grass, that I worked with. I really looked up to Alan, and he was very effective in getting his message across and spoke with real clarity. When Gareth took me to Middlesbrough, I was impressed by his demeanour, his calmness in the role. His communication skills were very good, and he listened, which is such an underrated skill. After he departed Middlesbrough, he wrote me a letter, which I still have today. I thought that was a really nice touch. You can see those skills in him, the way he works with players, in his role with England. It comes across in the way he speaks to the media and to the public as well, and is a long way from the more militant approach which is becoming more out-dated within football. It is one thing talking about being this way, but another thing to actually put that in to action. He was always truthful with his players, and that’s something I would want to be.

What are your short and long-term ambitions within coaching and recruitment? Would you ever consider a return to management?

I love coaching. I’ve got my A Licence and will hopefully go on to do my Pro Licence soon as well. I’ve been really fortunate to have played for good clubs, and to have played at international level with Ireland, before going in to recruitment and coaching. This has given me a broad range of experiences. I’ve watched over 700 games in the last few years, seeing various players, watching how managers and head coaches have set their teams up, and analysing tactics, so that information is invaluable to my roles now, and my future in the game. It’s allowed me to form a philosophy in my head of how I would like my teams to play, with intensity, an aggressive approach. I’d want to enjoy and be proud watching my team play, as they represent you and vice-versa.

I’ve been privileged to be on recruitment calls with the manager at Leicester City (Brendan Rodgers), and to hear the clarity in his message on what he wants or expects from a player. To listen to him speak about football, and his intelligence, is almost like a coaching course in itself. I feel like having coaching and recruitment experiences, added to the people I work with and watch, places me in a good position. I’ve got a variety of things going on at the moment, and I feel they will merge together well.

Sean St Ledger has never shirked a challenge. During a 15-year playing career, he made over 300 league appearances, scored for Ireland in Euro 2012, helped Leicester City to the Championship title, experienced two spells in the MLS, before injury forced his retirement and he found himself as a caretaker manager in non-league football.

The challenges haven’t stopped there, with Sean handling the tandem roles of recruitment with Leicester City, and coaching with Ireland. His dedication to learning from others, gaining his qualifications, whilst earning first-hand experience across different, but relevant disciplines, would suggest a healthy career ahead of him.