With the suspension of football matches across Scotland during the nationwide lockdown to combat the spread of COVID-19, the Scottish FA catches-up with various key people to hear how they are adapting to the unprecedented situation.

First up is Head of Referee Operations, Crawford Allan, who took up his post in January 2020.

Crawford, it’s fair to say your first three months in the new job have been unusual, how have you managed settle-in during lockdown and how are you keeping in touch with the referee community?

It has been far from normal or ideal but these are unprecedented times. It’s important to accept the situation – like everyone in the country has had to do – and make the best of it that you can. As you can imagine the majority of the team are working from home and some who cannot undertake their roles because of the shutdown are on furlough. I am grateful to all of them for their understanding and willingness to adapt and even take themselves out of their comfort zones.

We are using a mixture of mediums to communicate, including the traditional means of phone calls and emails but for larger group communications we have the Scottish FA extranet, which allows us to reach out to all referees and the 12 local referee associations to download information.

Like the rest of the world, we are also embracing Zoom and already we have hosted two video blogs, as well as hosting video conferences and online coaching sessions. It’s important to use all the tools at our disposal when we have responsibilities to all 2500 referees throughout the country.

We also continue to support the Scottish FA’s UEFA Coaching Education courses, and last week Tom Murphy and I ran a two-hour coaching session via Zoom on the Laws of the Game for the UEFA B Licence candidates which was due to take place at Oriam before lockdown.

Have you been able to use the time to shape your strategy on how you plan to undertake the role and can you give us an indication of your early thoughts on the challenges and opportunities you have identified?

The one blessing is that the situation gives you a lot more time to think; certainly more than if the season was in full swing. The one area that I have always advocated is open communication and this is something I have been keen to commit to and encourage within my team even throughout this uncertain time. We have the benefit of the technology I’ve outlined to stay in touch from a refereeing perspective but I have also outlined the key areas I’d like to focus on during the short to middle term, including  helping referees develop at all levels and to shine a light on the positive contributions they make.

I get that in this job it is impossible to keep everyone happy, whether it’s match officials who feel they merit promotion or bigger matches, or club managers and players who feel aggrieved at decisions. However, it’s a bit part of my role to support match officials through all these inevitable experiences. The recent BBC documentary with Steven Thompson and Leanne Crichton is a good example of seeing how the life of a match official really is and I think that insight is important.

I would like to encourage two-way, respectful dialogue with coaches and managers, and hope that there can also be mutual empathy. Another important strand of the role is the interface with UEFA and IFAB, especially on areas such as changes to the Laws of the Game, and this is particularly interesting this year when we look at the best time to incorporate any law changes with the domestic seasons across Europe uncertain.

Recruitment and retention of match officials are the two key pillars in development, how difficult have both strands been as a consequence of COVID-19?

Recruitment is key but retention is probably even more important. For every 10 new referees we recruit, we probably lose about eight as they either don’t actually start refereeing – they maybe wanted to pass the exam for their CV, for example – or they give it a go for a few games and then stop because they don’t feel it’s for them.

In recruitment, we just about managed to complete all our various new entrant classes across Scotland for Q1 just before the lockdown took place. This enabled the new referees across the whole of Scotland to sit their entrance exams and we have 106 newly qualified referees desperate for their first game.

However, the next phase of a referee journey to full qualification is to get them active and undertake their first match and be observed in. The longer this lockdown goes on without any football, the greater chance there is of a newly qualified referee not actually getting out there: it’s something we have to be mindful of and communicating with all new and potential referees to keep them engaged.

Retention is a longer-term strategy and links in with the overall culture of football – something I know FIFA and UEFA are keen to work on. This could be focussed on improving the overall culture of football at all levels, for example stopping players from ‘mobbing’ a referee in televised matches, or improving the behaviour on the sidelines at youth or amateur levels. The one certainty is that young players will want to emulate what they see on television and we all have to be mindful of the impact positive role modelling can have both for players and for match officials.

There was a lot of debate on VAR prior to lockdown. Have you been able to look into the potential implementation in more detail and given the financial impact on the game due to COVID-19, what effects will that have on possible timescale?

Yes, VAR was being analysed in some detail prior to lockdown and we have been talking to suppliers and obtaining costs. We have also been talking to a number of other countries across Europe to learn from them: consistently it takes between six to nine months to fully implement VAR and the required infrastructure, and to train all relevant stakeholder groups from referees, to clubs, to media and spectators.

There are financial implications and ongoing year-on-year costs for VAR. With the recent down turn in the economy and income to football in general, this may have an impact on the viability of VAR in the short-term and the timing of its potential introduction to Scotland. I am in favour of its introduction and I know a lot of the Premiership clubs have come out in favour of it, so it may be a matter of timing.

Ironically, the technology was due to be installed at Hampden Park for UEFA EURO 2020 and we had some detailed discussions on whether we could have used the opportunity to have some live testing during the William Hill Scottish Cup semi-finals or finals. Unfortunately the postponement of the Euro finals for 12 months has removed that possibility but I remain optimistic that we will have VAR before long.

I see it more an investment in optimising correct decision making, for referees and the game, but I understand there are far more important matters that we are contending with at present.

With updates to some laws of the game recently from IFAB, can you shed some light on these changes in simple terms?

We received the final copy of changes to the Laws of the Game from IFAB last week. These will be implemented for all new competitions started after 1st June this year. However any existing competitions will be given the option, and allowed to finish under the existing Laws of the Game should they wish (this will allow for any competitions already started but incomplete due to COVID-19 to restart under the old laws).

There are not too many major changes, however a key change relates to Law 10 – Determining the Outcome of a Match – where cautions are not carried forward to penalty shootouts. So for example a player can receive a yellow card during the 90/120 minutes; however this does not carry into the penalty kicks. This applies to all players, however will mean less pressure on a goalkeeper during the taking of penalty kicks to decide the winner of the match. For example, a goalkeeper may already have been shown a yellow card in the course of the game, and they would automatically receive another caution if they were to be penalised for coming off their goal line before a kick was taken. This change will alleviate some of that pressure.

The other key change focus on handball under Law 12 – Fouls and Misconduct. Handball:  the boundary between the shoulder and the arm is defined as the bottom of the armpit (see the diagram). 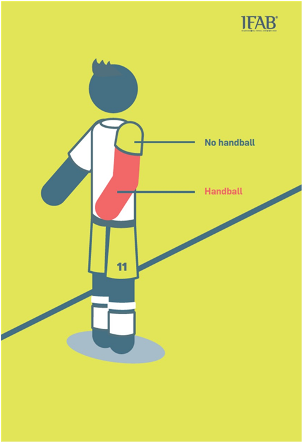 Whilst there are many other smaller changes to the Laws of the Game, ‘accidental’ handball by an attacking player (or team-mate) will only be penalised if it occurs ‘immediately’ before a goal or clear goalscoring opportunity. We will provide video examples of this prior to the introduction of this to help bring this to life before implementation.

Have you used the time to introduce or reintroduce yourself to the coaches and managers and what has your message been?

To be honest, I think coaches and managers are probably in the main happy not to speak to me during the break. However I have been contacted by a small number of clubs – and we have had some good debates around topics such as handball, penalty kick decisions, and have been reviewing video footage. Again, I am generally happy to talk to coaches and managers, and my team and I will happily take calls and try to help people understand the interpretation of the referee – and where the referee has made an error, what we do to help and support the referees.

How do you keep match officials motivated during an unprecedented prior like this, especially when many of them have other jobs that may also be impacted?

I think motivation is a personal thing – and you are correct we have to be aware that the referees also have their own jobs – and some of them are in the front line in the fight against COVD-19, performing a vital role. Therefore anything we are organising for them during this period is voluntary.

However I do find that setting a goal or an objective is something that helps motivate people and keep their brains engaged. That is why we are working on the sessions outlined above, and we are also looking at doing weekly video blogs, the first of which we sent out last week – just to keep the referees engaged and up to date.

What’s the one thing you couldn’t get round to doing before lockdown that you’ve ticked-off?

From a referee operations perspective we are tidying up a lot of our background admin processes and last week we met with Ross Campbell over at Oriam to talk about our 2020 intake for our SCORE programme (Scottish Centre for Refereeing Excellence) which is based on the UEFA principles for its CORE programme. This is a joint initiative between Heriot Watt University / ORIAM and the Scottish FA where around about 10 of our up and coming referees apply each year to undertake a joint programme of academic studies and in-depth refereeing coaching. We are starting to see the fruits of this programme as the 2015 and 2016 intake are now nearing the top of Scottish refereeing and I am sure we will see some of them in the Premiership in the near future.

From a personal point of view I managed to power hose my patio and slabs in the back garden on Saturday – a day I would normally be at the football. Roll on the return of the football but in the meantime, stay home, stay safe.