Rotherham United who were relegated from the EFL Championship at the end of the season tops the table of teams that play the longest average passes during a match.

Data gathered by InStat was analysed by CIES Football Observatory who looked at the average length of passes by teams from 35 European domestic leagues.

The study highlights big discrepancies in playing styles with almost 8 meters difference between the teams that executed the longest and shortest passes: Rotherham United (23.42m) and Paris St-Germain (15.85m). 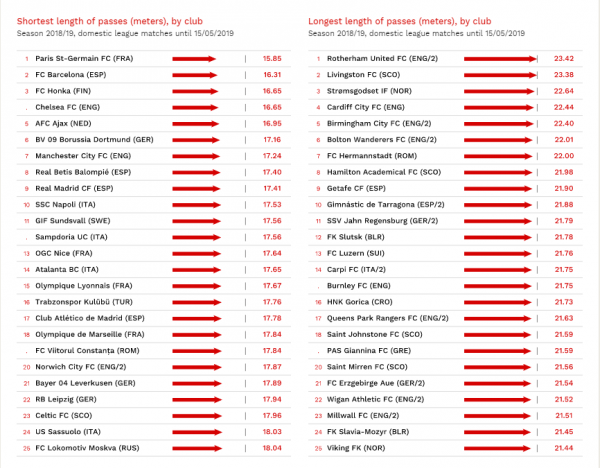 The analysis found many of Europe’s most competitive teams are in the top 25 of the rankings for the shortest passes, including Champions League semi-finalists FC Barcelona (2nd) and AFC Ajax (5th), as well as Europa League finalist Chelsea FC (4th). On the flip side, the vast majority of teams executing the longest passes were in the bottom-half of the table in their respective leagues. Getafe CF the exception that confirms the rule.

The analysis per league also reveals the persistence of cultural differences in the approach of the game. Teams from the Scottish Premier League (21.08m) and the English Championship (20.58m) execute on average the longest passes whilst at the opposite end of the table, the French Ligue 1 and the Finnish Veikkausliiga (18.89m in both cases) played the shortest passes.

Managing in the Modern Game: The Assistant – Derek Fazackerley