Teqball is continuing its international expansion plans with the appointment of experienced sports sponsorship expert Spencer Hidge as Events and Sponsorship Director.

Tasked with helping to deliver revenue growth and long term brand development, London based Hidge joins Teqball in what is a period of rapid growth for the brand.

Heading into the second half of the year, the company is looking to extend its sales reach, build a competition framework for the sport and further embed the brand in the global sports arena.

The International Teqball Federation (FITEQ) has already begun to help develop a number of national federations across the world and this is expected to continue at pace in the coming 12 months. The move is hoped to increase uptake of the sport and create more opportunities for people to play and compete in international Teqball events.

Teqball co-founder Viktor Huszár said Hidge was the obvious choice for the role considering his in-depth knowledge of the international sports industry and his track record of delivering high profile events and long term brand partnerships within sports.

“We feel Spencer will be a great fit for Teqball and the vision we have to grow the sport across the world. He has an impressive combination of experience working with rights holders, sponsors and high profile brands that we believe will enable him to achieve what we’ve set out to do and we look forward to having him on the team,” Huszár said.

In 2009, Hidge took on the role of Group Sales Manager at Upper Street Events where he created The Gadget Show Live, what became the largest technology consumer event in Europe. He then went on to head up the global sales team at Soccerex, selling key sponsorship deals for its conferences worldwide.

Most recently Hidge was involved in creating the Premier Sports Network, a series of private, invite-only networking events attended by influential representatives of elite sports brands, clubs, governing bodies and franchises to discuss best practice on the topics of finance, recruitment and athlete welfare. 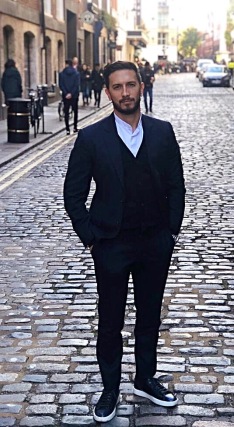 “I’m excited to be joining the Teqball team and think I can make a real impact to growing both the sport and the brand. It’s not often you get the opportunity to be involved in a sport from its infancy and I believe it has huge potential and will be an attractive proposition to prospective sponsors and rights holders as it continues to develop,” he said.

Teqball has experienced an astronomic rise since its invention in 2014 and is now played by thousands of people in over 66 different countries. The sport is also played by some of the world’s top footballers, including Neymar, Messi, Felix, Lingard and Rashford among others, as part of their training regimes.

There are tables in most Premier League clubs and more in Europe’s LaLiga and Serie A leagues, including Ajax, Real Madrid and Paris St. Germain. Former FC Barcelona superstar Ronaldinho also plays regularly and has declared his dream of one day representing Brazil if teqball reaches the Olympic Games.

FITEQ was first established in 2017, with the primary mission to introduce and develop the sport globally and has since staged two World Cups in the sport’s birth place of Hungary and Reims, France.

For more information go to teqball.com