WHAT A NOBLE SHOW!

When Mark Noble walked out to a guard of honour from his West Ham teammates and Manchester City players he wasn’t just bringing the curtain down on a unique one club career.

The reception he received from a London Stadium packed to the rafters with fans celebrating a season they had only dreamed of before also highlighted a happy ending to a fairy tale that Noble and those supporters must have doubted would ever happen.

Cast your minds back to March 2018, two troubled years after West Ham made their controversial move from the former Olympic Stadium to the London Stadium, very much against most of their fans’ wishes. And following a 3-0 home defeat to Burnley all their pent up frustrations erupted in an ugly protest that saw the club’s directors having to flee to safety amid a hail of insults and missiles.

Noble himself is unlikely to forget being pictured angrily wrestling a rioting fan to the ground on what was probably the one and only day in his 22 years at the club that he might have wished he wasn’t there. Such was the acrimony from fans who never wanted to leave their old Boleyn Ground for a home they thought just wasn’t a fit and proper place to play football in.

The fact that they’d been handed a 60,000 capacity state of the art stadium for next to nothing in big money terms – and that West Ham’s owners actually saved the Government from a huge white elephant headache and secured the club’s financial future in the process – just didn’t seem to matter a jot at a time when emotions ran sky high. It was, to put it mildly, a recurring nightmare unfolding before everyone’s eyes.

Fast forward to today and it’s a very different story, thanks in the main to a combination of success on the field and a philosophy embracing working class family values at its core – and a right good East End-style knees up while they’re at it! All of which involves putting on a quality – and affordable – show, on and off the field.

No one has any doubt that success in the Europa League this season has played a huge part in changing hearts and minds. And in particular the spectacular pre-match shows West Ham have put on.

OK, so they’re not in the same league as The Greatest Show On Earth that the legendary Cecil B. De Mille filmed 70 years ago and which is still hailed as a masterpiece of its time. But we’re in a totally different era now, and as far as UEFA is concerned the unique lights, music and mosaics extravaganzas that West Ham have staged on European nights this season are now acknowledged as the benchmark for the rest of football here and abroad.

As Noble, says: “The light shows and the mosaics have been really special. You can’t underestimate how much that pre-match build-up show adds to the atmosphere. As players you can feel it in the warm-up, and then when we come out for kick-off the place is bouncing. I’m going to miss that.” 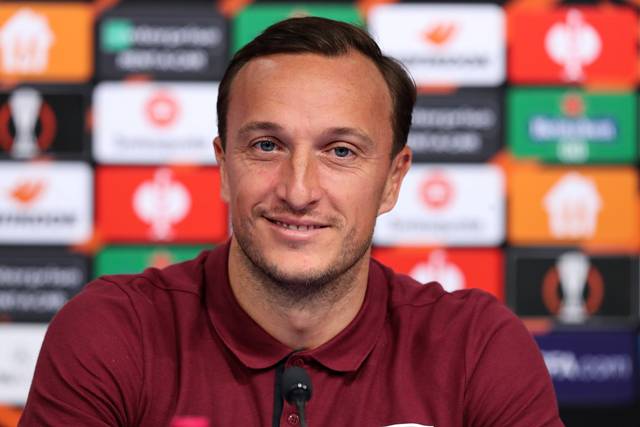 West Ham are only too well aware that they are also unique in that because of all the controversy that surrounded the move to their new home the club is arguably the only one in Europe which has literally had to win over its own fans all over again.

A large chunk of that mission fell to Jayne Quinton, the club’s matchday producer and a Hammers fan to boot, who has  played a major part in wooing disenchanted supporters back ‘home’ again at a time when all seemed lost.

She is the first to admit that when West Ham moved to the London Stadium the acrimony was such that they felt the club was at the foot of a massive mountain they had to climb to win fans over.

“But we never lost that feeling of being a family,” she says. “The hurdle was the stadium and now we feel we have probably got over that. The fans appear to have accepted that the stadium is now their home. It’s not a conversation piece anymore. That’s more about keeping Declan Rice etc. That shows how far the club has come.

“Our priority has always been to give our fans the best night of their lives and that’s what we hope we’ve done. We know we’ve done our job when the amount off stuff on social media is so happy. It’s all been about how magnificent the stadium looks. It’s a stunning stadium, a beautiful stadium, and it’s wonderful to see it rocking. We do it for our football family and to give the buzz we want to create. And the success is there for all to see. It’s a big team effort and we’re proud of it.”

The famous bubbles that West Ham fans have always blown proudly have been another permanent fixture, of course; along with a pitch side DJ whose playlist of hits blasted out at a high decibel level supporters seem to love.

“The fans have really adopted him. He’s bridged the gap with them,” says Jayne. “If fans come in early and want a party, we’re ready to go. It’s flexible. We always have a bubbles spot and that’s a key moment because that’s our song. But we pride ourselves on putting on the best show possible. And we have a strong team with a strong mix of creativity and technical abilities to do that.

“We did look at other clubs who were bringing in lasers, but we felt the fans were getting left behind in a way, so when we sat down the top of the list was that we needed to take the fans with us with these pre-match shows. We didn’t want to throw these shows at them we needed them to be part of it. It has to be that two-way experience and bringing us all together.

“Every matchday is unique, but we think ours eclipses anything else in Europe at the moment, and UEFA have said that with the light shows and mosaics we are setting the benchmark.

“We are not competing with other clubs; we are just doing this our way for our fans.”

But no matter what they have done on European nights you could say Jayne and Co. saved the best ‘till last, or 15th May to be precise, when Noble finally hung up his playing boots and bowed out with another West Ham showstopper just days after his 35th birthday.

Along with a Euro style light show, of course, the red carpet was laid out in style for the legendary midfielder who has been with West Ham since supporting them as a boy, and has made more than 500 appearances along the way. The whole day against Manchester City was dedicated to saying a big thank you to a loyal servant the like of whom will probably never be seen again.

“It had a real fan aspect to it,” Jayne recalls. “A street party vibe with soundbites and personal messages from supporters on the big screen. There were also selfie pods for fans to take pictures with Mark and life-size cut outs of him.

“When he came out there was a guard of honour with West Ham and Man City players. There were half time tributes to him followed by a post-match lap of celebration and an LED light show with Mark Noble content. Then people who have been special in his life took to the pitch as well.”

In the meantime plans have also been revealed to increase the stadium’s capacity to 62,500 seats, reconfiguring the West Stand Lower Tier to develop a more traditional football stadium layout and bring the upper and lower tiers closer together and more fans nearer to the action. And the ultimate aim is to increase that even further to 68,000 seats, which would make it the biggest capacity stadium in London apart from Wembley.

It’s all part of the plan to bury once and for all the antagonism that blighted the club’s move to the London Stadium with affordable prices for families that include a new adult season ticket for just £299 – the cheapest Premier League price in London.

As Vice-Chairman Baroness Brady, says: “We are working hard to improve fans experience and the increase in capacity will see The London Stadium become one of the highest-attended grounds in the capital – and indeed the country.”

Hammers Manager David Moyes, added: “Everyone here is doing everything they can to grow and develop this club, on and off the pitch, for the benefit of our supporters, and we all feel that things are moving in the right direction. The atmosphere our supporters have created this season has been right up there in every game. Having more fans in the ground will make it even better for us all.”

It is in fact an amazing turnaround  for a club that was in danger of losing its entire fan base not so long ago, but which now proudly claims to be the home of affordable family football in London.

“Season tickets are as cheap as they come in London at a time when we are competing in the higher echelons of the Premier League and Europe as well,” Quinton added. “We’re selling out every game; it takes time, but we’re there now.

“The board are delivering on their promises. We are in the top area of the Premier League and are competing regularly in Europe –  and long may that continue.”

As the old cliche says: The show must go on.