Supponor, the virtual replacement specialists, whose technology integrates with perimeter LED displays, have recently launched a crowd-funding campaign to help drive their next wave of development.

They’ve just reached the halfway point on their drive to raise £1 million of investment so we thought it would be interesting for our readers to understand a little more about the campaign following some recent high profile contract wins.

A little about Supponor

Supponor has been working in the augmented reality (AR) space for over a decade. In that time we’ve been developing – and deploying – virtual replacement advertising in sport. The team is split primarily between our R&D facility in Finland, and our operational and commercial arm in London.

At the heart of our proposition is our patented DBR Live technology, which enables us to digitally replace the advertising content that typically frames the pitch/court/field in major sports events. This means that media rights owners using Supponor’s technology can deliver different brand messages into individual viewing territories – essentially commercialising their highest profile media space multiple times over.

DBR Live combines advanced camera optics with intelligent object masking and powerful software. This enables us to produce multiple broadcast feeds of a single event (e.g. a football match), in which the perimeter advertising content that frames the pitch can be changed for different international audiences.

We’ve got some pretty cool customers
Some of the world’s biggest leagues, brands, clubs and federations trust our technology.  DBR Live has already been used in a number of major sports leagues and we continue to seek approval with other key sports properties. The table below demonstrates the markets in which we are operating/undertaking notable trials.

The latest version of the technology, which integrates with ADI’s LED perimeter boards, has been approved for use by the DFL in Germany’s Bundesliga, and will be fully deployed from the beginning of the 2018/19 season. Facilitating a major new contract, together with ADI, we’ll be providing multiple virtual feeds for Borussia Dortmund matches, as well as a selection of other high profile games.

According to Nielsen Sports, virtual replacement advertising technology is forecast to have a €60m incremental impact on club revenues in Germany’s Bundesliga when Supponor’s AR platform launches next season.

A major breakthrough in North America saw deployment of virtual replacement advertising in the NHL’s World Cup of Hockey, which utilised the tech in the 2016 finals. The deployment transformed the static dashboards into a dynamic digital canvas for TV viewers, allowing brands to more effectively activate their partnerships. 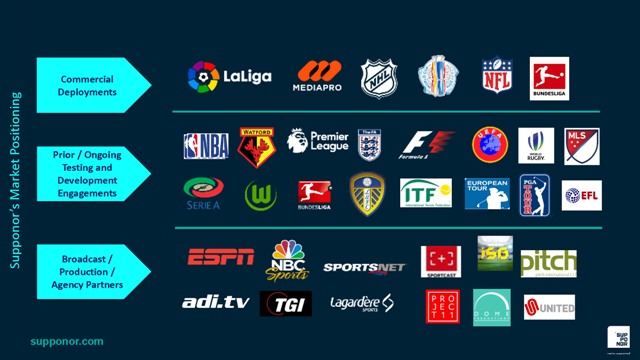 Why the time is right

Whilst Supponor has been working in the virtual advertising space for over a decade, it feels like the market and the technology have finally caught up with one another. One stumbling block for the wider adoption of our technology in sports such as football has been the fact it wasn’t previously compatible with LED advertising boards. The latest innovation, however, combines the ability to deliver visible LED in the stadium with the ability to virtually overlay the content for viewing audiences.

The timing of the launch of the new LED hybrid system feels like it couldn’t be better. Sports clubs and federations are increasingly ‘internationalising’ their brands. You only need look around Europe and see how the major clubs and leagues are developing international strategies. As the Premier League’s Richard Scudamore puts it “If you are going to sell global you better be able to localise.”

Outside of soccer, major US sports are attempting to extend their reach too, with MLB following the lead of the NBA and NFL in staging international matches in London.

So why are leagues and teams seeking to extend their international reach? The answer seems obvious to us… Brands demand more value, and one way to deliver this is by growing ones audience. But brands won’t be satisfied with this alone – they need to be able to tailor their message for each individual audience in order for it to be effective.

Hyper-targeted future
Whilst we feel the next 12 months will be a breakthrough year for our virtual replacement advertising technology, the future is even more exciting. Ultimately, the time will come when in game perimeter advertising will be hyper-targeted; matching brands and individual viewers so they see brand content most relevant to them.

We’re already able to serve different brand messages to individual broadcast regions, which is a huge step, but we can also target viewers by device, meaning that fans watching the same game on a mobile or tablet can be served different brand content to those watching on TV. The future vision for our platform means we’ll be able to help brands reach sports fans based on their individual preferences and interests.

But what about the immediate future?

This latest investment drive is key helping us accelerate our short term growth which will help us position as the leading provider of such virtual replacement technology.

Our strategy is focused around gaining approval of virtual replacement advertising from a wider range of sports federations and governing bodies – all of which has considerable operational costs – and by dramatically increasing the scalability of the technology in order to satisfy this rising demand.

Critically, we’ll use new funding to complete the next generation of our optics technology (allowing more broadcasters to integrate the technology into everyday operations).

Summary of objectives:
– Increase in the number of games being virtualised (for existing and new customers)

– Commence roll out of next generation optics technology at scale

– License the technology to more partners

– Increase in the media value of the virtual inventory

Find out more by visiting the Supponor pitch page here.

The feature above was originally published on crowdcube.com

As with all investments of this nature, capital is at risk. Please Invest Aware.