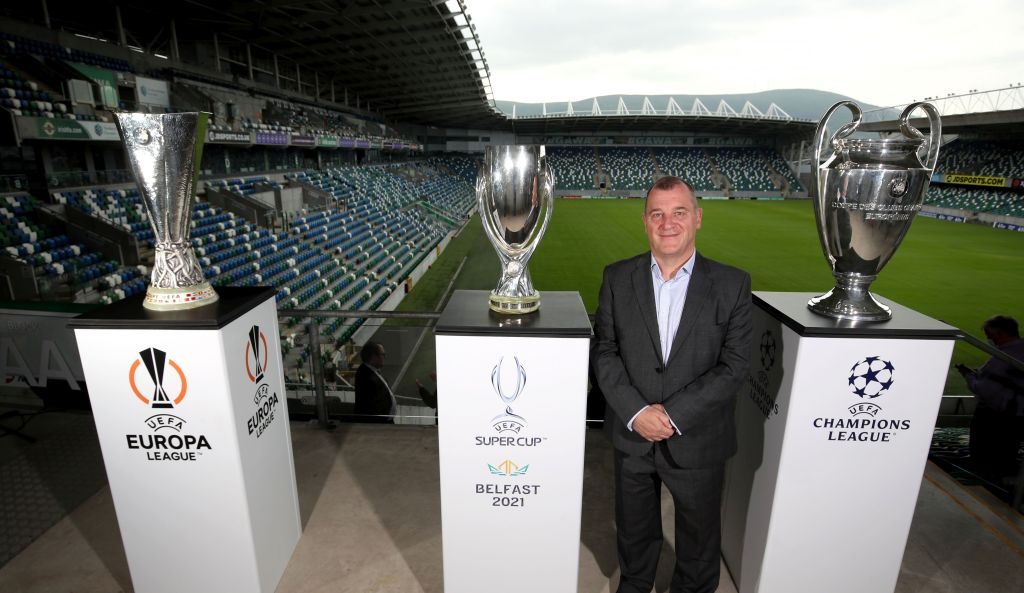 The thriving, ever expanding capital of Northern Ireland has undergone a cultural facelift in recent times with the sport mad city is a regular destination for people across the British Isles, Ireland and across Europe. The Irish FA is the hub of all its football activity, working hard to increase participation levels from girls and boys from all its communities and also using the game to foster greater cohesion. We spoke to Irish FA Chief Executive, Patrick Nelson, about how the organisation came to host one of global football’s most esteemed fixtures and how its new five year strategy will provide the catalyst for more prestigious games to come to Northern Ireland.

The journey to this month’s showpiece European club match began in 2011 when the Irish FA kicked off the project – along with government partners in Northern Ireland – to rebuild what was then called Windsor Park.

The Chief Executive explained: “We worked hard with the government and Linfield FC, the Northern Ireland Football League club with whom we share the ground, and redeveloped the stadium at a cost of £38m to which the government contributed a very large share.”

The major redevelopment of the stadium – football matches were first played on the site in south Belfast in 1905 – was carried out between 2014 and 2016.

“Once we had the new stadium and gave it a new name, the National Football Stadium at Windsor Park, we realised how positive it could be not only for us but for Belfast and the whole of Northern Ireland and we made it our ambition to bring big events to it,” Nelson revealed.

The first of those big events was the UEFA Women’s Under-19 Championship back in 2017. The association was set to follow that with the UEFA Men’s U19 Championship last year, but it was cancelled due to the Covid-19 pandemic. However, UEFA subsequently awarded Northern Ireland U19 tournament hosting rights for 2024 instead.

Nelson further revealed: “We firmly set our sights on the UEFA Super Cup because it was the only UEFA domestic final we had the stadium capacity to bid for. This would be the biggest club game to be hosted in Northern Ireland if we were able to pull it off.

“We spent a lot of time building our bid, lobbying in and around UEFA, talking to presidents and general secretaries about how wonderful Belfast is and how great it would be if we were able to show off our national stadium to the football family right across Europe and beyond. And, after bidding twice previously, we were successful third time around.”

He noted that to some extent the bidding process was normal business because “it’s what presidents and chief executives of national associations do”.

“We are no different from our counterparts across Europe by constantly thinking ‘what can my association do to contribute to the aims and objectives of UEFA?’” the Irish FA Chief Executive pointed out.

“Our view is simple: UEFA is a great business partner and we try and help them out as much as we can, for example providing consultancy to them and fellow national associations, and it was in this vein that we saw this as an opportunity to host a key fixture on UEFA’s behalf.

“We set about speaking to the various presidents and general secretaries, particularly those on UEFA’s Executive Committee, and compiling an excellent technical bid which outlined the stadium, hosting and city concepts. We weren’t shy about saying to fellow football leaders right across Europe that the Super Cup would be brilliant in Belfast.”

He believes the association is held in good regard within the corridors of UEFA. The association’s previous president, David Martin, was on the board of the UEFA Events Company and part of its strategy development group.

Nelson continued: “We painted the picture that Northern Ireland is a great country and one that loves, and is very welcoming to, tourists. And now we can say to the world ‘come to Belfast’ because we have a football stadium we can be very proud of. It is a great location for the final and the fact we won the bid bears that out.

“Some people have an outdated and preconceived idea of Belfast. To misquote the late writer Alan Sillitoe, ‘whatever they say we used to be that’s what we’re not’!

“Belfast is a fast growing and vibrant city that is very welcoming and we want to show that off. Our partners at Belfast City Council and Tourism NI are equally as excited by this and only saddened by the fact that Covid means we’re restricted in different ways.”

He explained Chelsea FC and Villarreal CF will be playing at a compact, world class stadium and nothing will be lacking in terms of preparation for the teams.

“We’re confident that it will whet the appetite of fans that are able to travel to perhaps come again in the future,” the Chief Executive insisted.

From an internal perspective the Super Cup is the handing over from one five-year strategy to another within the Irish FA.

“Within our previous strategy we foresaw that this was the type of event we should be bringing to Northern Ireland and part of our new strategy, due to be launched later this year, will be to explore how we build on this,” said Nelson.

“It also marks the end of David Martin’s time as Irish FA president. He’s only just given up the position but was very much part of the team that helped bring the Super Cup here.

“And our new president, Conrad Kirkwood being in attendance just six weeks after being elected will no doubt spur him on to want to work hard to ensure more of these events come to Belfast during his term.”

He further revealed the Irish FA would love to bring the UEFA Women’s Champions League final to Belfast in the future.

“The women’s game in Northern Ireland is on a high after our national team qualified for the UEFA Women’s Euros to be hosted in England next summer. And who knows, maybe we can even stake a claim for the men’s Champions League final at some stage after that,” he said.

“We’re already looking forward to hosting the Men’s Under-19 tournament in 2024. We’ve got a great stadium, a great city and we want to showcase it as much as possible.”