Ben Haworth explains how he’s developed a first class CV through VSI’s Executive Education programmes and a little help from Klopp and Co.

Iconic German Manager, Jurgen Klopp would impart the experience of a life-time of leadership as he covertly puffed on his favourite cigarette during breaks from leading the Merseyside giants back to the summit of world football. He was handed the Anfield reigns after Brendon Rodgers fell agonisingly short of returning the club to its former glories. 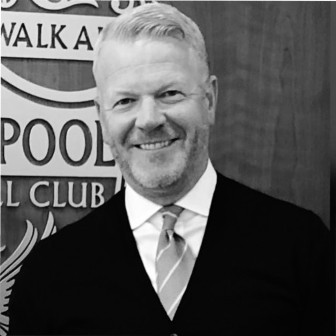 And Haworth, a recent graduate of VSI’s elite CEO of a Sports Organisation programme and former player with Leeds United, Bolton Wanderers and Sheffield United, enjoyed the remarkable insight as to how Klopp set about the task at one of the true global sporting giants.

Lapping up the learning in that twenty minute one-on-one master class he admits it inspired his own executive ambitions. He revealed: “Jurgen gave up smoking some time ago but in those days those time outs proved priceless to me. He is one of the most charismatic individuals it is possible to meet and convinces players and pretty much everyone around him that there are no limits as to how far they can progress.”

Having hung up his boots, Haworth first started making waves in the business of sport with Manchester-based solicitors JMW, where as Head of Sport, he delivered a wealthy and ever expanding client base and it wasn’t long before American sportswear company, New Balance came calling.

Trading as Warrior, they had blown the likes of Adidas and Nike out of the water in completing a record £25m shirt deal with Liverpool and it was Haworth who was tasked with maximising the value for both parties as he looked to build the company’s football business in Europe.

He was handed an office at Melwood and declares himself “wonderfully privileged” to have worked with some of the game’s true greats including Kenny Dalglish and legendary club captain Steve Gerrard.

Leading Liverpool executives Ian Ayre, Peter Moore and Billy Hogan are some of the very best in sport and he could not help but learn from watching the way they operated but it was those nicotine fuelled moments with Klopp and his golden nuggets of advice that fired his appetite for self improvement through education as he looked to acquire the skills needed to sit at the top tables in sport.

He revealed: “The whole New Balance experience was wonderful but the relationship with Liverpool was special to me.

“I met some exceptional people and every day was a learning experience. I doubt there was time spent at Melwood where I didn’t acquire new knowledge but it was the time spent with Jurgen and observing him where I just thought wow!

“He has this ability to make everyone feel special but at the same time demand the highest standards from them which I think is critical in great leadership.”

Maximising your talent is one of Klopp’s often declared themes and that certainly resonated with Haworth.

“I’d be there with him having his crafty ciggy and his ability to crystallise any complex concept was unreal. He is a natural leader in many respects but is humble enough to always want to learn more and he is a deep thinker.”

The 48-year-old Yorkshire-man shares Klopp’s constant yearning for success and progressed to the position of Chief Operating Officer with Base Soccer where he helped the company successfully complete a complex sale and was happy to take a consultancy position with the new company as he plotted the next steps of his career.

He said: “I found myself in the fortunate position of being offered a number of really interesting executive positions but I had set my mind on taking some time out and for the first time since my teenage years focusing on my own self improvement.

“During this period of contemplation, I was able to counsel many people in the industry over options that were open to me in the education space.

“VSI Executive Education is a company with a strong reputation for working with high profile individuals from the industry of sport and equipping them with the skill-set to sit in key strategic lead positions.

“I have a life time of experience but I wanted to adapt some of my existing skills to those required to be a Chief Executive in sport.”

Co-founder of VSI Executive Education, Tony Faulkner was himself a former player at Manchester City before suffering a catastrophic back injury that brought his career to and end at a desperately young age.

He ultimately turned to education to resurrect his life, first as a Physiotherapist and then Performance Director before moving into executive education.

Neuro-science and understanding how the brain drives performance fascinated him and he set about creating a number of post-graduate executive education programmes that deliver access to the boardroom to a more diverse group of leaders, often with a vast performance or coaching background who wanted to move beyond the grass pitch.

Faulkner says: “The CEO and Sporting Director are two key functions in a sports organisation and our programmes have focused on delivering the leadership skills to equip people for success in these positions.

“There is a massive body of research that shows cognitive diversity in any organisation is critical to maximise success. The individuals who complete our programmes are very different from what has too often in the past been a one dimensional leader.

“Ben is a great example of a richly talented individual with a first-class CV who after studying with us for the last year will be a massive asset to any sports organisation.

“He will testify that the learning he enjoyed with us is vocational and real world, not that I would claim to be competing with a daily engagement with Klopp! The formal take-aways he enjoys along with our own master-class engagement will allow him to function at an elite level.

VSI has recently created a partnership with the Global Institute of Sport (GIS). This will allow a global roll-out of their programmes with GIS operating from hubs in some of the great sports arenas of the world, including the homes of New York Red Bull, Atlanta United, Inter Miami, Toronto FC and Australia’s MSG.

“Our network has always been a major attraction for those studying on either the CEO of a Sports Organisation or our Masters Degree for Sporting Directors,” Faulkner added.

“Lifelong friendships are forged with those you studying with and I could give you countless examples where those relationships result in alumni working for each other, with each other or helping to secure jobs for each other.

As Klopp continues to drive Liverpool’s fortunes, Aston Villa have recently secured the services of his former Anfield star and possible heir apparent, Steven Gerrard and Haworth highlights how he has also impacted on his evolving leadership style.

“He is very serious when it comes to work and demands the highest standards of players, from the way they dress to the way they perform on the training ground and on matchdays,” said Haworth.

“At the same time he always has time for people not so fortunate as most of us. I’ve known him hire a private jet to visit a seriously ill child. He won’t shout about it, he just gets on with it. He is another great leadership role model.

“I benefitted massively on the programme partly because of my experiences with Jurgen and Steve. I was able to dissect their behaviours and understand just why they are so successful.”

International travel restrictions have resulted in two places still remaining on the CEO of a Sports Organisation 2022.