Rangers’ Commercial & Marketing Director, James Bisgrove shares the club’s ambitions for the season ahead as the look to capitalise on their 55th league title success.

Rangers Football Club clinched its 55th Scottish league title in the summer, nine years after being demoted to the former third division following administration. It’s been a long, hard road back to the top of Scottish football and under the guidance of former Liverpool legend Steven Gerrard, the club clinched that historic title with one of the best records in Europe. 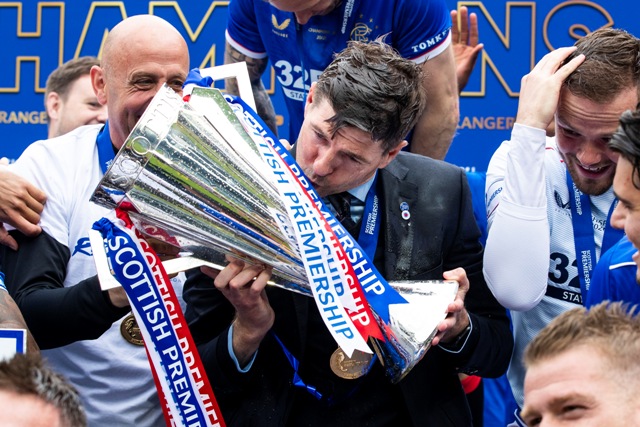 Rangers Manager Steven Gerrard gets his hands on the Scottish Premiership trophy for the first time and kisses is during celebrations at Ibrox Stadium. (Rangers FC)

Having clinched the title undefeated all season with one of the most formable defences in the country, with just 13 goals scored against and playing out 26 league games without conceding, it was a campaign to remember for the Gers. But the global pandemic had robbed the club’s ardent fans of the chance to share that glory, with no trophy lift in front of a heaving Ibrox Stadium or celebratory bus parade around the city.

Despite this the club are making ambitious plans for the next season which will see a raft of off field initiatives aimed at capitalising on the team’s success and improving the club’s commercial capabilities.

“When you win the League it makes everything that bit easier,” said Bisgrove, Rangers’ Commercial & Marketing Director as we caught up over Zoom in late April. The last time we spoke, he had just completed a full overhaul of the club’s branding and identity which were the first stages of a transformation strategy.

Bisgrove continued: “The last six months have been phenomenal, clinching the 55th title and what that’s allowed us to do off the pitch has been brilliant.” 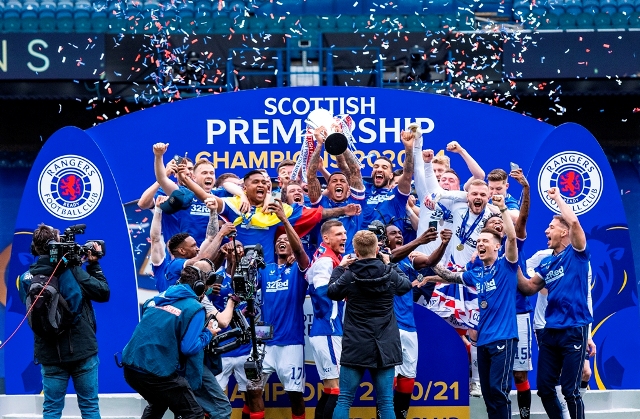 On the day of our chat, restrictions in Scotland had just been lifted meaning non-essential retail and beer gardens could reopen whilst restaurants could welcome back customers inside.

“We had a queue right the way around the stadium for the retail store opening again,” he continued. “I was delighted when the team sent me a text to say people were queuing to get in. That’s exactly what you want to see.”

In the preceding months, level two restrictions in Glasgow have stubbornly remained in place, the result of continued high Covid-19 infection and hospitalisation rates, but for the club, they are looking towards the future which will see a return of fans to the stadium. The recent Euro 2020 games hosted at Hampden Park in the city being an encouraging glimpse to the future.

“To a degree it’s been a bittersweet sense that we have clinched the title without having our supporters – all 45,000 season ticket holders – in the stadium. But we’re feeling pretty optimistic for next season and maybe even pre-season that events will change to allow us to get fans back into the stadium and we will do a proper trophy parade and celebration when we can get all the fans together.”

From a commercial point of view, Covid-19 has presented a number of significant challenges for the Champions, not least the significant impact on their revenues, something they have had to develop new ways of offsetting.

“Our Rangers TV offering has been really fundamental to giving our season-ticket holders access to our games to which we’ve sought to find ways of being able to monetise.

“Our kit and retail partnership, and the sales we have enjoyed with Castor, have been fantastic too. We’ve now surpassed half a million sales of products across strips, training wear and lifestyle products. For the opening year of a partnership within a pandemic, it’s been remarkable but it wasn’t without its challenges at the beginning. Looking ahead to next year, the opportunities are vast and that dovetails nicely to our 150th year anniversary celebrations.”

With the 55th title firmly in the club’s vast trophy room, attention now turns to next season which will see them make a defence of the SPFL title, whilst navigating their to the UEFA Champions League from the third qualifying round matches in addition to preparing for  the club’s 150th anniversary celebrations in March 2022.

But it will be the significance of their European exploits which will be the focus of attention for Bisgrove and his team with the chance to play in the UEFA Champions League being highly lucrative for the club commercially.

“When we’re looking at what we’re able to do next season a lot of that will fundamentally be determined on the European competition in which we will operate. If we are back in the Champions League, which is where we feel a club of Rangers stature belongs, then we feel that will open a lot of exciting doors for us in terms of how we want to grow the brand of the club internationally and among our commercial partnerships.”

European football will present a hugely significant boost to Rangers’ revenues and two scenarios will play out depending on which competition they end up playing. The first is the club’s budget and resources available to execute their international strategy and secondly how aggressively they can move that forward.

With partnerships established in two key markets, North America and India, the club are looking to expand further and have recently formed a partnership with Star Sports, one of India’s biggest broadcasters along with developing a relationship with the ISL which is now headed up by former Rangers CEO, Martin Bain.

“We’re working hard with all our commercial partners to make sure we’re delivering value,” Bisgrove explained as they move from what has, by necessity in the face of the pandemic, a focus on digital delivery. “More and more we are ensuring we’re providing and delivering rights, whether that is access and player appearances or developing content together, every partner is different in the value they place on, or recognise, value in the partnership and the objectives that underpin those.

“We’re taking a custom view on that and working with every partner to make sure we amplify the positivity of us being the Champions that they can also share in that success.“

Sitting central to the club’s 150th Anniversary ambitions is New Edmiston House, a state-of-the-art facility which will house the club’s long-awaited museum, a new two-storey Rangers Store and provide an events space for use on matchdays and beyond.

“We’re in a great place with Edmiston House, it’s the pinnacle for what will be our 150th anniversary season next year,” Bisgrove continued. “It’s such a milestone for the club and also a unique milestone in European football. I think Rangers will be the first club playing in European competition to celebrate that milestone and it speaks of the incredible history that Rangers has as a club.”

Rangers will celebrate 150 years in March 2022 and have a rich schedule of activities in the planning with the opening of New Edmiston House central to that.

“The opening of New Edmiston House will be the pinnacle for us and the programme is now under construction. We’ve just appointed the General Manager for the building who comes from a very strong music background and will help us deliver an excellent music strategy. This will ensure there is a really rich schedule of concerts, gigs and acts.

“We want it to be a multi-purpose venue but with a real emphasis on music because culturally, that is something Glasgow is famous for. “

“The venue is quite clever in how it is set up and will allow us create a fanzone space outside where we will have a mini-pitch, food & beverage stalls and a stage for entertainment.

“It will be a great place for supporters and families to spend time before and after games, but we’ll also use it to live stream games when we’re not playing at Ibrox, whether that is domestic games or European games.

“It will serve a purpose as a matchday fanzone and club event space but will also stand in its own right as a separate entity to Rangers as a leading multi-purpose venue in the west of Scotland. The versatility of the venue is absolutely key to us.”

Whilst Edmiston House is the pinnacle of the club’s aspirations, they’re also investing heavily in improving the fan experience within Ibrox Stadium itself. Rangers’ last played in front of supporters at Ibrox in March 2020 when nearly 48,000 fans  saw them beaten by Bayer Leverkusen in the Europa League.

“We’ve already completed the process of having a fully connected stadium having wifi running all the way through it. We’ve upgraded all the matchday kiosks so they’re all now contactless payment compatible. Both of those things might sound pretty obvious but the last time supporters were here they could only pay with cash. We’re also looking at NFT access systems and adding additional retail units within the stadium concourses. We’re taking huge jumps forward here.

“Other areas that will also see significant investment are in our hospitality lounges and in our premium spaces. We are renovating two of the biggest lounges in the stadium and the project that I’m most excited about is the Blue Sky Lounge.

“That will be the top hospitality experience in any Scottish stadium. It will feature a panoramic, glass fronted lounge that will stretch the entire length of the Sandy Jardine Stand and will operate as the club’s restaurant seven days a week but will also be a hospitality lounge for clients every matchday. We’re putting in new premium seating which will increase the capacity of the stadium by c300 seats.

“As fans do start to return to the stadium from next season, they’ll see quite a transformation from the Ibrox they remember in terms of its modernisation but also, at the same time, taken with a great deal of respect for the history and the legacy that this great stadium has. We want to ensure that feeling is never lost.

“Everyone knows how challenging last 15 months have been but we’re now very focused on the next 12 months and are very optimistic of what that brings. Hopefully that allows Rangers supporters of all ages to reconnect with the club and we can have as many fans in Ibrox as possible at the start of the new season – that will be special.”