Clubs and players have used innovative ways to support their communities during coronavirus, showing the real value of football to society.

The power of football off the pitch is being shown in all its glory during the coronavirus. Clubs big and small – who may have concerns about their own existence – are putting them to one side to help the wider communities around their club.

There are many stories to talk about – too many for this article. They are all an example of how football gives more back to society than it is credited for, and why the various governments of the UK and Ireland need to seriously support football clubs during and after this pandemic to continue to deliver community support.

Help ranges from a whole football stand being handed over to the NHS as an outpatient’s clinic by Plymouth Argyle, to football players walking a pre-lockdown marathon to raise funds for an Irish cancer charity.

Aston Villa shared unused food with local homeless charities before they closed the ground and were closely followed by many other clubs. Stevenage’s kitchens were kept open to cook for locals requiring hot meals with the likes of Swansea City offering the same.

Northampton Town manager, Keith Curle, is one of several football managers who have been calling elderly and vulnerable season ticket holders to check-in on them during their period of self-isolation.

Peterborough United owner Darragh McAnthony held a video conference with 40 self-isolating elderly fans whilst bosses at Plymouth’s Home Park saw offering their currently-unused ground as an easy win for the local health services in the fight against coronavirus. They will use the space to keep ongoing GP and outpatient appointments away from the city’s main Derriford Hospital which will concentrate on helping those with the virus. 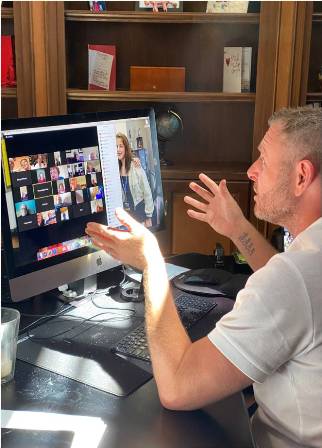 “In line with our vision and values as a club for the region, the Argyle community feels duty-bound to support local services in this time of need,” said chief executive officer Andrew Parkinson. “With staff currently working from home and no football in the immediate future, offering up Home Park for the use of the NHS is, we feel, our civic duty.” 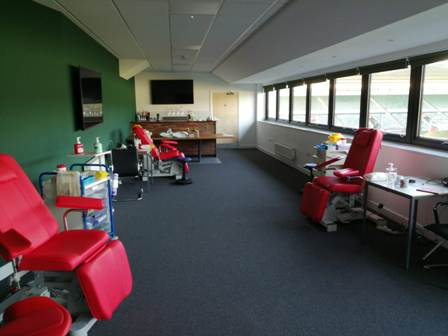 And whilst all this extra support has been delivered, the ongoing work done by football Community Trusts continues across the UK and Republic of Ireland.

The Premier League has opened-up its Premier League Stars reading and writing learning resources to all parents, carers and home schoolers, as opposed to sharing them with schools direct. Meanwhile, Dundee United’s Community Trust is aiming to keep kids’ English skills sharp by starting up a match reporting competition and Barnsley are looking for children to have a go at commentating, with a prize of being a co-commentator at a real game when they start back.

The 900,000 people helped by EFL member community trusts are still being supported, with Cambridge United and many others running their fan fitness classes online and Macclesfield academy students taught through online learning.

In Scotland, Partick Thistle hit the headlines with its response to the coronavirus, with ITV’s News at Ten filming their players doing lockdown shopping runs for fans and revealing that the club has decided to change its name from Partick Thistle Football Club to Family Club.

Thistle Chief Executive Gerry Britton, said: “We know we are part of their lives, so we’ve taken it a step further and are making calls to fans to offer help or just a chat.

“While this situation continues, football is irrelevant. But what it does show is that there is a strong community surrounding our football club and many others in Scotland. When harnessed, that creates a power to do amazing things. All we are doing is repaying our fans for standing with us over the years – we are now doing our best to stand with them.”

Even non-league sides, which have more money worries than most during this crisis, are supporting the communities that support them, such as Maidenhead United.

“The big benefit we think we bring in a situation like this is trust,” says club chief executive Jon Adams.

“We were unfortunately hearing tales locally of people offering help to vulnerable people, but then taking cash off them and running away. We worked out we had 50 club workers and volunteers who were DBS cleared for working with vulnerable people, so we instantly had a mini-army of trustworthy, reliable people who we could offer to help.

“We also had a telecoms partner who could set up a helpline for us all to access from our homes. We know many people use social media, but there is a section of our community that only deal by telephone, so we needed a helpline for them to call.”

And that mix of trust and technology has paid off.

“A woman from Brighton heard about our helpline and asked if we could keep an eye on her 80 year-old dad in Maidenhead who was self-isolating,” continued Adams. “So, we’ve checked in on him and one of our guys did his shopping the other day – he had to go to three separate supermarkets to get it all due to the panic buying!”

The challenge now for the helpline is keeping it staffed as all salaried staff have been furloughed do help lower the financial burden on the club.

“Those that were staff working on this project have decided to offer their services as volunteers to keep it going. So, we have designated ourselves one person to help and we dedicate our spare time to them.”

Football players in every league – often criticised for being unaware of their fans or too rich to care – are lining up to do their bit.

When Irish League side Glenavon’s Conan Byrne was told there would be no football to play, he set the clock running on a charity challenge which was a nightmare to organise as the Republic of Ireland headed to lockdown.

Keen to raise money for Irish Cancer Research, he had just four days to organise a 26-mile sponsored walk around all six of Dublin’s League of Ireland clubs before restriction of movement rules would have stopped him from doing it. 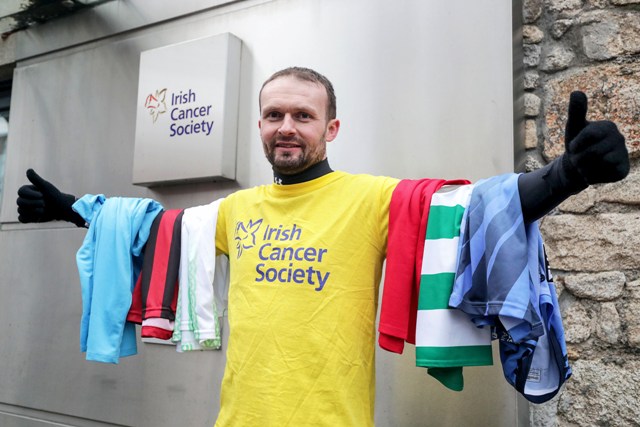 “I asked our manager if he was OK with me doing something big for the charity and he said go for it. The whole club has been so supportive.

“I was worried if I run a marathon or did a bike ride, I might do myself an injury and not be able to play when the season restarts. So, me and my fiancee thought why not do a sponsored walk around all the League of Ireland clubs in Dublin. I used to play for one of them (St Patrick’s) so it seemed like a great idea. I even wore the shirt of our arch enemy Shamrock Rovers for part of the walk – that was the toughest part of the whole thing!

“But then we realised the social distance and lockdown rules were kicking in. A 26 mile walk is a bit more than ‘one bit of daily exercise’! Also, lots of people wanted to come on the walk with me, but we couldn’t have a gathering like that. So, I walked it on my own and kept people up to date with Twitter posts and a live stream.

“We’ve raised over €14,000 through my gofundme page as we speak. All the clubs I walked to have also been generous in their support and it just reinforces my view that football is a force for good.

“The media needs to talk far more about the positive stuff football does rather than constantly producing ‘top 5’ features. At Glenavon, all the players are involved in delivering food parcels and medical supplies to those in need in Lurgan. We have a timetable of who’s on shift to help.

“People support the club, so we need to support people when they need us.”

All Rover the community

An Overview Of The Biggest Sponsors Of The Bundesliga 2022-23