England has the second most valuable squad behind France based on insurable value but is expected to fall short in the World Cup finals.

Lloyd’s, the world’s specialist insurance and reinsurance market, has today released research with the Centre for Economics and Business Research (Cebr) ranking teams in this year’s FIFA World Cup based on the collective insurable value of players.

England’s rise to second place has largely been driven by its youthful squad and the relatively high salaries paid to players in the Premier League. In terms of total insurable value the English side is ranked second, behind France (£1.4bn), and the average insurable value of one English player is more than the entire Panama squad. This also marks an improvement from four years ago when England were behind Spain in third place.

The best online betting offers are available for England to finish top of Group G, the most valuable group in the tournament with a total insurable value of £2.3bn, but are expected to lose out on a spot in the final to the eventual winners, France, in the semi-finals. 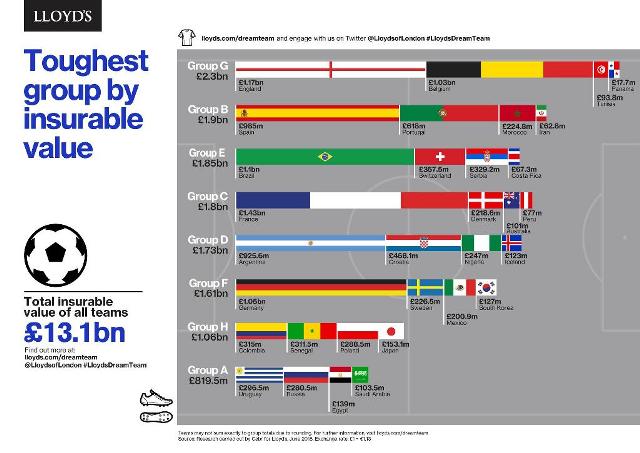 England has notoriously failed to deliver in major finals and the team’s high insurable value is at odds with its FIFA world ranking that currently places the team in 13th place.

Similar analysis was undertaken by Lloyd’s and Cebr ahead of the 2014 FIFA World Cup which correctly predicted that Germany would be victorious.

The research also provides insights into the average insurable values based on positions and age of players. For example, forwards are the most valuable players, with their legs being worth £19.2m on average, although midfielders have the largest share of total squad insurable value (38%). Players aged between 18-24 years old have on average the highest insurable value at £20m.

Cebr used players’ wages and endorsement incomes, alongside a collection of additional indicators, to construct an economic model which estimates players’ incomes until retirement. These projections formed the basis for assessing insurable values by player age, playing position and nationality.

The analysis enabled Lloyd’s to predict who would qualify from their respective groups. Thereafter, Lloyd’s has plotted the path of each team in the knockout stages based upon their insurable values. The team with the highest insurable value in each match is the team Lloyd’s predicts would win and progress.

The research was supported by Sporting Intelligence, who provided anonymised footballer salary data for each of the 32 teams participating in the 2018 FIFA World Cup, based upon an indicative 30-man squad for each nation.

Victoria De’Ath, Lloyd’s Class of Business, said: “We’re delighted to see the ‘Three Lions’ in such good standing this year. England’s earning potential dwarfs the majority of those in the tournament this year and is a partly due to the youthfulness of the squad and the financial power of the Premier League.

“I look forward to seeing how the team performs and whether or not Lloyd’s predictions turn out to be true for a second tournament in a row.”