Despite a turbulent season, this year sees Real Madrid leapfrogging Manchester United who, after three years of stability on the podium, drop to second in the “Football Clubs’ Valuation: The European Elite 2019” report, prepared by KPMG Football Benchmark team,

The aggregate enterprise value (EV) of the top 32 clubs in consideration has increased by 9% year on year, demonstrating that the football business is growing at a significantly faster pace than Europe’s economy in general. These are the most striking conclusions of KPMG’s Football Benchmark team’s latest club valuation report. 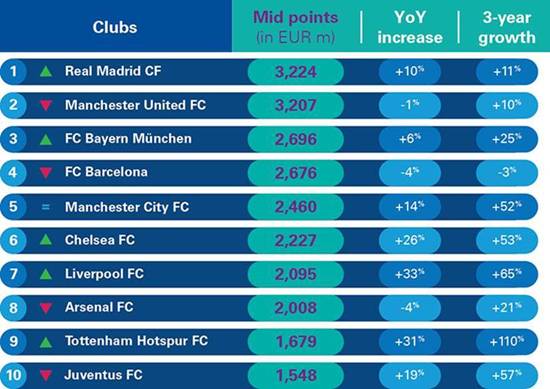 – Real Madrid and Manchester United are the only clubs above the EUR 3 billion threshold for EV. The top 8 clubs can boast an EV in excess of EUR 2 billion, with Chelsea and Liverpool having joined this group.

– Although the top 10 consists of the same clubs as last year, all the clubs changed positions, with the only exception being Manchester City, which retained fifth position.

– The four English teams competing in the finals of the UEFA Champions League and the UEFA Europe League come one after the other, with Chelsea, Liverpool, Arsenal and Tottenham taking the 6th to 9th positions.

– Real Madrid jumped above the EUR 3 billion EV level for the first time, however, their current EV is lower than Manchester United’s EV was last year, which has decreased by EUR 48 million over the year.

Real Madrid can attribute their success of taking the lead primarily to the massive UEFA prize money rewarding their three UEFA Champions League titles in a row. In addition, they benefitted from their improvement in profitability and from a cumulated 29% operating revenue growth, driven mainly by increasing commercial revenues over the past four years.

Further changes in the top 10 include Tottenham Hotspur surpassing Juventus to reach the 9th position, and Arsenal dropping two spots to land in 8th, surpassed by Chelsea and Liverpool. The latter two clubs boast an EV in excess of EUR 2 billion for the first time, making eight of the top 10 clubs to have now more than EUR 2 billion EV.

The two 2019 UEFA Champions League finalists boast remarkable financial performance in the past season: Liverpool’s 33% annual EV growth is second only to Inter Milan’s 41% year-on-year increase in our ranking, while Tottenham came in third with a 31% growth. They also registered record levels of pre-tax profit – EUR 157 million for Spurs and EUR 136 million for the Reds. Tottenham’s 39% staff costs-to-revenue ratio is also the lowest among the 32 clubs.

“For the third consecutive year, the overall EV of the 32 most prominent European football clubs has increased by 9% (35% over the past three years),” Andrea Sartori, KPMG’s Global Head of Sports and the author of the football clubs’ valuation report series commented.

“This growth rate is in contrast with the overall trend of the major European Stock Exchanges, notably the STOXX Europe 50 Index1, showing a year-on-year decrease of -13% (-9% from 2016), and demonstrating the different pace at which the football industry is evolving.

“The transition of major clubs into media and entertainment companies, with global brand exposure, also helps create more stable and predictable cash flows and consequently better warranties to investors and financiers. It comes by no surprise, that such remarkable growth has heated the debate concerning the transformation of European clubs’ competition structure.

“However, the stakeholders involved do not necessarily share the same interests and rather sit on conflicting positions that are likely to make future decisions even more challenging.”

The representation of the big 5 football leagues remained the same, with 27 clubs in the top 32, with the English Premier League confirming its dominance having nine clubs on the list and accounting for 43% of the total aggregate value.

This year, Scotland is a new joiner, represented by Celtic, raising the number of participating countries to nine for the first time during the four years analysed. The other newcomer this year is Spanish side Villarreal, also a debutant in this elite ranking. On the other hand, Valencia and Fenerbahçe dropped out, whereas both clubs had been on this list in all three previous editions of the ranking.

Both Spain and Italy are represented by six clubs. However, due to the top performance of Real Madrid and Barcelona, the aggregate EV of the six LaLiga clubs is almost the double of the six Italian clubs’ EV.

Interestingly, Atletico Madrid’s EV is less than a third of Real’s EV, while Juventus alone are worth more than the two Milan clubs combined, and almost three times more than Napoli. 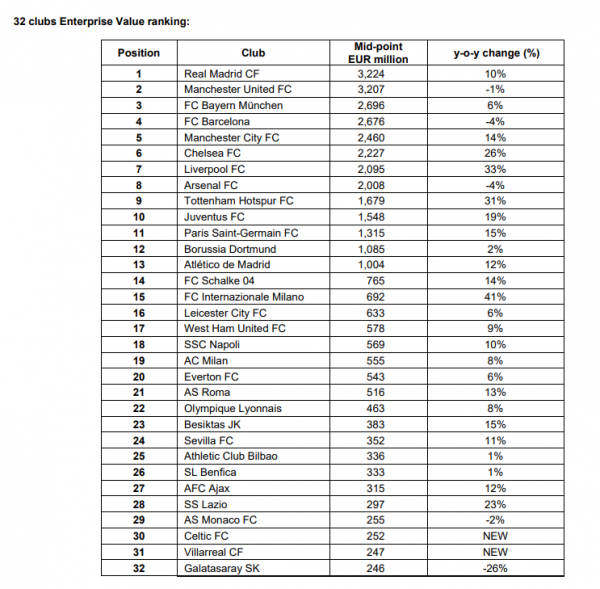 The German Bundesliga has sent the same three clubs (Bayern München, Borussia Dortmund and Schalke 04) to our ranking over the four years under analysis; all three clubs were able to increase their EV, reaching a 13% share of the total EV of the top 32 clubs.

Interestingly, the three German clubs represent more of the total EV than the six Italian ones (12%) combined. On the other hand, the three French clubs account for 6% of the total EV; PSG and Olympique Lyonnais kept their 11th and 22nd positions, respectively, while Monaco managed to step up one position to the 29th spot.

The overall representation of the non-big five leagues (Turkey, Netherlands, Portugal, and now Scotland) has been decreasing – they now send just five clubs to this elite ranking, and account for 4% of the total EV.

Turkish clubs, also due to the depreciation of the Turkish Lira, suffered the heaviest blow this year with their aggregate EV decreasing by almost a third: the 15% EV growth of Besiktas could not compensate for Fenerbahçe being dropped from the ranking, nor for Galatasaray’s massive 26% drop in EV, the largest decrease in the ranking.

Considering the 3-year EV evolution of the top 32, Olympique Lyonnais boast the highest (+150%) overall increase, followed by Tottenham Hotspur (+110%). On the other hand, Barcelona are the only club in the current ranking who suffered a decrease in their EV (-3%) over the past three years analysed.