The total transfer expenditure for 2018 across the big-5 leagues in Europe was €5.82bn, down 2.4% compared to 2017, of which was €4.71bn invested during the freshly concluded summer transfer window.

The figures compiled by the CIES Football Observatory analyses from a financial standpoint the transfer operations carried out by big-5 league clubs since 2010.

In 2018, the transfer spending of Premier League clubs accounted for 36.5% of the total big-5 league teams’ expenditure. Since 2010, English top division clubs had a net transfer spend of -€5.71bn (78.3% of the overall big-5 league deficit). Manchester City has invested the most in transfer indemnities since 2010 (€1.47bn). It also has the most negative balance sheet for transfer operations (-€1.03bn).

The report analyses the paid transactions having taken place since 2010 involving teams from the five major European championships: the English Premier League, the Spanish Liga, the German Bundesliga, the Italian Serie A and the French Ligue 1.

The figures published in the report include fixed transfer fees, eventual add-ons, as well as sums paid in the context of paying loans. The sums involved in the case of loans with an obligation to buy are included in the figures for the year in which the agreement was concluded. Within the limits of the available information, the data on recipients take into account the resale percentages negotiated by former clubs.

In 2018, a new spending record was established in two leagues: the English Premier League and the Spanish LaLiga. In the first case, the increase was rather limited (+2.1%). In the second, the increment in comparison to 2017 was very marked (+80.4%). Thanks to a better distribution of television rights and international success, LaLiga is now well-established as the second force of world football.

The rankings of clubs having invested the most in transfer fees since 2010 highlights the incredible financial power of a handful of teams. The top three comprises Manchester City, Chelsea and Barcelona. Four other teams have spent over a billion € over the eight-year period analysed. Among the heavy hitters of European football, only Real Madrid (€912m) and Bayern Munich (€554m) are situated below this threshold.

As for 2018, Barcelona has pipped Liverpool and Juventus in the rankings of the clubs who spent the most. Ten English teams are in the top twenty places. Borussia Dortmund and Monaco are the only representatives of the German and French championships. This result is largely related to the financial gaps existing between leagues of the big-5.

The spatial analysis of teams that benefited from transfer indemnities invested by big-5 league clubs between 2010 and 2018 shows that most of the money stays within these championships: 66.6% of the total. This percentage reached 69.9% in 2018. This increase indicates that the most expensive transfers involve more than ever players who have already proved themselves in the five major leagues.

AS Monaco heads the rankings of teams having received the most indemnities for transfers to big-5 league clubs between 2010 and 2018. The team of the principality earned almost one billion € in eight years. Many wealthy clubs also figure in the top twenty, while Benfica and Porto are the only two teams outside the five major championships in the top positions of this ranking.

To have an optimum understanding of the economics of the transfer market, aside from sums spent and recipients, it is essential to study the net balance sheet for operations at both league and club level. Between 2010 and 2018, big-5 league clubs recorded an accumulated deficit of €7.29bn. The Premier League is single-handedly responsible for 78.3% of this deficit. This percentage was 85.7% in 2018.

Despite the considerable investments made by Paris St-Germain during the period studied (accumulated deficit of €874m), Ligue 1 was the only big-5 championship with a positive balance (+€199m). In 2018, the net balance sheet of transfer operations concerning teams from the French top division reached a historic record of +€333m.

The rankings of big-5 league teams with the most positive balance on the transfer market between 2010 and 2018 again highlights Monaco’s exceptional case: +€289m (+€66m in 2018). In the top ten places are five teams from Ligue 1, three from the Serie A and two from LaLiga. No current English Premier League club presents a positive balance sheet over the period analysed.

Manchester City (-€1.03bn) and Paris St-Germain (-€874m) stand out among teams with the most negative net balance sheets for transfer operations between 2010 and 2018. Five Premier League teams are in the top ten places, as well as two Italians (Juventus and Milan), two Spanish (Barcelona and Real Madrid) and Paris St-Germain.

This report illustrates the incredible development of the transfer market having occurred over the last decade in parallel to the economic expansion of the five major European championships. The latter are in a position to invest increasing sums in transfer fees and salaries to attract and keep the top talents worldwide.

The English top division, more than any other championship, occupies a central position. The spatial analysis of the balance sheets of international transfers having involved big-5 league teams illustrates the key role played by the Premier League in the structuring of the market. 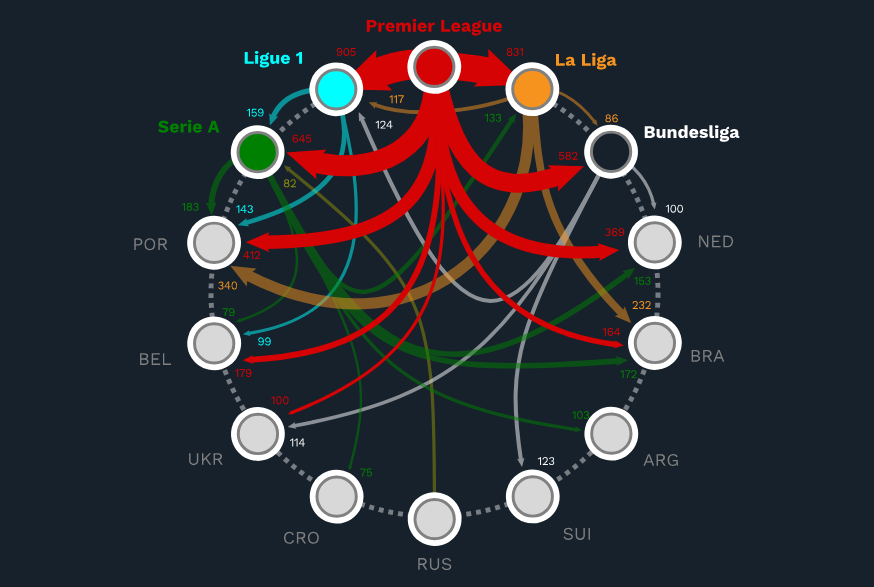 Despite the slight drop in spending observed in 2018 compared to 2017, the economic development of the top of the professional football pyramid suggests that a renewed increase of sums invested in transfer fees will happen in the near future.

Established for thirty years, this process has led to a high concentration of talents in the richest clubs. This makes possible the assembly of top performing teams. At the same time, market concentration reinforces the imbalance of competitions.

Despite the slight drop in spending observed in 2018 compared to the 2017 record year, the economic development of the top of the professional football pyramid suggests that a renewed increase of sums invested in transfer fees will happen in the near future. While talent concentration makes possible the assembly of top performing teams, it also reinforces the imbalance of competitions.