The world’s smallest football league on the Isle of Scilly kicked-off the season in style recently with a new piece of tech, and help from Vodafone.

The two-team football league on the isle, off the coast of Cornwall, used a well-known Video-Assistant Referee (VAR) system – with a twist.  Thanks to Vodafone’s 5G network, the first game of the season was introduced to FAR: Fan-Assistant Refereeing, a world first.

The huge capacity, faster speeds, and quick response times of Vodafone’s 5G service are a great way to bring supporters unable to attend a match closer to the action. Not only does 5G offer a richer viewing experience, but higher levels of connectivity allow customers to communicate simultaneously when network demand is at its peak.  This opens up a new range of possibilities for fans to experience and enjoy their favourite sports online.

While many football fans across the globe enjoy being armchair referees, it’s the supporters of the Garrison Gunners and Woolpack Wanderers on the Isles of Scilly who can now officially claim that title as their own.

Showcasing the benefits of Vodafone 5G, the FAR system gave fans the ability to review incidents just after they happened. And instead of catching up on the ref’s decisions after the game, supporters on the main island of St Mary’s were able to have their own say on several fouls, a disputed goal, and two contested penalties as the game was being played. 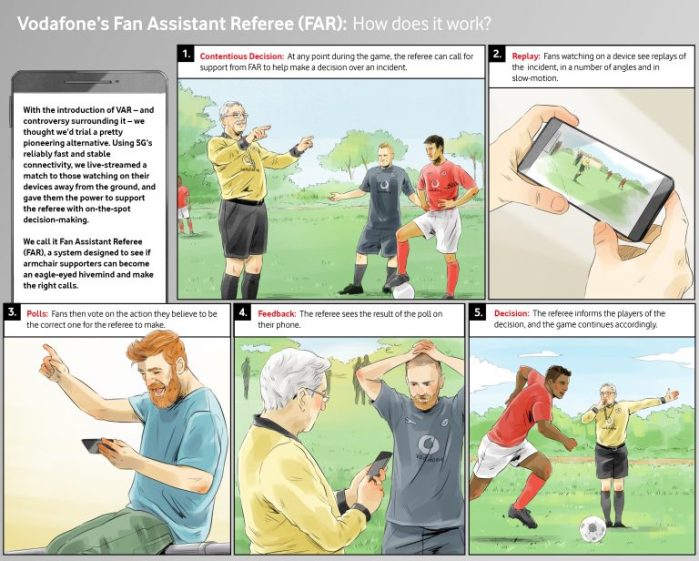 Following a quick online vote, fans’ decisions were relayed to Paul Charnock, the match official and former first division linesman, at pitch side. The Woolpack Wanderers won the match 4 – 3, with only minutes to spare.

Chairman of the Isles of Scilly Football League Anthony ‘Gibbo’ Gibbons said: “I have never seen the referee so happy after a game. He was empowered by the other islanders to make bold decisions – and not always in my team’s favour! Vodafone’s involvement with the league has got everyone excited.”

Vodafone UK’s Chief Executive Officer Nick Jeffery, said: “This was great fun for the fans, and we’re very happy to have been the first network operator to take 5G to the Isles of Scilly.”