It’s not every day you get the opportunity to hear what it’s like working with some of the best sports teams in the world from leading athletic performance experts. 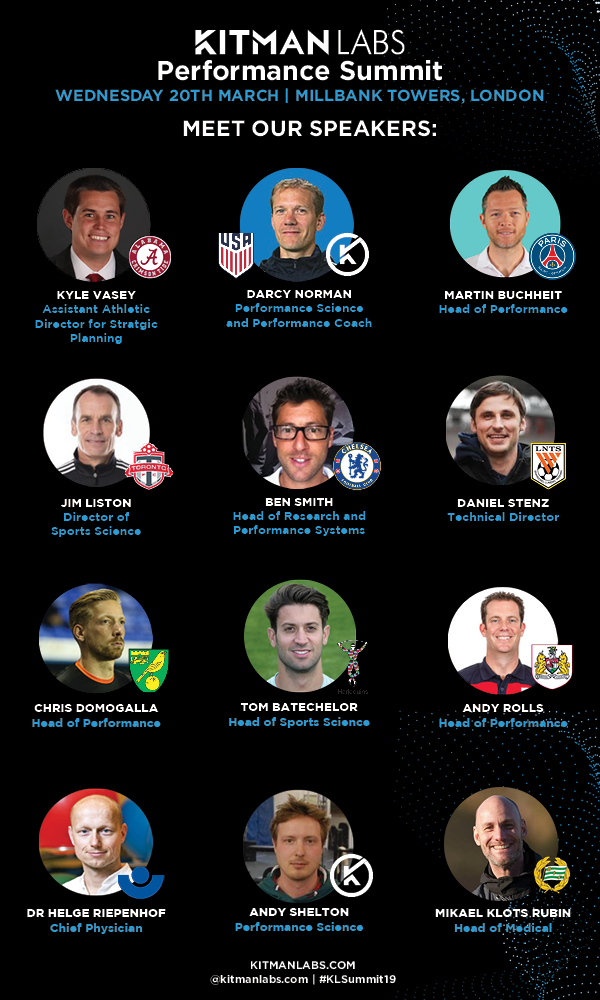 The event attracts over 100 professionals from sports teams, leagues and governing bodies to learn, discuss and network over the course of the day with a range of break-out sessions, roundtables and seminars. This year’s speaker line-up has been announced, including some of the best minds in the business. We’ve highlighted some of the key speakers we’re most looking forward to below:

Ben works as Head of Research and Performance Systems for Chelsea FC. Having worked at the club for over five years, he has been involved in the growth of Chelsea’s youth development into one of the world’s premier academies. Chelsea have invested heavily in both performance analysis and analytics and consider them an integral part of their approach to player development. Before working at Chelsea, Ben gained a multi-sport perspective on analytics and analysis with Fulham FC, the FA, Sale RFC, England Hockey and GB Wheelchair Basketball

Host of the Pacey Performance Podcast and Strength of Science, Rob Pacey is one of the foremost authorities on sports performance, regularly interviewing world class practitioners and researchers in professional sport. Over the past three years Rob’s podcast has had over 600,000 downloads across more than 110 hours of exclusive content.

Martin is Head of Performance at Paris Saint-Germain and an applied sport scientist, focusing predominantly on football. His work focuses on intervention strategies and profiling assessments that improve players’ physical and technical potential using a scientific approach. He has developed training tools and fitness tests to programme and monitor high intensity training.

Andy is Head of Elite Performance at the Premier League leading the performance department to introduce a number of programmes and initiatives to enhance performance management and to provide benchmarks for things like fitness testing across the League. Andy was formerly Head of Fitness Elite Development at Liverpool and prior to that a fitness coach to Coventry City’s first team, responsible for the day to day delivery of strength and conditioning programmes for the club’s Elite Development Squad.

Dr Riepenhof is Chief Physician at the Centre for Rehab, Prevention and Sports Medicine at BG Hospital in Hamburg. His career includes posts as team doctor for AS Roma and the German national cycling team. His focus on rehabilitation and sports medicine has seen him become a world leader in high performance sports and an authority on methods to restore elite athletic performance across a range of different sports.

Jo is an Applied Sports Scientist for the Buffalo Bills NFL team and the Buffalo Sabres NHL team. Previously she worked for Chelsea Football club and Brighton and Hove Albion after graduating from Loughborough University with an Honours degree in Sport and Exercise Science. She is one of few female employees in the NFL and is passionate about implementing research and technology to enhance the performance of athletes.

Robin is Head of Recovery and Regeneration at Manchester United. He joined the club in November 2009 as a sports science researcher before being promoted to the newly created position. His role is to help players to stay in peak physical condition, utilising scientific methods and cutting-edge techniques to promote more efficient recovery among athletes. He was also brought in as a consultant for Mexico during the 2018 FIFA World Cup in Russia.

Tickets to the 2019 Kitman Labs Performance Summit are still available at https://win.kitmanlabs.com/performance-summit-2019/

The event will run from 9am to 5pm on Wednesday 20th March at Altitude 360, Millbank Towers in Westminster, London.