The Power Of Corebine Takes Mobile Tech To New Heights 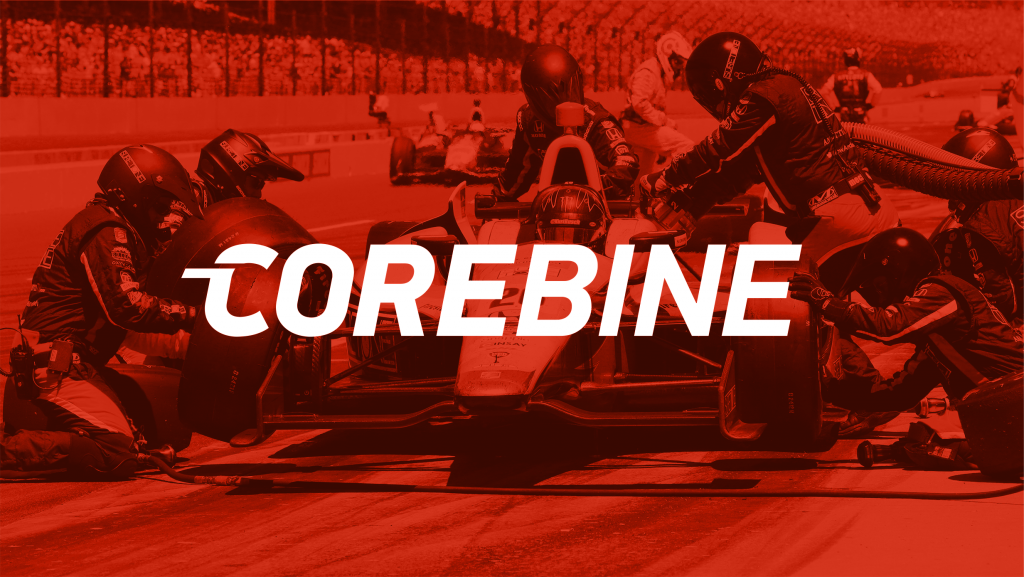 OMNIGON launches Corebine, a content delivery platform which puts the power of mobile-first technology in the hands of club executives.

The launch of Corebine, a new content management and fan engagement platform specifically tailored to the demands of sport’s increasingly mobile-first audience, is a direct response to this growing trend as Nick Arcuri, vice-president of products at OMNIGON explains.

“The desktop is not being used as much; it’s less than a majority of the time. People are, especially in sport, getting their news, information and following their teams on their mobile devices,” said Nick.

The development of Corebine seeks to address the gap that exists in traditional content publishing platforms which, originally, were not designed for fan engagement purposes or mobile devices. The launch of Corebine addresses both these needs.

“We wanted to make sure we were optimising and creating an experience for the way most people are going to engage these days,” he added.

Corebine was designed specifically with fan engagement in mind and has numerous features built in as brands and rightsholders look for ways to engage and reach fans in a meaningful way. Accounting for this, Corebine includes three ProSuite products – BracketPro, PollPro and MVP Vote – which helps deliver unique, compelling experiences that are customisable, quick to launch and satisfy additional sponsorship initiatives.

“We try to engage fans and make them interact with the content and make them feel like a part of all experiences,” Nick continued.

Working with the German Football Association on the DFB Pokal app, OMNIGON developed a ‘Man of the Match’ polling product that allowed fans to choose, in real time, their favourite player for that match. 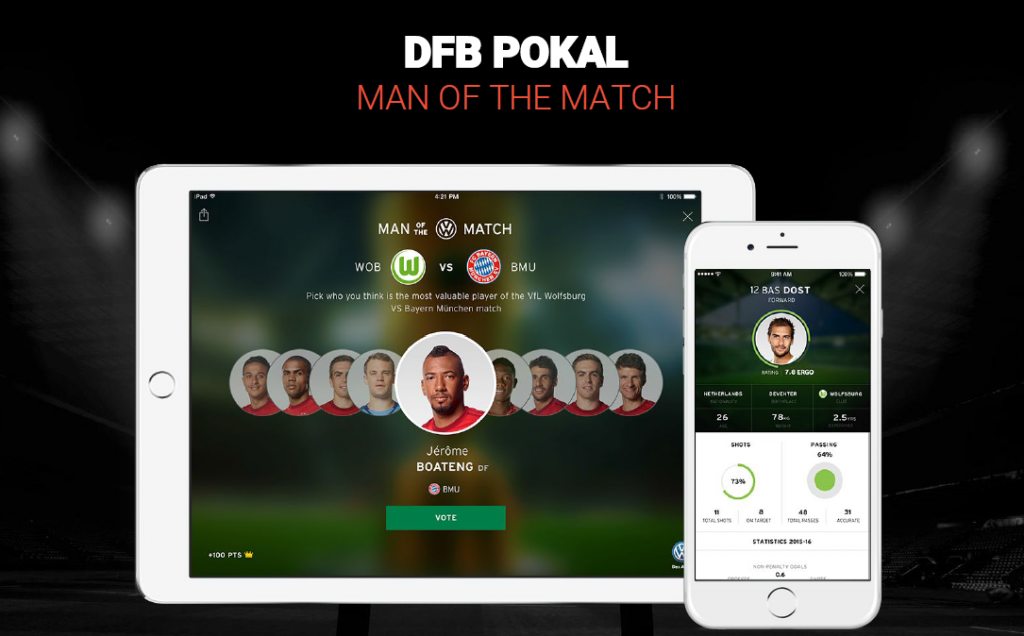 This activation was hugely successful, generating between 5,000 to 10,000 votes per match in a 30-minute period. Essential to this level of activity is the ability of the system to manage the influx of activity within a short period.

To do so, OMNIGON built a backend voting engine that is able to withstand huge numbers of votes. Demonstrating this capability, the site developed for US television channel Comedy Central garnered over 7 million votes in a couple of weeks through the platform from a series of engagements.

“It doesn’t matter if we’re talking about the final of the World Cup where millions around the world are watching, down to a match in the Championship where far fewer, but no less engaged people are watching. We’ve built this system to scale at a very high level, taking into account activity peaks, whether by call to action in a broadcast or during a marquee event. Given the nature of our business, the systems – and products – we build cannot and do not fail.”

Deriving value from these interactions is paramount and data capture allows clubs, brands and sponsors to learn more about who is interacting through the platform. This is important from two perspectives. For brands, from a sponsorship perspective, they get to know who is interacting with their content and what information is being consumed.

From a fan engagement perspective, understanding which players they voted for or which players deliver high levels of engagement can allow clubs to make editorial decisions and market them differently.

Nick adds: “You’re figuring out where your fans’ allegiances lie and you can start personalising the experience so they get value as well as the brand, club and sponsors for providing that information.”

Clubs and associations at all levels are investing heavily in data capture technology and analysis capability. Corebine provides a simple CRM system that not only captures and stores data but can also integrate with another CRM platform that may already be in use adding to, and enhancing, any data that is already flowing into that system.

Another point of difference with Corebine is its speed to market. With Corebine, sites can be launched in 2-3 months compared to custom deployments which can take up to 6+ months to develop and build. Having a website designed and built in a short timeframe is something that today’s sports clubs can derive real value from.

“The longer it takes to develop something, the more costly it is and the less time you have to react to changes in the marketplace,” Nick adds.

“If you want to launch a site in two months because the new season is right around the corner and you don’t want to launch mid-season, speed to market is important. The quicker you can develop something, the less it costs and saving money is important from any business perspective.”

OMNIGON partner CONCACAF, the governing body of North, Central American and Caribbean association football, was one of the first properties to launch sites on Corebine with the Gold Cup which ran through to 26th July being their first.

During the Gold Cup, CONCACAF informed OMNIGON that they were launching a new league later in the month and weren’t sure if they would have a website for it or the ability to add it to their existing website.

Utilising the speed of development capability of Corebine, a new Scotiabank CONCACAF League website including all data integrations, new skin, logo and colour scheme along with entirely different editorial content was launched two days ahead of the first match. 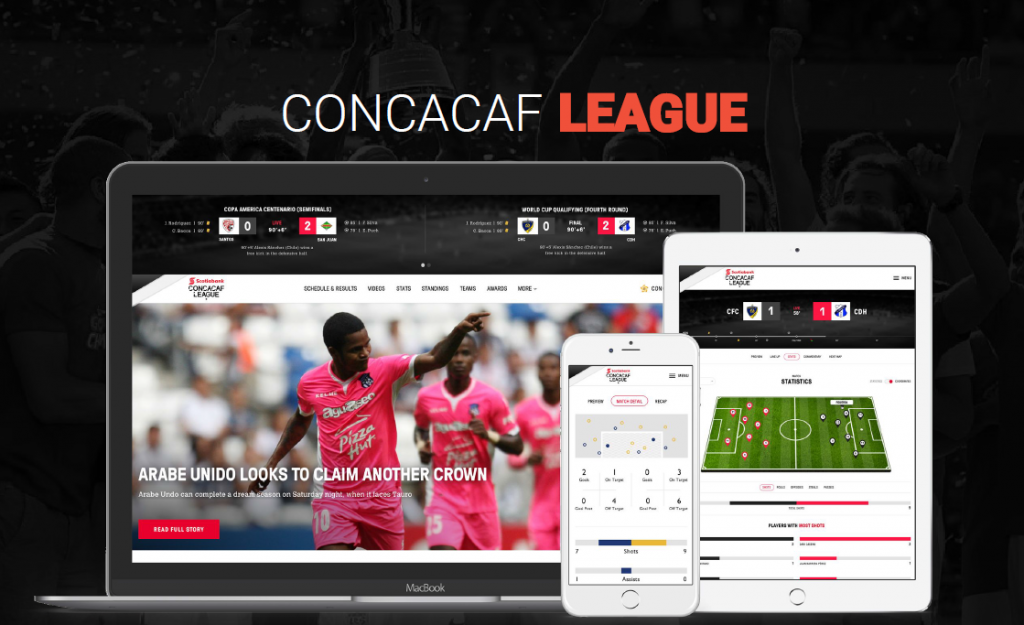 “We were able to launch this site in about two and half weeks – in both English and Spanish language – which is really unheard of,” Nick said proudly.

Another powerful benefit of the Corebine platform is the flexibility and control it gives to brands’ editorial teams. This gives the content creators and editors the ability to create new content (text, images and videos), while integrating sponsorships, without involving OMNIGON.

“CONCACAF had a great example with Uber where they had created an activation around the semi-final and final matches of the Gold Cup. They set it up themselves and they got approval from Uber to integrate the sponsorship. We didn’t even know they’d done it. They basically created this entire experience with Uber on their own because of the ease of use of the platform.”

“We are keeping pace with innovations and quality access across our digital channels through OMNIGON’s proprietary content delivery platform, Corebine. It has enabled our organisation to bring Gold Cup and Scotiabank CONCACAF League action to a live, real-time moment, further enhancing the fan experience at every match.”

Corebine is transforming the possibilities available in digital fan engagement providing powerful tools that enhance the user experience and combine speed of development with ease of use which performs to derive maximum commercial impact.